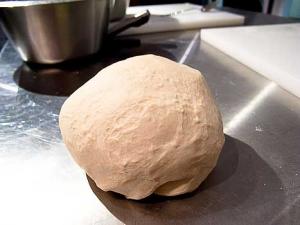 ‘It’s like squeezing a baby’s bottom,’ says Gizzi Erskine talking about how a well-risen, knocked back piece of dough should feel. I’m thinking of something else entirely but as the majority of people at this demonstration are women I decide to keep that to myself.

Making bread is one of the oldest human activities, well second oldest obviously. The magical alchemy that comes about when flour meets water and yeast is ancient. To make bread by hand is to spiritually link with our ancestors and to turn out good bread is not as hard as people may think.

One thing that helps is the new modern yeast. Allinson’s, who have laid on this practical bread making demo, sell fast-action granular yeast, which considerably shortens the ‘proving’ or rising time. You can actually buy a big block of fresh yeast from Sainsbury’s for about 99p (ask at the bakery counter) and it does freeze successfully, but for guaranteed results the individual sachets of fast action are best, not least because being in sachets each ‘dose’ is always fresh and ready to go to work.

This is Gizzi’s opinion and, leaving aside the fact that she is being paid to promote Allinson’s, she is almost certainly right. She is a bit of an expert on baking bread, as the lovely crusty loaves she brought with her in a ‘here’s some I made earlier’ way prove.

Of course the very best artisan loaves are made the sourdough way, with naturally occurring yeasts snatched from the air in the kitchen and used to create a starter, or ‘mother’ dough. This sort of baking takes considerable time though; 12 hours to make the initial sponge then about another 8 for the dough to slowly rise. Get your timings wrong and you’re getting out of bed at 3 a.m. to put the bread in the oven, ask me how I know.

You see I do make bread. I started with a bread maker, but after a bit I got fed up with the ridiculous ingredient list (milk powder being one), the lack of a sense of involvement and the fact that the paddle thing always ended up stuck inside the loaf where it either blunted my bread knife or had to be laboriously dug out with deleterious effects on the bread’s shape and integrity. 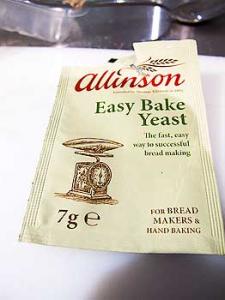 Then I tried the real thing but my kneading skills needed honing, I got bored, didn’t do it properly and the bread was awful. Discovering what the strange Captain Hook attachment on my old Kenwood mixer was for was a big help, now it does the hard work for me.

But you can’t feel the dough that way, which brings us back to the baby’s bottom. We have mixed strong plain white flour (it must be strong i.e. high in glutens as labelled on the bag, not ordinary bread flour) with a sachet of fast yeast, some oil, sugar (to feed the yeast), salt to stop the yeast growing into a Dr Who monster, and of course water.

This, under Gizzi’s direction, we slowly bring together in a bowl into a sticky mass. It’s important not to add too much water; the recipe specifies a precise amount but each flour absorbs water to a greater or less degree so it needs care. You’re looking for the dough to become a bit sticky and cling to your hands. Kneading will take care of the rest.

I feel the need, the need to knead

A little flour dusted on the work surface and we plomp the dough onto it. Now comes the hard work. Grab the closest side of the dough ball with your left hand then with the heel of your right hand, and putting your weight into it, push the dough away from you. Pull it back on top of the lump held by your left hand, give the dough a quarter turn and repeat. And repeat. And repeat. Get into a rhythm and let your mind wander. Alternatively listen to Radio 4, unless Sue Perkins is on yet again, in which case turn the radio off as fast as you can before, like her, you start confusing heavy-handed irony with wit. You may need to add some more flour to your board but be careful, halt as soon as the dough stops clinging to your fingers.

After what may seem like an eternity, but is only about five minutes, you will notice that when you let go with your right hand the dough starts to want to come back on its own, like elastic. This means the hard work is paying off; the gluten strands are tangling together to create the structure that will trap the gases of the yeast and cause the bread to rise. ‘Keep going until the dough feels quite hard,’ Gizzi says passing amongst us like a teacher checking class work, and when you poke it with your finger tip and the dough ‘heals’ – the dent fills out again, almost immediately – you’re done. 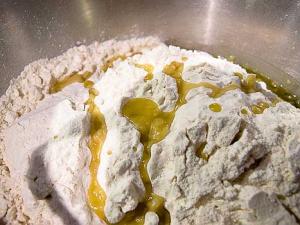 So now, says Gizzi, it’s time to prove. Shape the dough into a rough round ball, splash a bit of oil in a large bowl and tumble the ball around in it to lightly coat the surface. This stops the dough surface drying out. Stretch some cling film tightly over the bowl so that the dough can have a nice draft free, moist atmosphere to rise in, and then stick the lot in a warm place. The kitchen itself is fine. Then wait.

After an hour, if you have used a glass bowl, you will see the dough has risen to about twice its volume. Now comes the fun part, remover the plastic and sock the dough with your fist all the way down to the bowl’s bottom and feel it deflate around your hand. Gather the dough up and give it about 20 seconds kneading again.

The proof of the proving

Now using the heels of your hands shape the dough into a round or oval, letting your hands tuck the dough under itself so that the top becomes as smooth as that baby’s bottom we discussed earlier. Stick it onto an oiled baking sheet

Cut a few slashes into it, so it can expand a bit easier, cover it with loose, oiled cling film and leave it to rise for about 45 minutes. Light up your oven to 200C and, if you can remember, add a pan of water to the bottom to make the oven air all steamy.

Bring your lovely risen dough to the oven and slip the bread and tray into the oven and wander off. Soon the smell of baking bread will make you feel you are a real family provider and belong in one of those novels about high-flying media women who give it all up to go and live in their second home in Wiltshire. For about a year until they get bored, that is. 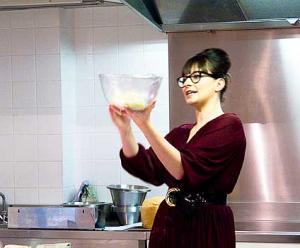 When the time’s up, get the loaf out, turn it upside down and tap. It should sound hollow like a bongo drum. It’s done so place it on a rack to cool.

And, top tip, if you want a soft crust cover the bread with a tea towel at this stage. Oh and don’t be tempted to cut a slice, it won’t be any good. The bread must be allowed to completely cool down.

You can also divide your dough into rolls plain or stuffed with Parma ham, herbs, feta or olives. The beauty of making your own bread is you can make it just how you want.

Gizzi generously complements us on our varying degrees of first time success before heading off to judge the new Channel 4 series Iron Chef. Well it may be hard for those contestants, but we with the aching arms feel pretty victorious too.