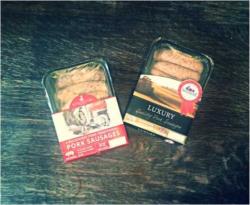 If food were simply nutrients the dinner table would be a very dull place. Thankfully, at least as far as I’m concerned, it is not. A meal can fuel conversation, rekindle friendships, start relationships, and so much more.

When I was younger I remember my dad would take me to a pub in a nearby village right next a huge cement factory. It was full of mismatched furniture, Victorian polyphones and other obscure treasures that had clearly been collected over a number of years. My dad would have a pint of Burton Bridge, I’d have a coke, and sometimes we’d have a pickled egg fished from its vinegary home by the jolly landlord, before being presented on a plate with some salt.

Now, many years later I am unable to eat a pickled egg without being mentally transported back to that pub; the antique furniture, the music machines, the grey faces of the cement factory workers propping up the bar.

With this in mind, I was particularly pleased to receive an email asking if I’d like to try a certain sausage the other day. For the last ten years, the 11th Earl De La Warr has apparently been searching for the recipe of one of his childhood food favourites Ã¢â‚¬â€œ a sausage with fond memories attached.

After finding out the butchers from which these special sausages were sourced had closed, William De La Warr set about tracking down the butcher himself, but after many meetings discovered he had sadly passed away taking the recipe with him.

Thankfully, William did not give up and instead locked himself away in the kitchen; experimenting, cooking, remembering, until one day he had his stroke of banger brilliance and produced the special sausage he remembered. 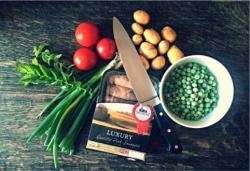 After teaming up with Speldhurt, a Sussex banger manufacturer, the Earl’s sausages are now available to everyone and I must admit are really pretty good. It may sound strange but the first thing I noticed when taking a bite was the meatiness. Yes, I know,’a meaty sausage’, a description about as ground breaking as not receiving an RSVP to your gay wedding from the Westboro Baptist Church. But it’s the most accurate word.

Admittedly, the test of any good sausage is bangers and mash but this has been no weather for that, and so I had them with crushed minted peas and roasted salsa potatoes.

For more information on the prestigious porkers visit this website, or carry on down for my summery sausage supper recipe. It’s not complicated or flashy but lets the sausages sing. 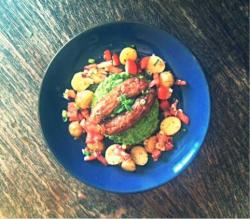 10. To plate up pile the minted peas in the middle of each plate and scatter the potatoes around them. Place the sausages on top of the peas and sprinkle over the spring onions set aside earlier to finish

The Buckhurst sausage can be bought from Waitrose priced at £3.00 for 400g or can be found on the menu at The Dorset Arms, a pub owned by Lord De La Warr. Other sausages in the range can be found at major food retailers priced from £2.50.

Rather someone else did the cooking? See how Nik got on at The Plantation, Poole