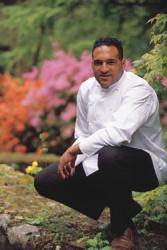 Foodepedia was recently lucky enough to interview Michael Caines ahead of the launch of his Fairy Liquid Pop Up at the OXO Tower. Caines is the executive chef of Gidleigh Park, a two Michelin star hotel in Devon as well as overseeing the restaurants for the Abode Hotel group.

What is the inspiration behind the pop up?

The inspiration is the launch of the two products, Fairy Platinum Tablets and Liquid. To celebrate that with this pop up we’ve launched the clean your own concept. So I will be cooking a two course meal, a main and a dessert. Unfortunately, you then have to help me with doing some of the washing up. The pop up is based on memories of my childhood as I used to have to do the cooking and the washing up.

Is this your first pop up in London?

It’s quite exclusive as I’ve never had a restaurant in London and it’s the first pop up concept that I’ve done. It’s going to be fun and engaging.

What sort of dishes will you be cooking at the pop up?

I’ve gone to the childhood memories, so inspired by shepherd’s pie, going to be doing a herb crusted saddle of lamb with smoked aubergine puree and a lovely jus of thyme and rosemary. Then we’ve got a vegetarian option, which I am still working on. We’re following this up with two of my favourite desserts. An apple plate consisting of apple crumble, an apple mousse, and a lovely green apple sorbet. We’ve contrasting that with a sticky toffee pudding with caramelised cream. That will certainly test the product.
P.R interjects ‘You need to get a dishwasher”.
You need to use your kids like me, I was the dishwasher at home. In the days of no dishwashers you just had kids.

Obviously your cooking as a restaurateur is very high end but what sort of stuff do you cook at home?

Well, clearly I have two children myself, I don’t want to bring home the Michelin star cooking. I want comfort food. I enjoy cooking simple things that also are a little bit different, so take the sausage meat and turn it into meatballs, cook it up with a lovely tomato sauce. Pasta is great fun and easy to do. That’s the thing at home; you are always governed by time.

Do your children get involved?

Yeah definitely, I always get the kids involved. Obviously you have to be careful, my son thinks he’s got skills, always doing rapid fire chopping. I’m like ‘mind your fingers” but he loves it, it’s good to engage. I find that if they are engaged with the food when they are making it, they are much more likely to eat it.

Do you have any tips or recipes for the upcoming autumn?

I love stews, and pot roasts. Confit or slow roast joints like lamb shoulder, just pop it in the oven and let it roast slowly over a few vegetables. You end up with something that flakes off the bone. I enjoy purees, mash potato with celeriac in it, something slightly different.

For those who might not know that much about you how would you describe your style of cooking?

Pretty honest but quite classical in some ways. I like to focus on the quality of the ingredients and then accentuate that with other flavours around it. I have a very simple approach when it comes to cooking and presenting it, but when it comes to the technique it’s very intricate.

I don’t want to bore people with too much detail with how you get there, but I also don’t want to get the reputation of being too simple. When people wax lyrical about science and cooking as a real science I think it’s great, but for the humble person that’s a level of detail that’s going to turn them off.

How important do you think it is to eat as a family?

I think it’s hugely important to sit down at the table. The table for me is a religious and social symbol, and getting around that table for a small amount of time, gives you a time to engage and show interest in each other. I don’t think we do it enough.

The other thing is once you’ve enjoyed the meal you have the washing up. Everybody gets up and shares the washing up and it can be fun. Mundane things bring out conversation, you’re sharing things around the table. Get people engaged and the washing up becomes fun.

Finally, what are your future plans?

My immediate future is concentrating on the pop up. Beyond that, Christmas is coming up which is always very busy and about acquire a few more hotels, which is exciting. In this industry you are only as good as your last meal, so in between these projects it’s all about making sure you continue to innovate and maintain that quality. I think about how I can get out and inspire myself and the types of things I will be cooking in the future, whilst also fitting my family life around that. Looking forward to Christmas, but very aware that with a busy life I need family time,

Your life can just whizz by and it’s key to have a routine. Without that suddenly two weeks can have gone past. Sunday is always a good reference point and that’s why it’s important to have that social engagement with food. It breaks the week up and I look forward to that.

Micheal Caines will be cooking at his Pop Pp in the OXO Tower on the 18th and 19th of November.
It’s only open to completion winners and you can enter at www.facebook.com/fairydish.