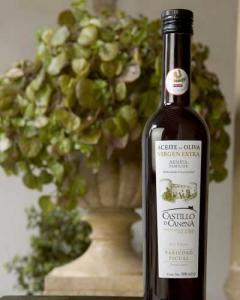 Deep in the bowels of an anonymous office on Wigmore Street, Rosa Vano from Castillo de Canena is setting out tasting cups for the olive oils she has bought from the family estate.

These are no ordinary oils destined for the bulk purchase market, because as Rosa explains, the total production of olive oil from her estate is but a tiny drop in the olive oil ocean worldwide. Instead these are fine gourmet oils, to be used as an ingredient in cooking not simply as a means to an end.

The estate, centered around an ancient castle, which is the family home in the La Loma region, is very very old. The castle itself dates back to the time of the Arabs and the need for fortifications against attack. The whole growing and oil production process has been meticulously controlled here since 1780 using three main varieties of olives – Picual, Arbequino and Royal – and tradition has been carefully blended with modern expertise to create multi-award winning oils.

The growing hectares are mechanically watered using an irrigation drip system and is as green as can be with electric power coming from solar panels and pruning waste taken for biomass. The olives are harvested mechanically by shaking the tree, not raking the branches as is done for example in Italy, and the olives are taken to the press no longer than three hours after harvest.

The pressing machinery, as Rosa says, is not the romantic great stone wheels we see in tourist pictures. These she says do not do an efficient job and each pressing after the first is adulterated. Here modern cold presses do the work before the oil is transferred to stainless steel vats where it is kept under an inert gas. The same gas is injected into filled bottles to ensure as long a shelf life as possible.

As she pours some Picual and Arbequino oil the emerald green colour is striking. With the Picuals on the nose and on the palate you can pick up the same odour you get from a tomato plant’s leaves as well as hints of rocket and rosemary. The Arbequino is more rounded with a semi-golden colour.

These are definitely unique oils and the Rosa has clever ideas to take olive oil to the next foodie level with very special oils such as the First Day of Harvest range. This is exactly what it says – the flavours and freshness captured at their very optimum and placed in distinctive red glass bottles decorated with designs by Spanish Soprano Ainhoa Arteta.

First Early Royal is another special oil from the sought after Royal olive variety. Difficult to harvest and low in yield it was almost on the brink of extinction until Rosa’s family found some growing in the mountains and brought it back to the table. Only 7,900 bottles were made last year, making this a very special oil indeed.

And perhaps most exciting of all is the Horizontal Tasting collection. The same varietal, Arbequino, is harvested over three consecutive months – October, November and December – and each is individually bottled. Clear bottles are used so that buyers of the boxed set can appreciate the varying colours and an anti-UV varnish coats the bottles so that the oil does not suffer the effects of sunlight. Inside the box is a booklet explaining all and suggested dishes to use the oils with for each month – a starter, a main and a dessert.

Castillo de Canena First Day of Harvest is available in Waitrose from £15.99 and also from www.kingsfinefood.co.uk who also stock many of the other oils.

Fabulous recipes to make the most of these amazing oils