Babur in South London is about to enter its 25th year and to mark the sterling occasion, the restaurant has commissioned two new art works from South London women artists. From Kate Pritchard they’ve commissioned a ceramic-based piece representing all the ingredients used in our cooking. And from Durga Devi Talukdar a very large scroll painting illustrating scenes from the life of Babur, the first Mughal Emperor of India.

The dishes composing Babur’s 25th anniversary tasting menu features at least 25 flavours, drawn from some of the restaurant’s most popular dishes. 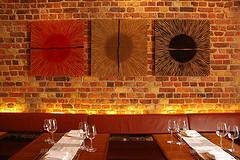