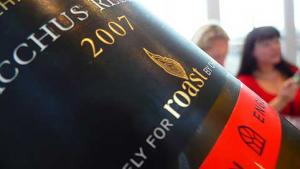 There is, as the adage goes, no such thing as a free lunch. Owing to the intensity and expectation of organisers, I found a recent meal at Borough Market’s British restaurant, ‘Roast’ occasionally hard to digest.

Invited by England’s largest wine producer, ‘Chapel Down’, who are based in picture postcard, Tenterden, Kent, seven professionally-inclined foodie carrier pigeons were sat strategically. Between us, three reps from the winery, two PRs (there would have been a third if she hadn’t been afflicted by vegetarianism) and the restaurant’s owner came armed with dossiers describing us. If you include cameos by chef, the ratio of clients to writers equated to an envoy each.

We were encouraged to comment as we masticated via the pervasive, but not unpleasurable, expression of the inner monologue, ‘Twitter’. You can find our thoughts here.

However before morsels entered mouths, it became apparent that our preferred wine and food combinations would be bound into a ‘diner offer’ to trail on our sites. Rather than reasoned, seasoned, editorial comment, such a request for ostensibly free advertising felt presumptious.*

Regardless, a man must eat! Advised almost maternally ‘not to fill-up on bread’, we set to work on five courses matched with nine wines and a Porter. The best dish was satisfyingly crunchy-skinned Essex pig belly in bramley sauce with a silky potato pile which looked like Chet from ‘Weird Science’ in excremental state. This sung with Bacchus Reserve ’07 which added hedgerow scents, fresh acidity, and a soft, long-lived texture. Second best was spiced clementine custard with feintly anise-scented shortbread-like biscuits matched with late-harvested, Nectar ’07. Citrus mirrored citrus. 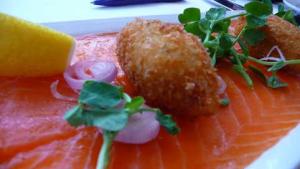 Regardless of what others thought, I found the Tenterden estate Pinot Noir ’08 a skilful endeavour at English red – 90p/c of English wines are white. Cocoa-scented, complex and pleasantly persistent with a velvet texture, it was, alas, swamped by the lethargic chocolate sauce of chestnut and conference pear cake.

Despite a tart, slightly frisky Rondo, Regent and Pinot Noir combined from various years – Californians might label it ‘an earthquake cuvee’, as if blended thoughtlessly to save toppling vats – the efforts of world music label founder turned winemaker, Owen Elias, who changed careers because the rock ‘n’ roll lifestyle would ‘have killed him otherwise’, seemed successful.

However the drink of the day involved only a dash of grapes – Black Velvet built with sherbet scented Vintage Reserve Brut and Elias’ fragrant, lifted, Admiral Porter. A striking collaborator with a kind of haggis burger embellished with celeriac and oxtail sauce.

Despite the constant narrative about Chapel Down piped around the table, it had been an enjoyable lunch. After no fewer than nine glasses, I even began to interpret the PRs persistence as pride (possibly).

Roast, incidentally, is a beautiful restaurant, arguably serving London’s best breakfast to up to 270 a morning. Originally at Covent Garden, the shimmering portico was bought by Borough’s trustees for £1. In an exotic gesture to the market’s history of fruit and veg, architects, Grieg & Stephenson most recently added artichokes to the roof.

On arrival, a glass of Chapel Down Brut Rose

Ramsey of Carluke haggis with celeriac and oxtail sauce, with a glass of Chapel Down Rondo Regent Pinot Noir NV

Spiced clementine custard with anise biscuits, served with a glass of Chapel Down Nectar 2007

Chapel Down have offered the Pinot Reserve 2004 for £99 for a case of six including delivery to any UK mainland address (normally £150 plus delivery). Phone the vineyard on 01580 763033, ask for Lizzie or Wendy and quote ‘Blogger Offer.’