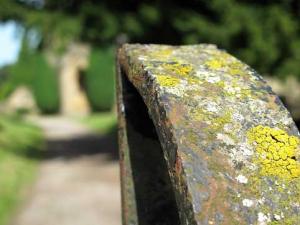 Part two of our Peak District visit finds us checking out the glories of Chatsworth, and rifling through the Duke’s rooms, gardens and restaurant.

As day dawns at the Peacock at Rowsley, last night’s delicious dinner is a memory and the thought of breakfast dominates. A hotelier once told me that no matter how fantastic the hotel, no matter how great the evening meal, if guests didn’t get a good breakfast that would wipe everything else out. If it wasn’t perfect they would leave grumpy.

Of course these days it’s obligatory to lay on a breakfast that contains a lot of terrible things like muesli and fresh fruit. In many places it’s also obligatory to make guests serve themselves everything. Well, the Peacock has a spread of quality yoghurts, fruit juices and other healthy options, which you can gather for yourself, but when it comes to the hot breakfast there is a menu and table service, which is just what I like. All I want is to be allowed to read my crisp, fresh paper in peace occasionally assenting to more coffee in between bites of proper, water-free bacon and bangers that are packed with premium pork. That sunshine is cheerfully bouncing in through the garden doors and off the silverware is an added bonus. 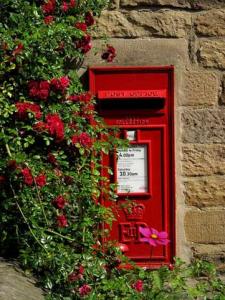 With that full English inside us the English countryside beckoned. From the White Peaks to the Dark Peaks, the narrow roads here wind, climb and descend in ways that makes the area a Mecca for motorbike lovers. Indeed signs everywhere warn drivers to watch out for bikers and to remind the bikers themselves that each year a few more of their number come to grief through excess speed or simply disrespect for the roads’ twists and turns. Every bend reveals a new vista of land humped and peaked like a duvet after a restless night. The marks of humans are light and you feel could be easily erased by nature if we were all to disappear.

All this means that you often want to stop to take in and photograph yet another fabulous view, but in a car you can’t do that or you’ll be hooted to death by those behind. Best to use the special spots designed for the purpose. Even better take the bus, because not only will you be doing the environment a favour the view’s better. Even a single decker bus gives you a seat higher than the stone walls and you can concentrate on the sights, not the steering. The local bus company has done well to provide services that are reasonably frequent and which go where you want to go.

And of course the walking is wonderful and it’s easy to leave the car in a recommended spot and take a circular route back to it. Miles of walks are clearly signposted for the averagely abled pedestrian, some cleverly using old railway tracks, whilst serious strutters can find challenging hikes to push them that bit farther. Car bound on this brief visit though, we headed for Chatsworth, just twenty minutes away, for some good old fashioned British nosing about in someone else’s house. 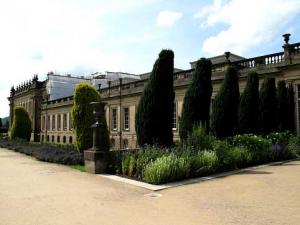 As you come around the bend on the public Baslow to Rowsley road that passes in front of the estate, it’s actually hard to steer your car, so transfixing is the suddenly revealed view- as was intended of course. The yellow stone house sits perfectly in a hollow of land and the river Derwent in front, the massed trees and hills behind and the single jet fountain that spouts water high into the skies and is powered only by gravity, make a remarkable vista. Arrive early enough, before the crowds build, and you can imagine just as it was before opening to the public – a statement of wealth, taste and personal power.

The Duke of Devonshire certainly has a nice place. Chatsworth has to be one of England’s most beautiful stately homes. Conceived and created by Sir William Cavendish and his third wife Bess of Hardwick in the mid 16th Century it is of course a long way from Devon. The title comes from the fact that a grateful King – grateful that William Cavendish had been helpful in the dissolution of the monasteries and in generally waving a sword about – wanted to stump up a suitably rewarding title and Devonshire was available. 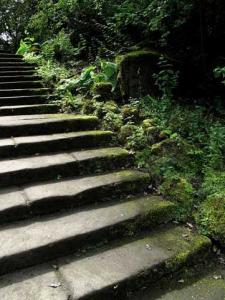 Many years ago a village was deemed to be spoiling the view from the house and was moved, brick by brick, to be out of sight. That village now is inhabited only by estate employees and is worth a visit all on its own. If anyone at the time minded having their house relocated, they must have been mollified by having such a nice new home to go to. It’s not as if they were all packed off to a sink estate after all, in fact this village is so picture perfect it’s a wonder the BBC period production (corsets and crinoline) department don’t just move in permanently.

Chatsworth itself is of course no stranger to crowds of unionised men ambling around dragging cables and eating their specified allowances of doughnuts each day. Chatsworth House appeared in the 2005 film adaptation of Jane Austen’s Pride and Prejudice representing Darcy’s Pemberley and the house was also used in The Duchess (featuring Keira Knightley). Chatsworth will soon be seen in The Wolfman as well. In fact the house has a section devoted to stills pictures and souvenirs of these films and perhaps most remarkable are the pictures of how the house was made to look wintery, destroyed and ravaged for The Wolfman. Very creepy shots they are too, totally at odds with the sun kissed scene I can see in front of me as I peer out of an upstairs bedroom window and pretend that all I can see is mine, all mine. 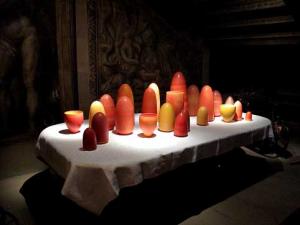 Enlarged, adapted, extended and occasionally mucked up, Chatsworth has marks of previous Dukes all over it. Today’s Duke, the12th, has a passion for modern ceramic sculpture and his purchases crop up all over the house. The guides seem ambivalent about these artifacts, their feudal respect perhaps extending to not criticising the master’s taste, but it seems to me the Duke has an excellent eye and an understanding of how the house must continue to be a living, breathing entity not a mothballed relic. Even so it’s hard to believe that during WW2 it was used as a girls’ school, but old pictures show Enid Blyton-ish scenes of grand bedrooms, still with their ornate furniture, used as dormitories and class rooms. 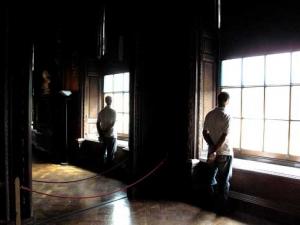 After touring the house, most of which is open despite ongoing restoration and the family’s reserved private areas, and seeing the rooms where characters as diverse as Mary Queen of Scots and Lucien Freud have stayed, the former somewhat unwillingly, the gardens are next. Fabulous examples of the landscaper’s art, including one Capability Brown, they include the magnificent cascade built in 1694 and extend in all directions from the formal lawns to the rather wild and superb rocky levels behind the house.

The great iron framed greenhouse never survived the war, coal to heat it being too expensive. So in typically practical aristocratic fashion it was blown up by the army as a favour. Unfortunately at first not enough explosive was used, so rather like a Top Gear Challenge, they tried again but with a whole lot more. The greenhouse certainly went up satisfactorily that time, but lumps of iron then rained down all over the main house some distance away and smashed roof tiles and windows.

You can spend an age wandering around the house and gardens. It’s all been done very well with a nice balance between the needs of the visitor, the family and the house itself. And you can get a decent lunch in the old stables too as we found out before beetling off to take in the Bakewell festival.