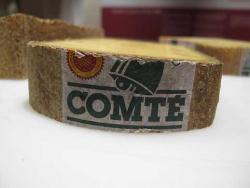 The fine drizzle descending on the meadows of the Comté region of North East France this late October day will soon turn to thick snow. Then this landscape of vibrant green and birthplace of Raymond Blanc, will again assume its winter mantle of white.

The Montbeliarde cows won’t mind. They’ll be exchanging this rich pasture for cosy barns and meals of summer-stored hay. Every day, twice a day, they’ll still be milked to make Comte cheese though. 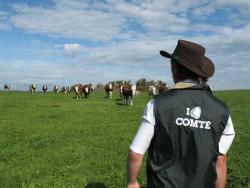 Instantly recognisable as a semi-hard cheese, Comte is versatile – served as cubes it makes pre-dinner nibbles, added to cooked dishes it melts well and in France no cheeseboard is complete without at least one example of Comte on offer. It’s sensual too, the French like to break their Comté and savour the aromas, while its nutty creamy flavour varies between summer and winter-made Comtes, the amount of ageing and its terroir. 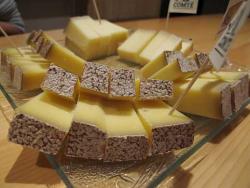 Comté is the biggest AOC cheese in France, literally, as each 70cm wheel of Comte can weigh up to 50kg. Governed by tight rules that specify the breed of cow, the amount and type of pasture each must have to graze in, the maximum distances between milking shed, dairy and ‘affinateur’, where the finished cheese is matured, it’s a cheese of strong tradition. A best- seller all over France, its presence in the UK is still small. 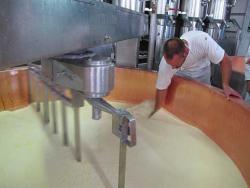 ‘This will all change’, says the man from the Comté Comite, screwing himself around in his driving seat to face me and blithely ignoring oncoming lorries abruptly appearing from around the Alpine bends. He is taking me from farm to cheese knife to help a ‘rosbif’ appreciate the true beauty of Comte. 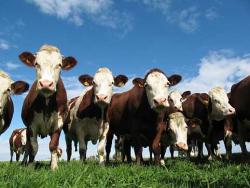 We first go to meet the Montbeliarde cows at a small farm run by their loving owner. Brown and white and remarkably friendly, they graze in high meadows containing not just fine grass but also up to 56 aromatic wild plants and flowers, apparently one of the secrets of Comté’s unique and complex flavour variations. The AOC rules require that each cow has access to two acres of this land to graze in and no fermented feed is allowed. 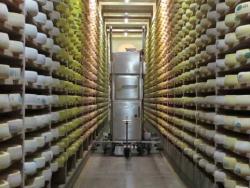 The milk travels twice a day to a small local dairy, which ensures that each cheese is always unique to its terroir. Ageing takes place in co-op controlled massive ‘caves’ where the cheeses are racked on traditional boards made from local spruce pine.

The rough grain of the wood helps the cheese breathe and creates Comte’s unique rind and each day the cheese is washed with a saline solution and turned over. ‘It used to be done by hand, ‘says the head ‘affinateur’, ‘but it really did your back in. Nowadays we use robots.’ Ahead of us, bleeping quietly to itself, one is trundling down the line, regularly reaching up to the heavy cheeses that are shelved up to the heavens. ‘They don’t get bored,’ he adds eyeing it warily, ‘but they do break down a bit.’ 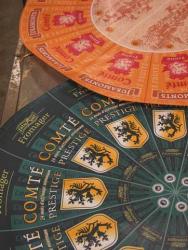 He inserts his testing ‘sonde’ into a nearby wheel. The cheeses pass through his rooms in gradated temperatures, cool, warm, then cold for no less than 4 and up to 18 months to encourage the microflora in the cheese to do their work. He checks for taste and aroma and hammers on the rinds to hear how each cheese is forming inside.

He will eventually grade the cheeses based on flavour, texture, shape and rind. 15 or more points out of 20 earns the Comté Extra green label, 12 to14 out of 20 is Comté brown label and under 12 they don’t pass muster at all and end up grated for general cooking. 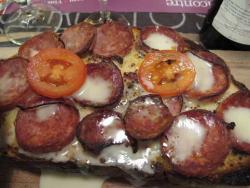 saucisson and tomatoes. The Jura wine, a bio-dynamic Chardonnay, from a local winemaker, is tart and crisp and outside the temperature is falling sharply. Time rolls slowly here but soon dawn will break and it’ll be time once again to make some more wheels of Comté.

By Foodepedia1 May 2012Articles