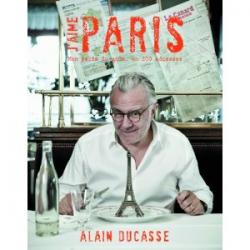 A hefty tome this, as befits one written by one of the big beasts of cooking.

Alain Ducasse is the only chef to hold 19 Michelin stars throughout his career and perhaps the only chef to ever take Monegasque (Monaco) nationality in order to lower his tax bills. Quite how many restaurants he now owns worldwide is hard to tell, but those millions keep rolling in to his bank account.

It’s is therefore rather hard to imagine that Ducasse really does what this book suggests; stroll around Paris popping into chic little restaurants, suppliers and cook shops like a superannuated version of the over made-up, over creative-directed, young girl currently showing us her ‘little Paris kitchen’ on TV.

However he does appear in a lot of the pictures, so unless these have been heavily Photoshopped one has to believe this is genuine, or at least as genuine as that little Paris kitchen is.

And there are a lot of photographs; they outweigh the copy by about 9:1. They’re good photographs for the most part, although nothing most of us couldn’t get with £5000 worth of dSLR and digital’s ability to take hundreds of pictures to choose from. ‘There’ll be a good one in there somewhere Alain. trustez-moi!’

Alan wanders cheerfully around town, with possibly his wife who is dripping couture and jewellery, popping into all kinds of restaurants and suppliers and delivering quick bursts of info, enough to whet our appetite but not slake it. He writes in the active present tense, ‘Michel thinly slices’, always a warning sign but then no one said a great chef should also be a great writer.

The main thing is that you can just turn the pages and be very envious of Parisians. You’d need Alain’s income to eat at some of these places, the photos reveal menus with starters at E24 and that’s in some corner spot, not a Michelin starred restaurant, but it’s clear you’d never run out of new places to try.

Over 200 culinary destinations, enough to fill anyone’s Eurostar weekend break and each clearly delicious. Obviously you couldn’t take this book with you, it would break your baggage allowance and your back, but here’s the rather clever bit.

Concealed within special editions the back cover has a small booklet containing the names and addresses of each place along with small descriptions. Armed with this you can create your own Paris itinerary and easily follow in the footsteps of Monaco’s greatest chef. It’s a good idea, the book is sumptuous and it’s not a bad read at all.

I am almost ready to forgive Ducasse for perhaps the most expensive and dull tasting menu I have ever eaten (Ducasse Dorchester, London 2009). Clearly his mind, and his heart, were elsewhere. And who can blame him?