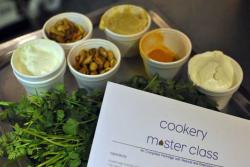 Indian food may be as quintessentially British as fish and chips, but as I recently discovered there is far more to this vast and exciting cuisine than the uninspired tikka masalas, kormas and vindaloos most of us rarely stray too far from at our local curry houses. With its rich variety of differing regional styles, each corner of India has something unique and unusual to offer. Vivek Singh who runs the Cinnamon Club and Kitchen, understands this as well as anyone. With his team of chefs originating from all over India, each brings their own regional cooking styles and characteristics to the menu and the result is a unique amalgamation of Indian cuisine.

Luckily for curry enthusiasts like myself, Singh hosts a selection of specialist masterclasses throughout the year. Each course is devoted to a specific aspect of Indian cooking, ranging from seafood to classic curries to Indian-inspired cocktails. The latest addition to the line-up focuses purely on game and I’ve signed up to learn from the master.

The classes take place at both of Singhs London restaurants, today we’re at Cinnamon Kitchen, the more ‘informal’ of the two. The day begins with an introduction from Singh, followed by a brief overview of what we’ll be getting up to throughout the day. Flanking him during the proceedings are his two most experienced and highly regarded chefs, Abdul Yaseen and Rakesh Ravindran Nair. We are told that generally it is only two of the three chefs that take the classes, but today we have somehow ended up with the full trio. 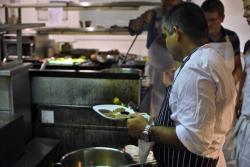 With the formalities over, we are all herded enthusiastically towards the kitchen, where we stop briefly en-route for a short but entertaining presentation about spices and the enormously significant role that they play in Indian cuisine. We meet and sample the sixteen most commonly used spices and also learn a bit about their origins, plus we get some useful cooking and medicinal tips.

In the kitchen we are split into three groups and each batch of willing amateur cooks is assigned a head chef for the day. The structure here is less formulaic than the typical cookery course. Instead of us all mirroring someone up at the front of the room, we are all given a specific job and the result is an experience that feels more akin to what I would expect it to be like in a professional kitchen.

My task is skinning and filleting twenty partridges. Before I was let loose on the dainty, little birds I was given a military-style demonstration carried out with strict precision and ruthless efficiency by Rakesh Ravindran Nair. He made the whole procedure look effortless; it wasn’t. Thankfully by the twentieth attempt, my technique was approaching the realms of what I was aiming for. It might have taken me 5 times longer than chef Nair to complete each bird, but I was smugly pleased with what I had achieved. 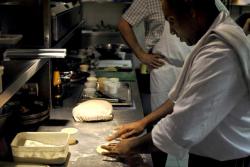 My favourite aspect of the day though was the freedom we were all given to explore the kitchen throughout the morning. Nosily soaking up everything that was happening, it served as an excellent way to wander around collecting an abundance of useful skills and tips. It was also a great opportunity to speak to the chefs in their natural environment and learn a bit more about life in the kitchen.

Once we had all finished honing our skills and mastering our particular tasks, we came together to assemble the separate parts of each dish and plate the food up ready for a masterchef-style inspection. 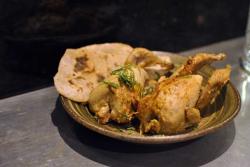 The meal that ensued was probably one of the best I’ve ever had. Standout dishes included roast saddle of venison with stir-fried beetroot, a rabbit and sweetcorn curry and my very own herb and spice infused partridge with a spicy, marinated pear and a nut sauce. It was an eye opening experience and really got us asking the question, why doesn’t game feature more prominently on Indian menus? Its rich meaty flavours seem like the perfect complement to all those spices.

As we all left the restaurant weighed down by the gargantuan meal and heavily laden with a fully loaded gift bag, everyone appeared to be wholeheartedly satisfied.

At £175 it is certainly more expensive than the typical cookery courses, but taking into account the level of teaching given, the quality of the ingredients used and the openness of the chefs, we were all in agreement that we had got value for money. Perfect for anyone who is a lover of Indian food, or who is interested in food in general, it’s a great way to spend a day and you’ll leave fully armed with enough tips and skills to keep you going until you can decide which masterclass to sign up for next.

For full information on upcoming classes click here or for any other enquiries email: info@cinnamon-kitchen.com