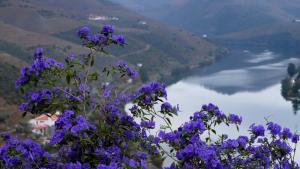 ‘Is that a calendar?’ enquired scribe and sommelier, Emily O’Hare when I mentioned the ‘Douro Boys’ phenomenon. Actually, no, I replied when I’d eventually stopped laughing – although I’ve little doubt that such an idea would succeed. It is in fact an alliance of five of the leading Douro quintas who also produce unfortified wines: Crasto, Niepoort, Vallado, Vale de Meao and Vale Dona Maria. Although I’d visited all but the last one a year ago, I was keen to return to one of the most inspiring success stories: Quinta do Crasto.

Rather than rattling on the back of a trailer as last year, I much preferred arriving at Crasto in Miguel Roquette’s luxurious shiny jeep, which is so technologically advanced that the Sat Nav’s sky corresponds with the actual weather. Deftly gliding past dogs and goats along the vertiginous road overlooking the broad, calm, misty Douro, Roquette paused to gesture to an unprepossessing precipice. ‘Up there,’ he said, pointing past the Irish setter red bark of a just harvested cork, ‘is where phylloxera came to the Douro’ he said with anguish of the arrivals point of the devastating 19th century grapevine devastator. But his positive demeanour soo 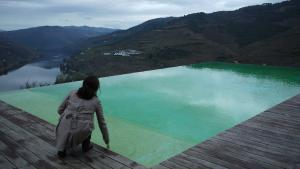 n returned. ‘This road slopes slightly all the way to the Quinta,’ he said. ‘You can skateboard there in 20 minutes.’ Knowing that one false move could spell certain death, I politely declined and reclined ever deeper into the Port mobile’s expensively aromatic leather seat.

Surfer, mountaineer, fish expert, linguist, deft impressionist and wannabe African park ranger, there is much to be said of Roquette before considering his role as head of sales and marketing (his shier brother Tomás manages its daily running). The same could be said of the winery’s majestic location, perched high on a volcanic summit equidistant from Pinhão and Régua in the Cima Corgo. Crasto comes from Castrum, Latin for defensive point and this vantage, jutting the river, once saw service as a Roman lookout. These days a more frolicking version of the view may be taken from an infinity pool – legendary in the wine trade – which se 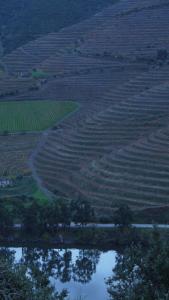 emingly pours, sheerly, straight into the metallic sheen of the Douro. According to Roquette, Rolling Stone rocker, Ronnie Wood spent a summer’s day poolside with an exotic squeeze. On departure, he was heard to remark: ‘I’ll bring Mick next time’. Then there are the olive trees whose ripe fruit is harvested by gravity in nets woven around trunks.

But wine is what the 17th century estate is rightly best-known for. This is made by resident winemaker, Manuel ‘the wolf’ Lobo and hygiene obsessed, flying Australian winemaker, Dominic Morris who cares so deeply about his vocation that he even ‘says goodnight’ to each vat according to Roquette, who himself occasionally sleeps in the air conditioned tank room on still, searing nights.

After checking into the estate’s luxurious guest bungalow, it was time for a twilight stroll. At the steep vineyards reaching towards the summit, Roquette pulled at a schist bank, demonstrating, teacher like, how hard but brittle his beloved terroir is – perfect to exercise vines which must burrow for water while dredging minerality which ultimately unravels in the glass. Indeed, stronger seams are fashioned like daggers to form what I discovered are mightily heavy trellis posts. Crasto is incidentally, the first producer to have encouraged vertical rows to ascend the Douro, ensuring greater yield from the same spread of land. But pity the harvesters who lose their footing…

As well as this estate, which comprises 48ha under vine, there is the recently acquired 120ha of Quinta da Cabreira in the Upper Douro, where, with the support of Taylor’s Port, land has been detonated by dynamite to accept sappy vines, as well as various outcrops for prized, but minority white wine. 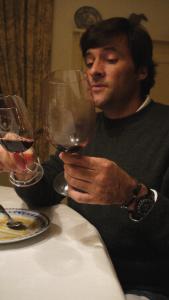 Surprisingly given Roquette’s vehement assertion that Portugal has the very best seafood in the world, our dinner was turf not surf. With big boned, free range chicken, garden tomatoes and marinated new potatoes, we sampled the sadly sold out ’08 Douro red, which was very fruit driven compared to the same style, served blind, from 10 years before. Still juicy, it had developed subtle hints of incense, orange and gunpowder. Named after the schist soil, ’06 XISTO, a partnership between the Roquette family and Jean-Michel Cazes, owner of pedigree Châteaux including Lynch-Bages, proved alert and luxurious, with long-lived allusions to lush milk chocolate, double cream and vanilla.

One of Crasto’s two single vineyard wines, Vinha Maria Teresa was the highlight. A field blend of 20 types of 100 year-old vines including one with a jauntily striped skin, it was similarly oak driven to the XISTO at this stage, delivering a seamless churn of butterscotch, chocolate milk and ripe sultana within its sinuous texture. Glimpsing the same site in times past, the ’98 offered increasingly serious depth, encompassing teak oil notes and blackcurrant jam. Roquette mentioned that this wine achieved the highest rating for any unfortified Portuguese, according to Mark Squires, territory taster of über critic, Robert Parker jnr. Explaining their richness of colour, it was interesting to learn that many of these wines are still foot-trodden in the estate’s epoxy lined granite lagares, where purple legged people cling to eachother’s shoulders as much for physical support as camaraderie. 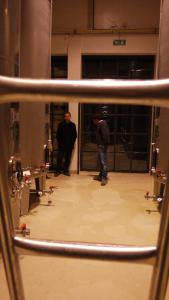 Summoned by a bell which Roquette let me ring, the low cook brought in her speciality dessert. Unfortunately, the title of this sweetened milk concoction not only translates as ‘camel drool’ but aesthetically approximates it. Much better was the spoonable yet savoury, granular sheep’s cheese, ‘quijo da serra’, which we finished with Port. Roquette is a fanatic of the affordable Late Bottle Vintage expression, and his ’94, bottled unfiltered after four years in softening wood, coated the glass like potassium permanganate while demonstrating true vintage mettle.

As well as increased cellar storage, and the massive investment that is Cabreira, Roquette intends to launch visitor facilities at Crasto, including a fine dining restaurant and grassy hospitality platform above the barrel cellar. While not interested in becoming an hotelier, Roquette has sponsored two vinously themed rooms in Porto’s wine hotel, the Yeatman. This is not far from the 615m wide Arrábida bridge, arch of which he illegally scaled in his youth.

The following day, Miss O’Hare emerged bright eyed and pink faced having – to my surprise given the season – managed several laps in Crasto’s unheated pool. Meanwhile, I managed two triangles of another of Roquette’s cook’s brave culinary experiments – just baked, heart stoppingly rich chocolate cake. Although an odd choice for an early breakfast, taken by the fire, I found myself wondering which of Crasto’s Ports might best accompany it…