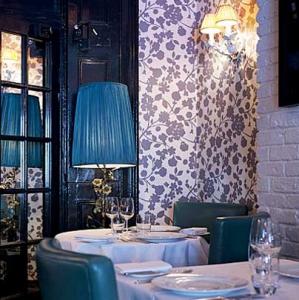 Primrose Hill sounds so lovely. The name conjures up soft focus images of small children racing across a verdant sward towards good-looking mummies and daddies, their arms outstretched, waiting to gather them lovingly up.

Stepping out of Chalk Farm tube station it isn’t quite like that, it’s more kebab alley than camomile lawn, but crossing over a bridge that isn’t marked on any map (how Harry Potterish) you land on an island where England is mostly a monoculture and there is indeed honey still for tea.

The parade of shops sell ‘nice things’ to people with not a lot else to do during the day, although rather bizarrely there is also a bookies. Presumably they’re all in there having a flutter on the Man Booker prize and not the 3:30 at Chepstow. ‘That Howard Jacobson loves it when the going gets rough, needs a taste of the whip though’.

Odette’s has been here quite a while, since 1978 in fact, which is a long time by today’s benchmarks. It’s achieved this feat by keeping up high standards, although there was a period before Bryn Williams took over in 2006 when it got a local reputation for being over priced and stuffy. Which is rather ironic when you look at the locals.

It’s not overpriced anymore, set lunch is around £20 for three courses and that has to be a bargain if the cooking’s up to snuff, and with Williams in charge there’s no reason to suppose it won’t be. Bryn has a great CV of working with chefs I rate highly, particularly Chris Galvin.

It seems rather small when you walk in but there is more space at the back and downstairs too. Up front is where you want to be though as its cosy and welcoming and busy. It’s possibly a bit too cosy for the number of staff employed, although no doubt it works better when all the rooms are functioning at capacity. At lunch the staff seem to be everywhere, but they are all smart and charming so no complaints there.

No complaints about the short but sweet du jour lunch and early dinner menu either, which changes every two weeks. Game terrine, fruit chutney, radish and toast sounds a bit dull, but wasn’t. The terrine was as rustic as incest and as chunky as a well-loved sweater. The chutney was tart and the radish; well it was a radish basically, but none the worse for that. Special shout out to the bread; made in house it was superb, especially the one made with molasses. The recipe will be in Bryn’s soon to be published book.

Soup never thrills but it does fill and with the temperature outside close to freezing it hit L’s spot. Butternut and Parmesan, simple but effective and dying to be mopped up with more of that gorgeous bread. L wiped her bowl clean.

We’re still in game season so for L Roast pheasant, fondant potato, sprouts, bacon and bread sauce was on the cards. The bird had proper crispy skin packed with flavour and the fondant spud lapped up the juices like a sponge. Poor old sprouts, butt of so many jokes, showed again that all they need is some love and care to come into their own as a valuable vegetable at this time of year.

My rabbit lasagne was so precisely brick shaped it could have come from a mould. Nothing wrong with that, it means Bryn got the sauce thickness just right as well as the ratio of pasta to meat. It was a mildly gamey ragu with the unique tones of rabbit making it rather special and with sweet carrot and smoky bacon adding familiar notes.

Welsh Brie for pudding, if that’s not an oxymoron. Perfectly pleasant but the accent is all wrong. More Goldie Looking Chain than Serge Gainsbourg at the end of the day. To be honest I think it needed more ripening too.

Baked passion fruit cream with mango and coconut ice cream did for L and we were ready to hit the street again. Well actually we went to the pub over the road and stayed until it got dark, with L pointing out local elderly arty ladies wandering unsteadily down the street. ‘You can always spot them because they can never put their lipstick on straight,’ she explained.

Odette’s may be getting on a bit itself, but there is no doubt that Bryn Williams has his lipstick on straight. The dishes are uncomplicated, cleanly presented, and with real depth of flavour. The lunch menu is a bargain and the blessedly short a la carte has plenty that you want to eat at any time of day.

Sometimes I almost wished I lived on Primrose Hill instead of Brixton Hill. But only sometimes.