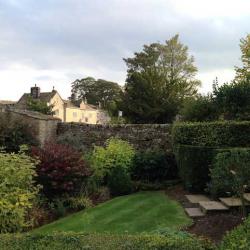 The insular nature of many Londoners still surprises me. To these people, London is the absolute capital of the country. The beating heart of politics, economics and culture, ring-fenced by the M25, beyond which the map is blank, and for good reason Ã¢â‚¬â€œ there’s nothing there. It’s a view I don’t share, as it just isn’t true.

The rest of the country is different to London, but then London is hardly a homogenous mass. Ask those same Londoners to go to the opposite corner of the tube map, or even a neighbouring borough, and they’ll react as if a voyage to Mordor has been proposed. The rest of the country has its own beauty, its own interests and even its own restaurants – places where they know how to cook more than just pie, mash and Yorkshire pudding.

As the train thunders north from Kings Cross, the irrational fears of Londoners do seem justified. A series of never-ending tunnels wipes the signal from your phone. Twitter, Facebook, Instagram, Whatsapp, all inaccessible. Even emails can’t be sent or received. It’s the dark-ages of the 1990s all over-again. The guard will stamp your ticket with ink and the only way to tell someone you arrived safely will be by fax. Next stop, Peterborough, where they’re probably constructing a wicker man.

Two hours further from London, the internet signal hasn’t returned, but the rolling countryside is often spectacular and far better to look at than the view from Hammersmith to Paddington. The train soon sweeps into Leeds; a sprawl of 1960s concrete, mixed with a 19th century past and peppered with a handful of modern tower blocks built before the last bust.

There’s no time for a coffee, The Skipton Train Ã¢â‚¬â€œ that’s what it’s actually called Ã¢â‚¬â€œ leaves in eight minute, rattling its almost empty carriages along a goat track, cutting through the hills and identical grey stone towns of north Yorkshire. At each station, the large face of the manager stares out from a billboard, across the rooftops and groups of bored-looking, tracksuit-wearing kids to the beauty of the hills beyond. 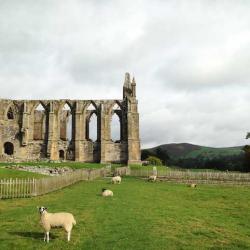 On arrival in Skipton, it was sunny: that stereotypical fine northern rain, that soaks you through, replaced by the vivid shades of lush green grass basking in the afternoon rays. Internet signal was still non-existent, but the tranquillity of the hills is best not disturbed by seemingly trivial emails about upcoming restaurant launches and the constant stream of baby pictures from friends. Oh well, the important stuff (namely, what I ate for breakfast, lunch and dinner) will have to wait until I return. Everyone likes a food photo, don’t they?

Leaving the train and tackling the last five miles by car, the winding roads diminish the grandeur of The Devonshire Arms Hotel. It jumps suddenly from a hedgerow, rather than imposing on the view from afar. Built of grey stone (still nailing that stereotype), the hotel is a composite of various buildings from various ages, glued together by the money of the owner – the Duke of Devonshire. It’s a slightly confusing situation, Devon being so far from these moors; but, just imagine an ancient family family tree drawn straight from Game of Thrones and you get an understanding as to why it’s in his hands.

Standing majestically amongst a crop of trees at the edge of a large well-mown field, the hotel is flanked by a road on one side (across which lies an immaculate walled kitchen garden) and a fisherman-filled river on the other. The hotel’s grounds are separated from the thousands of acres of the Duke’s estate by sheep-proof iron-railings. Hills frame the picturesque scene and obscure the beauty of Bolton Priory’s (or Bolton Abbey to the ill-informed) ancient ruins, tucked out-of-sight, a half-mile along the river. From certain angles, if you could bottle this view, it would be the country’s greatest export.

Checking-in is a low key affair: the grand building’s entrance is a small porch to one side. The greeting though is pure country estate. Rugs to dry dogs (presumably whippets), wellies to hire, fires yet to be lit and a helicopter seen dusting off through the reception window. Aside from the head concierge, there’s a surprising lack of tweed. Instead, staff are turned out in professional suits, handing out keys and ironing boards efficiently, while directing the trays of afternoon tea, with all the trimmings, to the soft white linen of the conservatory table. Truly, this is the carb, sugar and dairy heavy food of the hardly fell-walker, not the keyboard tapping train-hermit who’s barely broken a sweat all day.

A run was called for to combat the calories, out across the lawn and through the browning leaves of the Autumn woodland that hugs the rivers edge. The sunset bounced through the arches of the ruined abbey, glistening off the fisherman’s lines, illuminating the sheep filled hills and dappling the floor of the deer filled forests. It was beautiful. 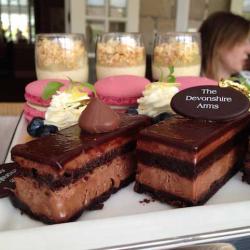 Legs warmed, lungs hurt, sun set, showered and plied with Champagne, the spilt crumbs and stained saucers of afternoon tea had been whisked away and replaced with a full tasting menu from award-winning chef Adam Smith. This is high cuisine indeed. Plates of perfectly arranged perfectly paired ingredients, served in a quantity that always leaves you salivating for the next course. That’s a good thing: a tasting menu is a marathon and you don’t want to get a stitch.

While a meal isn’t remembered by its bread, it often proves a good barometer for a restaurant. Bad bread generally precedes a bad meal. Here, I knew we were on to a winner with those first rolls. A small brown loaf, a brioche and a slice of white farmhouse were all delicious. Warm, crisp and flurry in the right places, with just a hint of salt, rather than the mouth-drying properties occasionally found in’gourmet’ bread.

The menu, post-bread, comprised seven dishes, plus cheese. Scallops, I’m told, are this chef’s signature dish. So, after a mildly disappointing artichoke cream, we sampled tender slices of scallop, with a strong blast of pork in the form of pig head croquettes. Thankfully, the scallops, not the artichoke, carried the hallmark of most of the cooking. Small dots of contrasting and complimentary flavours, woven intricately and positioned precisely across the plate. This approach results in a series of clean dishes, with thought, purpose and a complete lack of the smeared foams which some chefs still cling to.

Standing out from the crowd were the turbot, with cauliflower, cep mushroom and white truffle, and the deer loin, with celeriac, chestnut and pear. With the former dish, the meaty mushrooms delivered a strong bite to compliment the delicate fish and its crisp skin. With the deer, its smooth richness was cut by the sharp acidity of the pear. The final dish, the dessert, was a come-down I wasn’t anticipating.

Each dish equalled or bettered the previous, but the chocolate ganache with banana and praline ice cream, while intensely chocolaty, just didn’t do anything out of the ordinary. As I’d found a few days before in a Mayfair restaurant, being knocked over by chocolate doesn’t do enough to make a dessert accomplished.

In truth, I enjoyed my stay at The Devonshire Arms Hotel far more than I anticipated. Perhaps I’m guilty of a London-bias or snobbery, but having stayed recently in two 5-star hotels in Frances, I thought a trip north might bring me down to earth.

The location, the service and the food were all of the highest standards or at least the highest standards for the price charged Ã¢â‚¬â€œ apart, that is, from the location: you can’t buy a better slice of history, geography and breath-taking scenery. It’s worth a visit just for that aspect alone, the fact you can get a great meal and stay in a fantastic hotel are a bonus too.