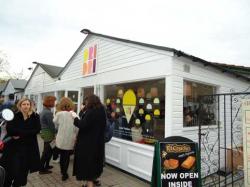 Dri Dri serves gelato, made in store everyday and served fresh from the Pozzeti counter. Fortunately you are not reading about a gelateria down a scenic gully in Italy, although that would appeal to some, this gelateria is based in our very own Chelsea Farmer’s Market

After the success of their first store on Portobello Road, Dri Dri have just opened their second store, which was clearly visible from afar as hoards of people queued outside for free gelato on opening day.

With over 20 flavours of gelato to choose from, and pear flavour fast becoming my favourite, I quickly emptied my tub nodding with pleasure at the intensity of the flavour and the texture of the gelato. It felt as if I had placed a juicy, cold pear in my mouth. I was assured the yogurt-flavoured gelato was not frozen yogurt but in fact yogur-flavoured gelato, it tasted so real, but how dothey do it?

I was given an education in the art as I learnt about a process called mantecazione. The method involves the ingredients being slow-mixed in a freezer, which enables the ingredients to be churned and frozen at the same time. This means air isn’t absorbed so giving a creamier texture than ice cream as well as a lot less fat. 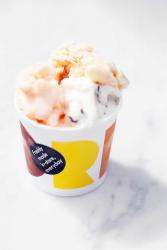 The process itself is one of the key components to perfect gelato, that and the original Italian recipes that Dri Dri so strictly follows. They are firmly against using artificial flavouring, colourings, and non-natural thickeners. Instead they use organic ingredients, anything born and raised from the earth is given a good old whirl in the mantecazione machine and the rest is history.

The milk is supplied from English farms with other ingredients coming from as far as Madagascar where the finest cocoa, coffee and vanilla beans are selected.

There is another tradition Dri Dri keeps well and that is serving the gelato straight from the authentic Pozetti counter. The Pozzeti counter ensures that, unlike Ice cream, the gelato stays at a slightly warmer temperature to retain its light texture.

The gelato contains up to 8% fat content and 0% on the sorbets so it’s light in your mouth and light on your waist line, compared to ice creams which may feel light in your mouth but attack you with it’s 24% in fat content. So you don’t have to feel guilty when taking home one of their generous sized ‘take home’ tubs.