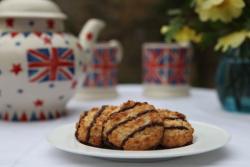 characteristic attributed to the Great British public. A tenner on the lottery might come in handy when your round comes around, but a whopping 90% surveyed reckoned they’d rather experience an act of kindness from their fellow man- sharing the last Rolo, perhaps? Culinary karma- the perfect digestive.

It’s nice to buy someone a drink. It’s nice to let them nab the remaining egg mayo sarnie at Pret. And it’s even nicer to sit round a table, metaphorically or literally break bread and have a good old chinwag. Chowing down in convivial dining rooms like Mark Hix’s Tramshed or a bustling brunch at burgeoning mini-chain Bills are, as a famous cake-manufacturing ‘Mr.’ would have it, exceedingly nice. Share the fodder, share the love.

Women are also, supposedly, doubly kind as their male counterparts. Applying the theory to our karmic quest for culinary nicety, it follows that we should frequent female-dominated kitchens and purloin our cooking wisdom from bosomy domesticated mamas. Angela Hartnett is surely one of the warmest characters to grace food television, and whips up a mean ravioli into the bargain. Not sure about flint-faced Fanny Cradock, though.

Undoubtedly men can cook up nice food, too. Gordon Ramsay’s character might be questionable, but sharing his pannacotta recipe with the world was a real kindness. In fact, most wibbly-wobbly food is kind, as is anything creamy, rich, hearty, warming, or soothing providing an edible ‘hug in a mug’- although if you get yours in a sachet from Bachelors, you’re likely to be the only mug in the vicinity. It’s commonly said that food is love and, seeing as we get to indulge at least three times daily, that’s pretty darn nice.

So if all this talk of niceness has you coming over all warm and fuzzy, why not nominate your kindest compatriot to receive a host of biscuit-y bounty under Mrs. Crimble’s ‘Share the Love‘ campaign? With 1,000 packs of goodies up for grabs every month, it could be a conspiracy to coerce even the crotchetiest curmudgeons amongst us to crack a smile- but when bribery is this sweet, it’s just fine. Free food- the nicest thing of all?