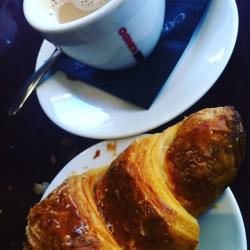 This time last Monday I was in Paris; walking into the Latin quarter to see where Earnest Hemingway and James Joyce lived, to see Paris’ Pantheon and soak in the atmosphere of student life. But really, honestly, I was there for some noodles. If you ever ask a member of my family for travel tips, chances are they’ll be food-related.

My brother stayed in Paris for a month and most of his tips came in the form of cafes to idle in and specific dishes to try. My mum’s best memory of Paris is some chicken she had in Saint-Germain-des-PrÃƒÂ©s. If you ask my sister for hers? She’d probably say something like seeing the Eiffel Tower sparkle at night, but she’d actually mean the French Onion soup she had in a brasserie near the Palais Garnier.

Along with the various places my brother recommended we visit, including Cafe St Regis just opposite the bridge to ÃƒÅ½le Saint-Louis on the Rue Jean du Bellay, we had success on our first night in town at Bistrot Smiley on Rue de Martyrs where I fell in love the Aperol Spritz and we ate the most inspired burger that contained Reblochon cheese, semi-dried tomatoes and onion jam. We even stumbled upon a couple of plucky Aussie’s serving it up 4th-wave-style at KB Cafe Shop in the trendy area of south Pigalle called So-Pi. 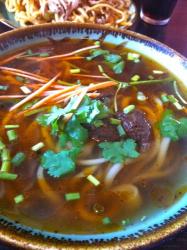 But let’s get back to the noodles. Hand-pulled noodles are the speciality as Chez Ann at 36 rue Mouffetard in the 5th arrondissement. A big student population always makes for good, cheap food and the 5th is no exception. Chez Ann is a funky-looking noodle place that is quite small, so you should aim to get in before the lunch rush.

Their noodles come in soup or in sauce, and for a small extra fee you can add a meat to your noodle dish and a starter of dumplings, wanton or battered vegetables. Both the saucy noodles and the soup were full of subtle flavours and incredible texture due to the fresh, soft noodles.

Later that night we would stumble into a tiny restaurant at 12 Rue Notre Dame de Lorette in the 9th and enjoy one of the most authentic Parisian dining experiences of our lives. Le Grain de Folie is gourmet traveller heaven because it’s one of those places that has sprung up in and of the moment. I’d had my eye on this place since we arrived in Paris, as it was on route from our hotel down to the river.

It’s run by a young couple and there’s no English version of the menu. The food is made on site, the menu is very small and decided upon the whim of the cook and the bounty of the market that week. We had both the baked St Marcelin cheese wrapped in ham and topped with honey, nuts and rosemary and the foie gras for starters.Both were excellent. 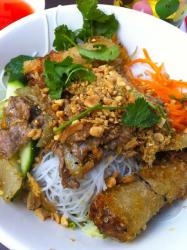 We had intended to move on to somewhere else for dinner but we enjoyed the cosy ambience so much that we stayed on for a main meal, a simple spinach salad with lardons and poached egg. Thanks to Le Grain de Folie I had the privilege of feeling like a local instead of a rube, even if only just for an hour.

The most serendipitous moment however, occurred in the Marais district. We’d had a bad morning after an unpleasant experience at one of the cafes lining the lovely Place des Vosges and were left in need of the toilet and some lunch. By the time we’d come back up to the Rue des Rosiers to try some of the fabled felafel at L’As du Fallafel, the lines had extended well past acceptable levels on both sides of the tiny shop front, and even for the rival felafel shop opposite.

The small street was jam-packed with tourists and Parisians looking for their Sunday falafel fix. To prevent an all-out disaster we quickly turned off Rue des Ecouffes and stood helpless and hungry. As we strolled down the cobbled lane we discovered a tiny little shop, empty but for two Vietnamese women slurping on some noodles. We were supposed to be eating Parisian food I realise, but it’s exactly this sort of flexible thinking and impulsive behaviour that makes for good experiences when you’re travelling. 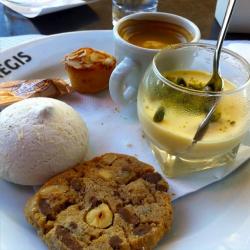 Pho Minh exists in a sea of Jewish restaurants and while I drooled over the cheesecake in the window at Schwartz’s deli, I remembered that I had not had a Vietnamese meal in almost 5 years. The menu is small but contains the only dish I ever really cared about in Vietnamese cuisine; bun bo xao. Bun bo is a warm salad of vermicelli noodles, pickled carrot, cucumber, fresh herbs and beef or spring rolls (or both) all dressed in the ubiquitous nuoc cham.

I’m not embarrassed to say that as I breathed in the aroma of the bowl in front of me and bit into the first mouthful, my eyes welled up a little. I was having a Proustian moment except that for me it was not madeleines but bun bo. Nostalgic feelings of my old neighbourhood in Sydney, my old life, my friends, came flooding back and I felt a bittersweet pang at all those memories, taste and otherwise as they swirled around in my head. That moment was, absurdly, the highlight of my trip to Paris.

Sure, we toured the opera house, were confused by the talking mounted wild boar’s head at the museum of Hunting and Nature; and yes we segwayed through the evening streets of Paris, marvelled at the Korean wedding couples adorning Notre Dame and amused by a parade of roller-bladers whizzing by with boom-boxes. But it seems sentiment and the confounding nature of life won out in the end and I was struck the heaviest blow by a bowl of noodles.