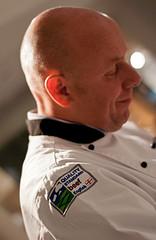 I come from a family of beef lovers. When BSE hit, we craved beef so badly that on my mother’s holiday to Japan she brought back kobe beef steaks. When the suitcase containing said steaks went missing, we cried bitterly and sulked for the entire time the suitcase remained missing; when it was finally returned to us we practically ate the beef raw, tearing into it like a pack of feral animals. My point is that we – I – love beef. Therefore, upon EBLEX’s invitation to taste steaks, I was on board faster than you could say, ‘rib eye, medium rare’.

EBLEX have been working hard over the better part of a decade to create a quality standard for beef and lamb. It’s a grand undertaking – essentially they’re trying to add value to both chuck and round and revolutionise the way that the UK views meat – not an easy task. Along with the difficulties with introducing new cuts of meat to the UK (which, interestingly, have been sold in the States for a very long time, as EBLEX have been researching), they are also faced with the ‘tradition’ arguments. “This is the way we’ve always done it,” they argue, which head of product development Mike Whittemore knows well and works hard to combat. It’s slow progress with currently only 18% of the industry on board but the proof is in the pudding – just taste the meat and the difference is obvious.

To bear the EBLEX quality standard mark is no simple feat. Every single aspect must be assured and accredited to produce “clean commercial beef” – to bear the brand logo the meat must earn it but perhaps that’s the best reason to trust EBLEX. 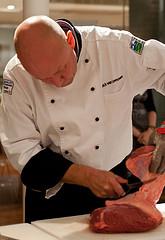 Next up, Master Butcher Dick Van Leeuwen. As he talked he plopped hefty pieces of beef around the table, the sound a sex fiend’s dream, before picking up his sharpened tool and deftly slicing with the dreamlike precision of a professional.

Watching him was mesmerising – he was an artist, each stroke of the blade like a painter’s brush. He talked continuously, throwing in a joke here, a nugget of information there. How long had it taken him to gain this level of skill? A pause. “In my country you must go to school… for six years,” an audible gasp went around the room. Dick shrugged, “But this? This is only… hm, year two work.” He slapped another steak on the table.

Denise Spencer-Walker, a self-proclaimed “old school” Home Economist and EBLEX’s Food Adviser, prepared the tasting. “The most important thing,” she told us, “is to let the meat rest after you’ve cooked it. That way you give it a chance to relax and release the juices back into the meat.” First up for tasting, fillet steaks for comparison, then bistro and picanha.

The bistro was similar to the fillet but with a much meatier flavour but the picanha? My God. This was unlike any steak I’d eaten before – soft, tender and melt-in-your-mouth delicious, it was a guaranteed turn on. 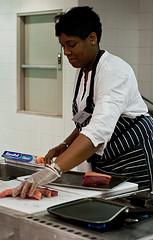 Next up, the bavette and flat iron steaks, the latter a firm “man favourite,” as Denise called it. The texture of the bavette was bizarre – the grain was too pronounced for my liking, it was almost like chewing a piece of raw meat – but the flat iron was surprisingly delicious. It wasn’t quite as good as the picanha but the flavour was heady with iron – I could almost feel the blood pouring through my veins with every bite.

So where would EBLEX go from here? They were working on making the UK a better place for meat, with supermarkets like Asda, The Co-Op and Tesco’s Finest already on board and Waitrose interested. Not only were various local butchers around the country following EBLEX’s meat standards, in general the standard of categories on meat had followed suit and risen across the bar. Would there ever come a time when the US and UK would have corresponding meat cuts and standardisation? Potentially but that day is still a long way off. Right now EBLEX are concentrating on bringing more cuts into the UK market and promoting those but there was more, much more, in their future. Denver steaks, for one, are currently being developed and will be ready for release imminently.

I admit, by this point I was a little steak-ed out, my eyes droopy with the sudden influx of red meat. One minute I was chewing steak, the next I was on the Tube home, clutching a cooler bag filled with beef and steak knives, struggling to keep my eyes open and with no clue where the past half hour had gone. It was the perfect way to finish my meat journey. Sure I was tired and full but honestly? Worth it.