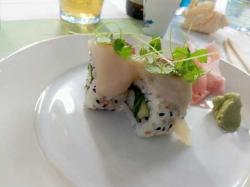 Even for the conscientious eaters amongst us, the idea of sustainability has become something of a cliché: menus riddled with buzz words proclaiming the chef’s commitment to carbon neutral, zero food miles, sustainably sourced produce. However, there is one area where chefs and restaurant owners can very easily show their eco-credentials: the type of fish they put on their menus.

You might remember the hoo-ha a couple of years ago coinciding with the release of a film entitled The End of the Line, which laid bare the perilous condition of many of the world’s fish stocks. Restaurants selling endangered Blue fin Tuna suddenly found themselves at the centre of an unwelcome media storm with calls for boycott and sustainability protesters outside their doors.

But, there are eateries whose sushi you can eat with a clear conscience. One of these is Feng Sushi, the London based sushi delivery and restaurant group. A member of the Sustainable Restaurant Association, their wild fish is all from stocks which are not currently at risk, they carefully pick their suppliers of farmed fish and even the chopsticks and delivery boxes are from sustainable wood sources.

Evidently this is all good stuff, but a waste if the sushi isn’t up to scratch taste-wise. Well, I was fortunate enough to recently spend an evening with Silla Bjerrum, the Danish co-founder of Feng Sushi, at their outlet at Billingsgate Market, and I can confirm that in matters of taste, their sushi certainly is up to scratch.

Having braved the torrential rain showers and the flood of office workers streaming the other way into Canary Wharf station, I was very grateful to receive on arrival a warm green tea, followed by an equally warming champagne cocktail made with aged sake – a new and enjoyable variation of the old theme.

Then, as a succession of plates of sashimi, nigiri, donburi and other such delicacies were placed in front of me, I found enough time in-between mouthfuls to quiz Silla about sushi, sushi etiquette and sustainability. Not only did she provide some interesting answers, especially regarding the proposed EU ban on discards, her sushi knife never slipped once, as she filleted, sliced and diced the salmon, hand-dived scallop, mackerel, lemon sole and cuttlefish.

Far, far superior to the stuff you pick up in those sad little plastic boxes from the supermarket, this was the real deal. It reminded me after a couple of recent dodgy experiences, what good sushi should taste like and I wouldn’t hesitate to head back (with a clear conscience) for a second helping.

By Foodepedia14 May 2012Articles