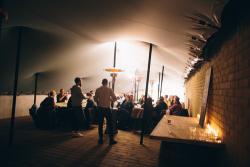 This food writing lark leads you down some odd paths: I’ve lunched at the Fat Duck; had dinner at five star hotels in Mayfair; but before last week, I had never eaten melted cheese on a roof terrace overlooking a gas works in Hackney.

Don’t let the gas works put you off though, because then you’d be missing out on all that melted cheeseÃ¢â‚¬Â¦and who doesn’t like melted cheese? Forza Win(ter) is the cold weather reincarnation of Forza Win, an open-air supper club that served wood fired pizza from the very same Hackney rooftop throughout the warm summer months.  Instead of pizza, they have taken inspiration from the snowy alpine north of Italy, and are dishing up fonduta – bowls of melted cheese – with roasted root vegetables, meats and other such delicacies.

Don’t confuse an Italian fonduta with a French fondue though, as there are some key differences, and you might have the guardian forces of Italian cuisine after you if you do. Fonduta is made by soaking young fontal cheese in milk and cream, which you then melt over a low heat before whisking in a couple of egg yolks (just to gild the lily, you might say). Not for the faint of heart and perfect sustenance after a day spent hiking through the Dolomites.

Unfortunately my walk up Hackney Road did not remind me of previous trips to Cortina d’Ampezzo, although walking up the iron staircase to the roof terrace did remind me slightly of traversing along a via ferrata; almost making up for the lack of limestone peaks. As a nod to the season, the roof terrace has been covered with a stretchy tarpaulin (flown in all the way from South Africa for the occasion), and with plenty of patio heaters and sympathetic lighting they have managed to create a pretty cosy atmosphere. This cosiness was augmented by the addition of a hot buttered rum, which was placed into my hand by a friendly barman on arrival – very Harry Potter, but none the worse for that.

Forza Win(ter) being more of a supper club than pop-up restaurant means that you sit on communal tables of ten and there’s no choice of food. Instead a big pan of fonduta is placed onto a hotplate in the middle of the table, which you then ladle into bowls and eat with the roasted vegetables and meats, as and when they arrive. The best of these was the roasted squash, which only arrived at the end of the meal when I was almost cheesed out, but I manfully managed to scoff half a pan’s worth before seeing sense. So with all of this, plus a gelato from Gelupo for dessert, you get plenty to eat for £30 a head.

The guys behind Forza Win(ter) have done a great job promoting it, so they are pretty much booked up until Christmas, although keep checking for last minute availability. However, they are also planning on getting some January dates in the diary – these would make for a perfect evening to warm you up for a week’s skiing in Cortina, or to compensate you if you’ve just returned from that annual powder fix.

So, with plenty of melted cheese, fresh vegetables, meats from the Ginger Pig, top notch ice-cream and some excellent wine from Wondering Wine and Bibendum, what’s not to like? Well your local dietician or cardiologist might not recommend at night at Forza Win(ter), but I do!