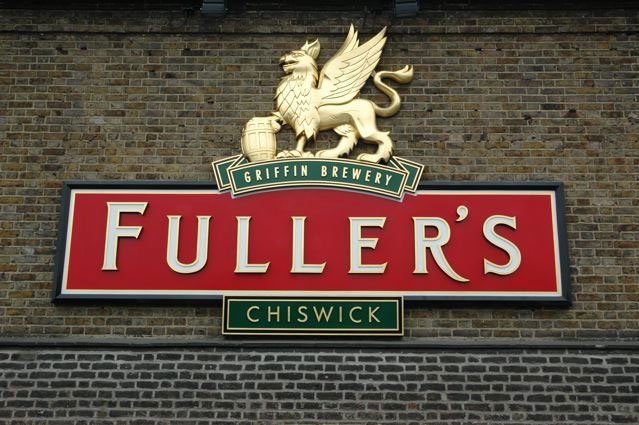 Glance left as you drive down the A4 out of London and you can’t help but notice the landmark Fuller’s brewing complex. Proving that he can indeed organise something in a brewery, Nick Harman went inside for a better drink, err..look

‘Beer is a form of food,’ says Jane Peyton one of Fuller’s Brewery’s guides. ‘In fact in ancient times it was liquid bread and you had to filter the solids with your teeth to get to the liquid. The first straws were pretty much invented to make it easier.’ Food eh? That’s just what a mate of mine used to say too, he lived on Guinness and Mars bars as I recall and never seemed particularly lacking in energy.

Beer is on our minds and very much in the air as we stand together outside the beautiful old brewery owner’s house cloaked in a wisteria that was brought back from China almost two hundred years ago. You can smell beer and sense it, as well as the rich history of London’s only remaining traditional family brewer. The rather industrial place you see from the A4 is quite different when viewed from the riverside. Here it is quaint and charming; old buildings sit next to the river that has been winding its way past a brewery for centuries. ‘Fullers bought the site in 1829 from a previous brewer who had themselves been here hundreds of years ‘Jane explains. ‘Back then this was just a fishing village, the river water was clean and once it was brewed into beer was actually safer to drink than water itself. And of course the river was a highway, capable of carrying the great heavy loads, which couldn’t be transported by road. There was even a well here too.’ 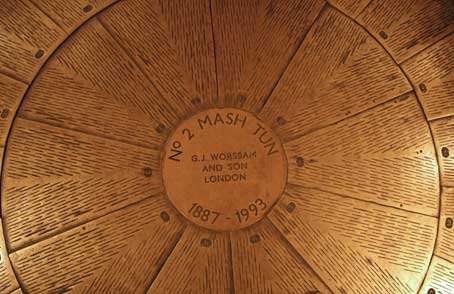 Today of course Fullers takes its water from the London mains supply, at night so as to not lower the pressure for the local residents. You need a lot of water to make beer because that is pretty much all beer is. Fullers brew a million pints of beer a week, around sixty million pints a year, which means half a million pints of water a night are taken out of the London mains. Four out of those five pints are used for other purposes such as cooling and washing, the remainder becomes beer. And what a variety of beer too, most of us know London Pride, ESB and Chiswick Bitter but there are plenty more Fullers beers on draught and in bottles to try, each disticntive and different and a match for all kinds of foods. In fact Fuller’s range of ales has won awards in the UK and overseas, including being named Champion Beer of Britain, at CAMRA’s Great British Beer Festival five times.

Beer was probably the third alcoholic drink invented after wine and mead, she tells us as we move off and in fact it was only really in the 19th century that Carlsberg worked out the actual science of brewing and ever since then beer has got markedly better.

So how does boring old water become beer? By a process as old as time itself as Jane tells us. Beer is just water, hops, malted cereal and yeast. How those four ingredients are handled is what creates the wide variety of beers available. In British pubs we have lager, stout, bitter and sometimes a wheat beer, but outside pubs there are at least fifty varieties to choose from in the UK and around a hundred worldwide.

We go inside the main building where Fullers begin their tours; here state of the art brewing equipment sits next to carefully maintained examples of the ancient originals. The basic technique of brewing has really not changed at all. Hot water is sprayed over cereal in a Mash Tun. The run off liquid contains sugar, flavour and colour, it is this liquid, Sweet Wort, which will have the hops, and finally the yeast added to begin the magical fermentation process. The used up cereal is sold on to farmers as cattle feed. 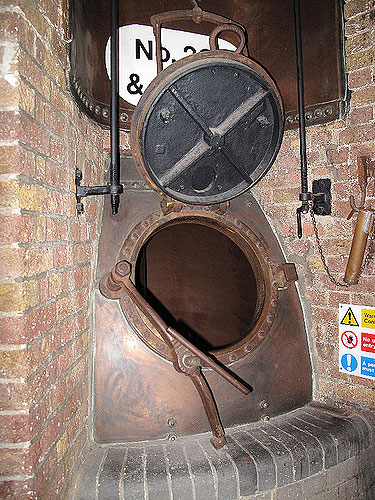 ‘A country will use the cereal native to it ,’ Jane explains as we manoeuvre past the massive modern mash tuns and climb metal stairs and landings that remind me of playing early shoot-em-up video games, except here my legs ache a lot more. ‘In England we use barley, in South America its corn, Africa uses millet. The barley is soaked in water to start it germinating, and then heated ‘kilned’ to stop the germination at just the right point. It’s the Maltster’s skill to decide the timings and the heat, more roasted grains give a darker beer such as stout, for example.’ From a box on the wall she shows us different types and styles of malt to clarify the point. The roasted grains are crushed into ‘grist’ and sent to the mash tun.

The old mash tun is quite a sight, one that the old time brewers often saw from the inside. Modern versions are self-cleaning, but the old ones needed five tons of spent cereal shifted out by hand. ‘That took two men inside with shovels three hours or so,’ Jane says. This was then a wet brewery, which meant that the workers could drink all day, so it was a bit like old time journalism, ho ho. ‘These men received Beer tokens in their wage packet for any extra work and so the rotten job of cleaning out the mash tun was actually popular as the men got lots of beer tokens for doing it.’

Up in the hops room we can smell the fragrant flowers before we even open the door. In here they keep the hops fresh under chilled conditions with fresh air flowing all the time. The hops themselves have been compressed into pellets for ease of use and resemble the sort of thing you’d feed a rabbit. Hops we are told are remarkably complex and useful things, having the power to kill bacteria and are even an ingredient in natural sleeping tablets. So that’s why I feel sleepy after seven pints. 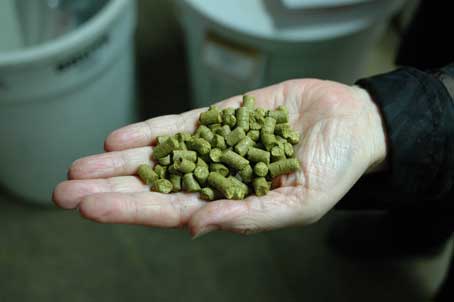 ‘We use Kent hops, although there are over a hundred hops to choose from,’ says Jane pulling a handful out for us to sniff. ‘They are tangy, lemony and highly aromatic and like all hops are a natural preservative.’

Back at the new modern mash tuns, we peer through little portholes wiped by a cute internal windscreen wiper, to see the cereal. Peering back at us through plate glass are the brewers in their futuristic mission control style room, all computer screens and flashing lights and dials.

The sweet wort from these tuns goes to skyscraper high ‘coppers’, immensely tall cylinders so big that the A4 had to be closed, and the brewery’s roof taken off, when these were brought in to be installed. Hops are added using a bucket, which is rather a charming old tech touch, and the whole lot is boiled for about an hour to make ‘small beer’ – effectively beer that as yet has no alcohol.

Once the small beer has cooled to 17 degrees C, the magic yeast is added, or ‘pitched’, and the yeast consumes the sugars in the mix, generating in return carbon dioxide and alcohol. The yeast at Fuller’s, chosen in 1941 from hundreds available, gives a fruity flavour and aroma. Because yeast grows while feeding, Fuller’s end up with twice the amount of yeast they started off with and some is used the next time, while the surplus is sold- some brewers sell theirs to pig farmers, some is used in Vitamin B tablets and some, famously, ends up as Marmite. 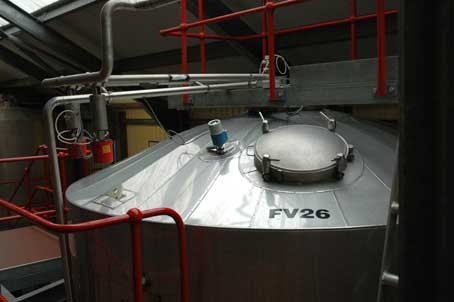 The beer brews for about a week. The longer it ferments the higher the alcohol content and it’s the alcohol content that determines the tax paid to the government so Fullers beers are around 4-5%. The beer is given a few days to mature and then it’s kegged up in an incredibly noisy room where old aluminium kegs come in at one end, are pressure steam cleaned and sterilised and then refilled and sealed. From here, they are sent to the Fuller’s pubs where the beer settles for a few days before being served. The whole process takes about three weeks from water to beer in your glass, unthinkable speed for any wine producer but one which keeps pace with the thirsty London drinker.

‘Well actually,’ says Jane as we leave, we do actually perform one slow and special maturing process,’ she indicates some ancient wooden barrels. ‘These are old Glenmorangie whisky barrels and we have put our best beer in to mature and collect all the flavours and aromas. We sell the bottles as Brewers Reserve, a collector’s edition. It’s a bit of fun and popular too.’

Roll out the barrels

Out in the sunlight, as delivery lorries roll away to far points of London with London’s local brew, you get a real sense of the pride (London Pride) that all the workers feel at Fullers. The heritage, the ancient buildings, the brewing family and the sense that here are people fighting the growth of cheap lager with a range of products that are crafted, singular and to be appreciated and enjoyed. 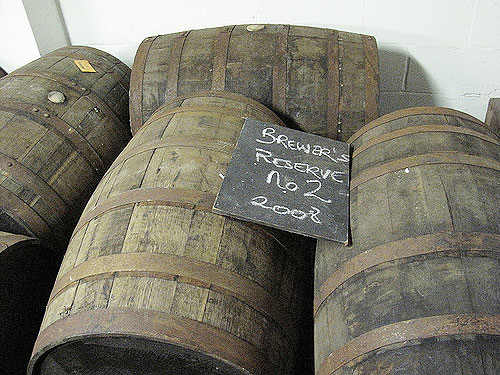 It certainly works. Fuller’s profit announcement the week after we left was a very healthy one for the times, one at odds with prevailing trends in beer and lager brewing. Given their obvious passion and expertise for their product it is perhaps no surprise. Fuller’s don’t follow fashion, they follow their heart and that is what top local produce is all about.

You can go on a tour too by visiting Fuller’s website and, at any time, you can visit the Fuller’s shop which stocks the full range of Fuller’s award-winning beers, including some cask beers.

Next week an interview with Fuller’s Master Brewer John Keeling