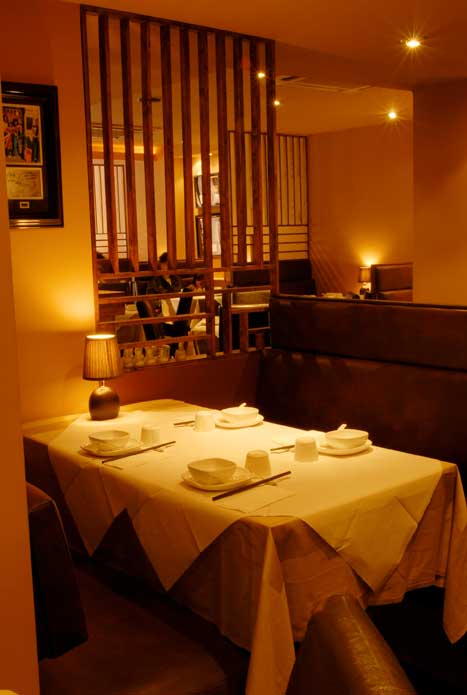 The arrival of Keelung in London has certainly attracted instant attention. The night we went a national critic pompously waddled in soon after. Memo to national critics; if you’re serious about reviewing anonymously don’t let them print your picture next to your column. Then on my way home a free copy of the Standard was thrust into my hand. There a literary critic reviewed Keelung, while on the next page a fashion critic reviewed a different restaurant. Presumably, all this multi-tasking is an economy move; next week expect the rugby correspondent to review a musical and their finance expert to write about gardening.

Anyhoo, Keelung is news because it is the latest venture from Geoffrey Leong who also owns Hi Sushi, Goldfish and Koi. You know those don’t you? Right. Keelung is at the west end of Lisle Street, a street that is the essence of Chinatown with its mixture of shops and restaurants. What’s more, because one side of the street is just the brick backs of all the theatres and cinemas, it’s a bit edgy and Bladerunner-esque too.

Keelung is posher than all the rest mind; hardly a ‘Chinese’ restaurant at all really, even the lighting is subtle. It is in fact a Taiwanese restaurant as the name suggests specialising in Street Food and fresh fish. Indeed so fresh is the fish, displayed in crates just inside the door, that the sea bass and mullet stare at you with accusing bright eyes, the crabs blow bubbles and neighbouring lobsters thoughtfully flex their claws against the restraining rubber bands.

The menus are a bit of a nightmare though; you have one menu with the street food, mains and noodle dishes etc. Then there is a sheet of paper listing all the available seafood that day, and the ten or so styles of cooking you can choose from, some of which have an extra mark indicating Chef’s recommendations. Then there is a separate card with Chef’s specials. I must have picked up and put down all of these about a dozen times in my increasingly elderly confusion before just diving in haphazardly. Staff are sweet and try to be helpful but have a habit of asking the same questions (water?) again and again and some do not seem to understand the answers.

Xiao Long Bao were a must try I had been told. About now I am supposed to critique the skin’s thickness, top knot etc but I will leave that to self-appointed experts on Taiwanese food. Did we like them? That seems a more relevant question and yes, we did. Pop a whole one in your mouth, because cutting them wastes all that broth inside, and wait for the explosion. It was tasty broth and there was a good, if a little under-seasoned, pork filling. The first couple scald the mouth though, so watch out. Deep fried oysters were pretty good too, basically a sort of Oyster Po’Boys but with Taiwanese dipping sauce. The batter was a bit dark, which may have simply been the staining from the oyster, but it was reasonably crisp and the portions generous with the oysters delivering a good flavour after the batter’s initial burst.

Sichuan pepper prawns were finger burning hot and looked great with the cracked pepper stuck to the shells by a light, transparent batter. Messy to eat – scoff the lot, minus head, then extract shells from mouth – they had true freshness, but the pepper was underpowered with not enough of the tingling of the tongue or the lingering citrus notes you expect.

Bravely we tried pig’s liver with morning glory. The story here was a bit too strong for us, although I do normally like offal an awful lot, and the morning glory was a hard chew too. Much, much better was a dish simply called Braised Pork Belly. This had to be eaten with the hands thus causing a terrible splatter problem, but the pork was divine and the fat delicious. The rich dark sauce on the pork also slipped down my sleeves with a pleasant warm feeling.

Seafood noodle was standard stuff but stood out from what you might get in your local by using very fresh seafood, including some dinky little clams The sauce on the noodles made me madly thirsty however and hours later I was still swigging desperately from a litre bottle of water by my bed.

Desserts did we not. Dereliction of duty perhaps but we were stuffed. Everything we had was pretty okay, but we felt that you couldn’t really judge such a large menu from such a necessarily small sample. Even so, the food, décor, and price make Keelung a better bet than the more basic places in Chinatown, which only work when you’re young and want to rough it. The seafood in particular will have me diving back in soon. Well worth a try.
nick harman