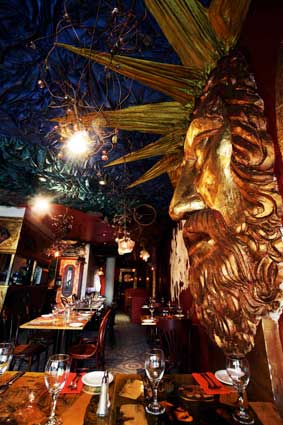 The last time I came here it was called The Chalet Suisse. It was owned by a school friend’s dad and I was a short trousered twelve year old who was given cannelloni so good that I have spent much of my life trying to find one better.

So, nostalgia rules as I enter the whimsical world of Peter Ilic. It was he, you may recall, who did the deal whereby diners at Little Bay London paid only what they thought the meal was worth. It garnered him shed loads of publicity worldwide and most diners actually paid more than he would have charged anyway.

Well I am not surprised, the thing you have to say about Little Bay is that their food is very good indeed, surprisingly good, remarkably good especially when it is so bloody cheap. You also have to say that the restaurants themselves are rather odd.

This one seems normal enough in the front and is packed out with diners on a Monday night, which is an achievement not to be sniffed at, but out the back is a mini theatre. Patrons sit in boxes off the ground with views down to the floor and across to other tables, the whole thing decorated with wood painted to resemble ornate curtains, or gilded with gold paint a la Changing Rooms. It’s a bit of an eye shock and the little staircase up to our box is rather narrow for my well-proportioned friend, who has to gingerly slide himself up sideways as we listen out for any ominous cracking sounds.

Once up we can’t stop grinning. It is so mad and yet rather fun and such a nice change from the temples of fine dining towards which I am becoming a little jaded. The waitress, Eastern European naturally as owner Peter Ilic is himself a Serbian, shimmies up the stairs to deliver a basket of mixed breads and then disappears sharply down again like a fireman off on a ‘shout’. She seems unhurt. The staff at Little Bay certainly don’t hang about.

The menu is an example of how not to scare diners. All the starters are the same price, as are mains and desserts. Nice and uncomplicated. The descriptions are simple too, but the dishes are not boring and just the sort of thing you want to eat. And, at £2.95 a starter, hardly bank busting either. My belly of pork is meltingly tender; the black pudding is studded with pinpricks of fat and the sliced apple is cooked through. A few lettuce leaves well covered with a decent acidic dressing completes a fine dish that puts pricier places to shame. Serbians know what they are doing with pork and offal, that’s for sure. The well-respected chef/patron Tom Ilic over in Battersea is Peter Ilic’s nephew by the way.

Even so, a veggie starter of feta cheese and red pepper terrine is also very good. Okay the toast was Costcutter sliced white, but really at this price if that’s the only corner cut we don’t care. Suddenly from below a massive aria hoves into view, goodness me it’s live opera from a woman with one hell of a pair of lungs on her. Mondays and Thursday nights are opera nights and no one warned us.

To be fair it’s all part of the fun and I am too busy enjoying Pork medallions on mash with pickled cabbage and mushroom veloute. The pork is moist and tender, the mash is spot on and the vegetables packed with taste. The Roast Barbary duck with red cabbage and honey ginger sauce is almost as good. Chef could have left it pinker, we reckon he is just playing safe to local tastes, but it’s still a great piece of quacker and the chips we asked for instead of mash are thin, golden and crispy. Both courses £6.85 each how do they make a profit?

Will dessert let Little Bay down? No. White chocolate and pistachio parfait is just the right degree of frozen and sits in a puddle of rich chocolate sauce. Rhubarb with ginger is seasonal and spot on. £2.95 each.

In any time this would score highly as classic European bistro food done very well indeed. Add in recession busting prices and free entertainment, character and whimsy and it pushes all my buttons, including the ones on my waist band. A great place to eat.