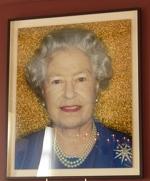 Like love, gin is seemingly all around us. Until recently eclipsed by the focus on premium vodkas, it’s a spirit that is starting to grab more and more attention. This seems to be for a number of reasons, but I’d like to think the primary one is simply because it’s a damn fine drink. I would agree with David Embury, who described it as ‘the most important of cocktail bases’. A good gin and tonic is one of the great drinking experiences of our times. Quintessentially English, it speaks of hot summer afternoons and middle class drinks parties.

Yet what makes a good gin? Try to describe the flavour of your favourite tipple and the words dance on your tongue whilst never quite finding their rhythm. The folks at Bombay Sapphire invited me along to the St Pancras hotel to try out something that might get the words dancing to the right tune: An Aroma Kit, designed to get your nose trained up and sniffing with the best of them.

All the better to articulate exactly why this or that gin is the one that does it for you. This consisted of a series of bottles of individual flavour molecules, which you dipped small strips of paper into and then sniffed, as though at some sort of homeopathic opium den.

Given the late Queen Mother’s reputed fondness for gin, the event’s location in the royal suite seemed particularly fitting. The room was tastefully strewn with all manner of gin paraphernalia although this was overshadowed by a looming portrait of our monarch. Backed by a glittery gold border, she had the air of somebody spoiling for a fight. It certainly dampened any thoughts of mischief I might have entertained.

Before we got down to the gin sniffing, we learnt a bit more about the drink itself. Bombay Sapphire is vapour distilled, the only major gin and potentially the only gin to be made in this way. This means that the 100% neutral grain spirit is placed in a copper still and heated till the vapours travel through the infusion basket, which are then condensed down a column. This is what results in its distinctive taste.

History lesson over, we got down to the serious business of tasting, although this was mainly sniffing due to the fact that 95% of flavour is smell. By training your nose like a boozehound crossed with a sniffer dog you can develop your palate and flavour vocabulary. 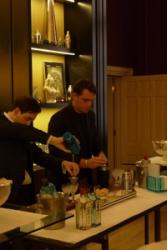 Juniper is so often singled out as the cause for many people’s hate of gin, yet I learnt that the taste and smell of juniper was difficult to pin down to a single flavour molecule. Rather four aspects were isolated: pine, green, herbaceous, and a resin like odour. For anybody who is anti-juniper, it was interesting to note that many gins try to pick up a particular aspect of the juniper flavour, and so whilst you may not enjoy its grassy aspects, a more pine like scent may appeal. Given this, there is almost certainly a gin out there for you.

We then moved through a ‘smelling’ of a series of different gins and gin components. These ranged from varying levels of juniper infusion to different distillation methods. We used the individual flavour molecules to help isolate the flavours we could detect and compare the various glasses. The resulting sight of a table full of people intently sniffing bits of paper was dali-esque in its construction. At the start I found it suprisingly difficult but with the aid of the Aroma Kit I was increasingly more confident in my judgement.

The purpose of the kit is to give bartenders and drinkers alike a newer vocabulary; to be able to say that Bombay Sapphire appeals because of the coriander notes, or that it’s the distinctive cucumber taste that gives Hendricks its edge.

Armed with noses well on their way to being highly trained, we tried a variety of cocktails made with different gins. It was telling how much easier it was to articulate your thoughts after a brief go on the Aroma Kit. Next time you try a glass of gin, see if you can try to pick out the varying smells. For me, being able to detect what it is about the gin that I like has enhanced the whole experience for me.