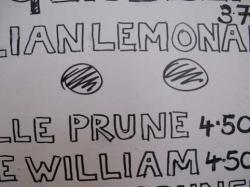 I like simple grilling, frying and roasting but an artichoke subjected to intense heat resembles something saved from a bonfire with a lot of burnt leaves and a subsequent vicious struggle for the tender centre. Grilling lemons adds a pleasant caramilisation but makes the seeds even bitterer in the mouth than usual. The Fritto Misto at Ducksoup, a new London restaurant, might be better named a Fritto Mysterioso, as in ‘why would they do that?’

It’s a small place, as narrow as the corridors on old trains; your elbow is jogged remorselessly every time someone goes past. Removing the plaster from the walls has widened it by a few inches, and given it the current requisite ‘vibe’, but makes it look a little unfinished and, at £14 for what was a small Fritto Misto, a little cheap.

Only open two weeks, and already drooled over by the kind of people who see a new restaurant as a stamp to be added to the collection, Ducksoup is the work of some ex Hix staff. They’ve carefully watched what hits the spot on Twitter and served up a suitably zeitgeist-friendly place. There’s nothing wrong with that of course, far too many restaurants are opened by people who have done no research at all and which consequently fail. 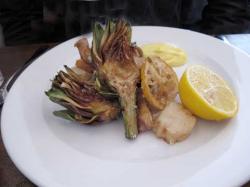 The kitchen is keeping things simple, another sensible idea, and the menu is handwritten on a scrap of paper, which is corny but obviously cuts costs and adds cool. It’s not a bad menu for choice though, most of it appeals in a ‘lets get a bite to eat before the cinema’ kind of way and the female staff are sweet. The males though are rather standoffish and ‘up themselves’, as J charitably put it after we were safely out of earshot.

Fried squid with salt and fennel from the bar snack menu was teensy-tiny but tasty, even if the squid was rather brown suggesting that the oil may have been too hot. The main thing was that the squid was tender. A small bowl of excellent sliced saucissson was crisp and salty, but of course no cooking involved there just good sourcing.

Quail had run out, which was a shame, as I wanted to see how the kitchen actually cooked, as opposed to fried so I had Lardo di Colonna instead. Not exactly cooking either, this came sliced from the bar, thus giving a man otherwise engaged in checking his reflection something to do, and was served on bread strewn with hunks of Parmesan topped with a perky dressing and a scattering of luminous parsley.

The whole ensemble was a bugger to cut up, the knives being totally inadequate for the job, so I set the table rocking madly as I sawed ineffectually away. It was certainly enjoyable but then I defy anyone to make such uncooked ingredients taste bad, although the Parmesan’s saltiness threatened to mug a Lardo that was otherwise deeply fatty and flavoursome.

Dishes came out ‘when ready’; a neat trick which means you can’t complain if you’ve finished your course before your partner has had his. J’s Fritto when it came was overall worth waiting for overall, but the fish was a sea of bones that had him constantly breaking off conversation to gingerly extract them from his mouth. The saffron mayo was fluffily well made but the advertised oyster was missing unless it was the rather rubbery thing J swallowed without really noticing. We rather expected a langoustine too for some reason, but there was instead a scallop which miraculously had survived frying 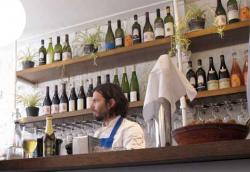 A bottle of beer called ‘Fucking Hell’, as in ‘Fucking hell, it’s £4.00 a bottle!’, was okay for me but the large range of Bio wines (all the rage, don’t you know) written up on any bit of spare white wall or tile available seem well worth exploring if you have the time and money.

And there’s the rub. Despite it’s low-rent, quasi-shabbiness, Ducksoup is not exactly cheap and we left still hungry and £40 down. Yes we could have eaten more, but it would have sent the bill far too high for a quick lunch.

So will it survive longer than previous occupant Zilli? I suspect it will ride a wave for a while, supported on the spume and foam of novelty and social media, but it may struggle for a regular Soho customer base when the trend surfers have moved on to the next breaker.