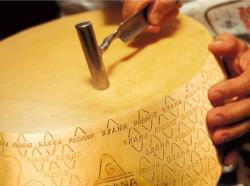 Similarly to the hops-barley-water-yeast combination that culminates in beer, we all know that milk is churned and whey extracted; meat is cured with a shrivelling quantity of salt and constant gust of air. Both are left to absorb and flavours intensify.

On my trip to Italy it was still a marvel to visit Grana Padano cheese and Prosciutto di San Daniele factories during a cheese, ham and wine inhalation across north-east Italy. It’s a mawkish notion but passion, care and proximity to the source truly enhances the flavour. Unsurprisingly, in a nation where every course is a meal in itself, there is a buoyant patriotism towards the certified produce of the region. 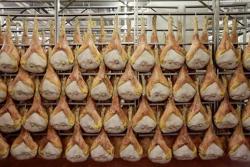 Here’s a digression: the Greek manufacturers of Feta cheese fought legal proceedings against a Denmark-based producer to keep the rights to the name’feta’. Feta conjures images of a rich succulent salad, goats herding mountains, stuffed peppers and vines. Hardly the vision that comes to mind with one of the furthest countries north of the Mediterranean.

While in Italy I travelled to see the Italian equivalents of regulated produce in and around Veneto region. I toured the factories of two prime exports that have been awarded a similar sort of culinary copyright: Grana Padano cheese and Prosciutto di San Daniele. Both are created with specific methods that are EU safe-guarded in the Protected Designation of Origin (PDO) scheme. Consortiums have been established as a branch of PDO to protect the century-old methods of production and unique attributes only the air of Veneto and expertise in Lake Garda can yield. This trip demonstrated first-hand that authoritative regulation and artisanal cuisine can co-exist.

This was not the Italy of Pizza, the Pantheon or Pompeii. This was the Italy of sleepy towns on mountainsides. An agricultural terrain of waist-high cornfields stretching for miles; distinct, diagonal lines of vines at every turn. I was nearby Verona at the opulent Lake Garda – the largest lake in the country and easily mistaken for a shore. Nearby is home to the ombudsman of Grana Padano cheese Ã¢â‚¬â€œ the Consorzio Grana Padano.  The hard Italian cheese is characterised by its grainy, crumbly texture. The flavour is salty without being too sharp and rich without being too creamy. The earliest records cite the cheese was first in production in around 1,100 AD. The great thinkers of the time – monks – conceived this method to preserve milk that was only seasonally plentiful. 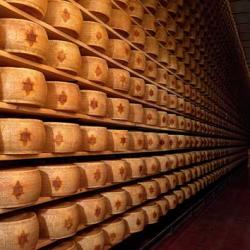 While the scale may be larger and the mixing mechanised, Grana Padano retains its individuality by adhering strictly to the monastic method perfected almost 1 000 years ago. In the factory I visited it was all-hands on deck (and literally reminiscent of a steam-liner engine room) as workers hurried around churning, copper basins as heavy sacks of whey whizzed around their heads on hooks. The authority of the mixing room – the Casaro – plunges his hand into the mixture and ensures the consistency of the curd is of the optimum consistency and size. As soon as he decrees, it must be removed manually and immediately pressed into a wheel and left to mature in warehouses for at least nine months.

As we chatted on the tour, conversation led to precarious nature of the sky-grazing shelves of cheese. We were led into the factory offices and shown the devastating consequences for the Grana Padano factory.  Due to the freestanding, dauntingly high shelves that store the hulk of wheels, the tremor caused them to waver, topple and fall, ending in a domino-effect calamity. The hardened outer layers that kept the cheese within intensifying in flavour and free from pathogens ruptured. Not a single wheel could be savaged out of approximately 100, 000. 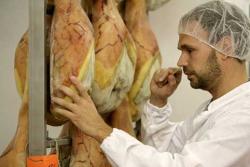 Residents from the surrounding areas Ã¢â‚¬â€œmany of whom were relations to the workers Ã¢â‚¬â€œvolunteered their time day and night in a two month clean-up effort. As my journey led me three house south west to a small town overlooking the Alps – San Daniele Ã¢â‚¬â€œ I saw that their signature prosciutto was as fastidiously monitored as Grana Padano, and the results as celebrated and cherished.

Across large scale factories and smaller producers the Prosciutto di San Daniele is cured using two ingredients: salt and air. Combined climates from the Adriatic Sea and Alps provide the distinct flavour of the ham. The quality of the ham is assessed by being penetrated with a pin made from a horse bone. This particular material is adept at absorbing the redolent aroma quickly enough for a scent-test before fading, ready for the next.

San Daniele hosts an annual street festival over a June weekend to celebrate and consume the ham.  Due to the nearby borders of Austria and Slovenia the 8, 000 resident town becomes awash with eager patrons of prosciutto. A favoured approach of consumption is wrapping each vanishingly thin slice around a breadstick. There are stalls at the festival ranging from salami from a variety of arcane animals, mountains of spices, an array of chutneys and liquors, and, incongruously, lavender stalls and memory foam mattress outlets.

Pig paraphernalia in every form is proudly displayed in shop windows: pig joint-shaped pillows, piglet ceramics, ham baubles, chopping boards carved into swine outlines. The list goes on and it’s quite bewildering. Patriotic pride in something as seemingly frivolous as prosciutto is bewildering and seldom experienced. While in Italy I consumed enough in a sitting that would normally be served as a canapÃƒÂ© between a dinner party of four in the UK. In light of this perhaps I’m biased, but nonetheless feel the exuberant display of pride for the ham is quite proportionate to its taste.

The festival attracts national attention and the opening ceremony met with jubilation and a sense of purpose. Long lenses belonging to the press protruded from the windows sun-faded houses. Live bands, in endearing earnest, slammed on electric guitars and banged their heads to 80s hits including Venus and Like a Virgin. The rapture lasted into the early hours as the steeples and panoramic views of the mountains faded into the shadows.

Pride, care and a fair amount of EU regulation create the copyrighted Grana Padano cheese and Prosciutto di San Daniele. Respect is due for continuing millennia-old practises and eschewing additives and preservatives. Both are made with risk and rigorous rules, but curing and Cazzaro aside, the greatest accomplishment is the flavour. Representatives of both consortiums exhort us to eat the respective labours of love alone to truly savour the taste. With that in mind, Grana Padano is best enjoyed with young, fresh, and light white wines such as Pinot Blanc. Whereas the sparkling wines such as Prosecco and Franciacorta, rosÃƒÂ© wines and young, very light and soft, low-in-tannin red wines.

For more information please contact shelley.george@cohnwolfe.com. Grana Padano and Prosciutto di San Daniele can be purchased in most major supermarkets and select delis, and enjoyed anywhere, in any meal.