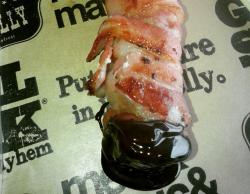 pretty lethal cocktail Ã¢â‚¬â€œ one which Zoe Perrett was only too happy to fall foul of.

As I take to the stage I’m fully aware I’ll have a lot of meat to beat, although I’m caught a little unawares by the speed with which first phallic object comes at me, and by the fact that it’s simultaneously sweet and salty.

But then, this is Grillstock, and a massive dose of ‘meat, music and mayhem’ is precisely why we’re all gathered here today. That curious sausage-shaped creation turns out to be a bacon-wrapped churro with a chocolate-Bourbon dipping sauce. It’s the first item I and my fellow King of the Grill judges are rating in the Jack Daniel’s Chefs’ Choice round. It’s… interesting.

As is the entire experience. I wouldn’t have considered it particularly compelling to watch a panel of greedy gannets stuff their faces with barbecue, but a growing crowd seems to disagree. Mind you, competition host Ray’Dr. BBQ’ Lampe doesn’t let us lapse into quiet contemplation. If you want to be on his panel, you better have something suitably entertaining to say about what you’re sampling. 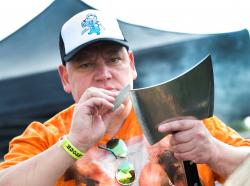 Beer and bottles of Jack Daniels are to hand to help us stay hydrated, and I rapidly realise I’ve sampled more alcohol than anything else. What’s more, my merry state is being slowly yet surely supplemented by the whisky present in each liquor-laced dish I tuck into. It’s 1.30pm. I’ve met the meat, I’m enjoying the music. I can’t wait for the mayhem.

But first there are a dozen more dishes to get down my gullet. Of course it’s compulsory to clean one’s palate with a good glug of beer or bourbon between each item. Or, in my case, a mixture of the two Ã¢â‚¬â€œ Brooklyn Lager topped up with Honey Jack Daniels. Try it; it’s awesome.

Almost as good is a crisp-shelled, gooey-centred chocolate bourbon pecan cake which causes the guy in the pig’s head t-shirt Ã¢â‚¬â€œ who happens to have brought a razor-sharp, axe-shaped blade onstage’in case anything needs carving’ Ã¢â‚¬â€œ to make the sort of noises you’d associate with pleasurable activities other than eating.

Having arrived with a hangover, I’m craving savoury, but we seem firmly stuck in a sweet spot. A skillet-smoked, meringue- 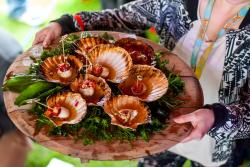 topped cake is followed by a roasted fruit-crowned coconut filled with rice pudding. What we don’t eat, we hand out to spectators who see off every last scrap.

Finally, I get to meet meat. There’s a decent fajita then pork belly hits our plates; first teamed with a sushi roll, then as a JD-lacquered slab with chicharones and a Bloody Mary on the side for good measure. The yolk of a gargantuan Scotch egg isn’t modishly runny, but whipped and piped – a devilled number we have a devil’s own job of getting our jaws around.

Then those jaws get a further workout with the delivery of some too-chewy steak that unfortunately follows a handsomely-treated ribeye roast, the latter served as a whole piece that has The Axe Man swiftly reaching for his tool.

Rather daintier is a single scallop-in-the-shell that comes doused with garlicky bourbon butter, and a paella whose nuanced smoked flavour is nothing short of triumphant. But, as a girl whose default demeanour of’subtle as a brick’, my own heart belongs to a sloppy 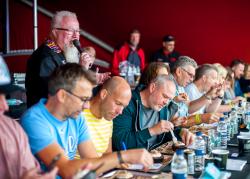 hunk of a bread roll stuffed with meat, cheese, and quite possibly a light drizzle of sheer heaven.

It’s a tasty way to mark the end of my career as a barbecue guru. Acting in the manner of a foolish flesh-phobe, I’ve only signed up to score one round. But as soon as Dr. BBQ takes me under his wing and appoints me assistant bar-back, I’m back on stage faster than a meat-seeking missile; ensuring that the judges are kept well-watered and that I get a hasty taste of a good few burgers, then spice-doused chicken wings. I also make a new acquaintance of Dr. Sweet Smoke; a big-eating, smooth-talking operator who’s both a’cue expert and a down-home, downright dirty dog.

And he’s a downright excellent shot; as any audience member who catches one of the many parcels of extra hot wings that we toss crowd-wards during the final round of King of the Grill would attest. Having tentatively tasted a few, I’m not sure the recipients should be quite so gleeful. Hot? I’m surprised some of these wings don’t burn their way through the paper. After a particularly incendiary mouthful, it’s clear there’s only one thing for it: I think I’ll have another beer. 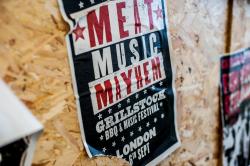 I remember an Elvis impersonator. I remember some guys at a grill pit feeding me a chicken wing so hot I thought I’d died and descended into hell. I remember, with anguish, that I missed the Fun Lovin’ Criminals. I don’t remember who was crowned King of the Grill. Everything after 7pm is forgotten. Next year I’ll remember to pace myself. Maybe.

Grillstock returns to the UK next year, bringing meat, music and mayhem to locations around the country. grillstock.co.uk