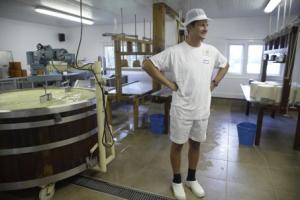 If Nick the Ed has let me get away with those made-up words, I shall continue. Grooey, thighswellingly… So off to Kent we went, but not before popping into Harvey Nichols’ terrace at the OXO Tower Restaurant.

The idea of Handpicked is that head chef Jeremy Bloor from Harvey Nick’s OXO restaurant takes us to one of his suppliers, in this case, his cheese one. Then we eat a locally sourced al fresco lunch in a field with a load of random strangers. So we headed off across the stunning North Downs to Winterdale Farm in Sevenoaks where farmer Robin Betts makes his Winterdale cheddar. Despite the glut of blonde ladies who lunch (me: jeans ‘n’ trainers), it was actually lots of fun.

First Betts showed us his cheese dairy where he makes the award-winning Winterdale Shaw, a hard cheddar, as well as an oak-smoked version. We had to sign a form declaring we’d not got the lurgy before we ventured in – no coughs or splutters allowed. As we entered we were engulfed amniotically by the smell of warm milk. They use large kegs with rakes that stroke the milk as it is warmed. The milk doesn’t need much energy to be warmed as it comes fresh from his herd of 200 Friesians. It’s in the vat from the udder within five minutes, no longer than 20.

After the curds are separated from the whey, they press the cheese into moulds using the artisanal wooden cheese presses. This takes three days. Having been wrapped in cotton muslin, they are then lowered into a nifty, chalky cave, the truckles lined up on benches. After a couple of months, the cotton covers have bloomed into wonderful furs of pink, lime green and white mould. After ten months – when the cheese is mature – these colours have themselves settled into rusty browns. 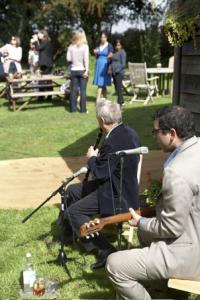 Back out of the cave to our al fresco lunch. This was at a long banquet table in the field under a marquee facing an open valley that dipped into a copse of Kent oaks and popped up the other side with Freisians grazing. Not only that, we had an odd couple duo serenading us with lovely blues and jazz, the older guy envigoured by his clarinet. Idyllic huh?

Starting with a chilled pea soup with summer truffle was a good call as it was excellent. Very pretty pea shoots shot their tendrils around the grainy soup whose delicacy was not marred by summer truffle, which tends to be light.

Then we were brought corn fed chicken breast stuffed with spinach, baby vegetables and squash flower with cep and cream sauce, the latter binding the dish beautifully. The chicken, sadly, was a touch pappy but the baby vegetables were stunning, I’ve not had such tasty courgette for years. And there was a lovely citrussy fig dressing on our baby leaf and chervil salad, again, from a farm down the road.

We were drinking local Kent wine and the Biddenden Ortega 2009 was very nice, swirly and appley. Of course there was a cheeseboard with said cheese which was very good – the flavour of the young cheddar blooming on the tongue into grassy, creamy notes after a few seconds. Best, we thought, were Bloor’s gorgeous crumbly rosemary biscuits made using the Winterdale cheese.

I secretly ordered two glamourpusses to purloin a few from the next table and sure enough, the little minxes did my bidding as I grinned like a Cheshire cat with the cheddar as, like the glutton I hope I’m not, I gannetted them.

Editor’s note: The use of made-up words is not normal Foodepedia policy. Is that comprehenderised?