A celeb chef putting his or her name to a kitchen appliance is not that unusual or surprising. The money is probably very good, the effort required pretty minimal and it certainly beats sweating over a hot stove all day. Walk around John Lewis and it’s almost an A-Z of chefs, George Foreman excepted of course. But, as the marketing people no doubt say, when Heston Blumenthal puts his name to a product it has to be good. 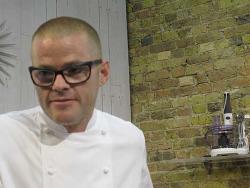 The man is, as we know, devoted to the idea that great dishes can be created not just by wild-haired ego maniacs flying by the seat of their pants, but also by cold calculation and the appliance of science. The best boiled egg can be cooked not by simply boiling water and rough timing, but by the water being at a precise temperature with the time measured on a stopwatch. The result is consistent perfection and that is what HB is very good at. 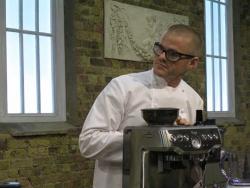 And Heston has never been against mechanical help. It may be good for the soul to cream butter by hand, and good for the biceps too, but if a machine can do a job better, quicker and without supervision, the chef has more time for the important creative stuff.

Which leads us to why despite it being a wednesday, we are in the Saturday Kitchen. SageÃ¢â€žÂ¢ kitchen appliances hail from Australia and are things of beauty. More importantly each of the 16 machines in the range that’s being shown has benefitted from Heston’s input, experience and common sense and now, as the Sage Ice Cream maker churns in the background and we all keep a nervous eye out for James Martin who has his own range of appliances, Heston explains and demonstrates each one. 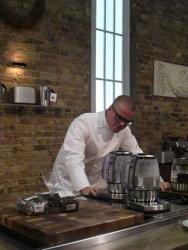 So a kettle is just a kettle right? Well no, even this piece of basic kit can be improved. Brewing too hot or for too long pulls tannins from the tea leaf, Heston explains, which results in a bitter aftertaste.  So together with Sage he had a look at the classic kettle and produced a Tea Maker. 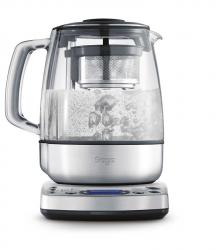 Simply select your chosen tea type and once the perfect temperature is achieved the leaves are automatically lowered into the water (which is a very cool thing to watch actually) and then after brewing brought back up again, to produce the perfect brew by blend.

Because the leaves come out of the water, the tea can stay hot in the kettle without brewing any further. And for those of us who like a lie in, the Tea MakerÃ¢â€žÂ¢ has a programmable’start’ feature so you can wake up to a fresh brew every day.

Heston missed his vocation as an in-store demonstrator, his flow of patter, jokes and information would have made him ideal. Even as we taste the tea he’s already into the next gadget – a blender. Now we all know blenders can be irritatingly inefficient, most work only by sucking ingredients down toward the blades but this can leave some bits of denser ingredients like sugar or honey unblended. 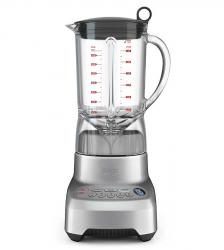 The SageÃ¢â€žÂ¢ KinetixÃ¢â€žÂ¢ Control solves the problem. Centred crushing blades suck ingredients downwards, whilst long curved sweeping blades scrape the bottom of the concave bowl. This minimises food traps and pushes denser ingredients up. The result is that nothing gets missed. The jug itself is plastic, so it’s nice and light, and Heston’s chunky assistant stands on it to prove it’s tough.

The demos go on with the 3.7 Litre combined searing slow cooker, rice cooker and steamer that pulses heat around the base and so can actually cook a risotto without it being watched. Heston explains that contrary to lore you don’t actually need to constantly stir a risotto and the dish he produces is indeed perfect with the pleasing acidity that is such a trademark of Heston’s cooking. 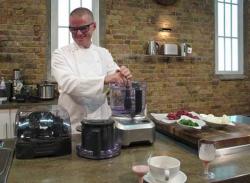 He gets out a food processor, or as Sage call it the Kitchen Wizz Pro. This can mandolin your veg with 24 thickness settings, from 0.5 to 8mm thick. The extra-wide Big Mouth food chute allows you to put larger or longer food in and all the slicer, julienne, chipper, reversible shredder discs and whisk accessories come in a smart box.

Particularly cool is the double decker blade for mincing meat, which has its own special cover for keeping it safe from small hands and harm in the dishwasher, and the small processing bowl for smaller tasks which sits inside the larger bowl during use. That’s smart thinking.

The instructions and recipes come with hints and tips from Heston, who is by now enthusing over a toaster. It is indeed quite a toaster. Different breads require different amounts of cooking time – sweeter breads cook quicker. The setting times on some toasters will under or over toast depending on the bread. They also leave you guessing when it’s done. The SageÃ¢â€žÂ¢ Smart ToastÃ¢â€žÂ¢ has a silent motor that lifts the toast up enough to check how your toast is getting on without interrupting the heating cycle. 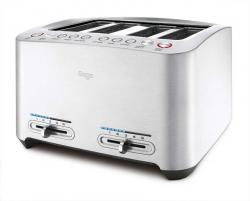 If the bread needs a little more browning you press the classic Aussie-named’A Bit MoreÃ¢â€žÂ¢’ button. The bread rises and falls and Heston looks on wearing his happy child face; as the only man there I share his enjoyment, much to femal bafflement, and we find we both also share a fascination with opening and closing the DVD/CD trays of machines in stores. 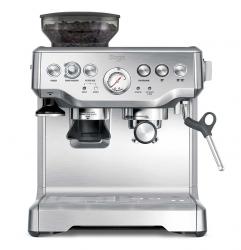 Heston then juices with the SageÃ¢â€žÂ¢ Nutri JuicerÃ¢â€žÂ¢ Pro  that only transfers two degrees of heat which means, as he explains, that each glass of juice has the maximum nutritional value as well as taste. 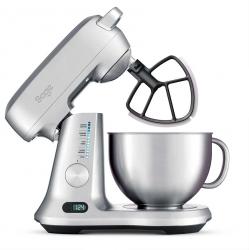 There is no doubt that all the Sage kit is verywell designed and both elegantly sturdily built and deserving of the high price tags. The features are all carefully thought through benefits, not gimmicks, and things like the SageÃ¢â€žÂ¢ Scraper Mixer ProÃ¢â€žÂ¢ with its clever’windscreen wiper’, which wipes the sides and bottom of the bowl to achieve 360° bowl coverage with every turn. This is absolutely the thing for budding bakers who want the best and  is, dare we say, even better than a certain iconic retro styled brand that seems to feature on every cookery show on TV.

If you’re into kitchen cool as well as the appliance of science for perfect results, these chef designed and endorsed gadgets from Sage really are the business. They make not make you Fat Duck perfect, but they’ll make everyday life a little smarter.

By Foodepedia22 May 2013Articles