Swirls of vivid colour, squeals of laughter, delectable Indian treats and heavenly cocktails can only mean one thing; the House of Holi is back! For the uninitiated, Holi is the Indian festival of colour, when families celebrate the arrival of spring by covering each other in brightly coloured handfuls of powdered paint Ã¢â‚¬â€œ and very welcome it is too in a chilly, not-quite-spring London. Amy becomes a person of colour

Having long been a fan of the charming and talented Vivek Singh, I was excited at the chance to celebrate the festival at his city outpost Cinnamon Kitchen Ã¢â‚¬â€œ although I’ll admit to trepidation on approaching the venue, and sudden regret at the fairly important meeting I had later that day. 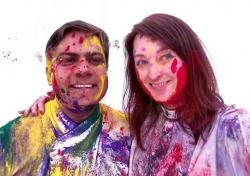 A couple of potent Neela Heera cocktails (and some delicious traditional Holi canapÃƒÂ©s) put any nerves to bed and after donning white, protective PJ-type overalls, into the pod we went! The proposed’no face rule’ promptly went out of the window as clouds of beautifully coloured powder paint flew through the air.

Within minutes everyone was coated in sprays and splodges, in hair, eyes and mouths, covering anyone close from top to toe. The powder tastes and smells oddly pleasant, so no hardship, just lots of fun. 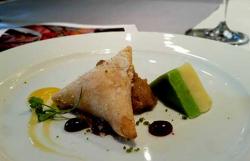 Vivek got very much involved, personally making sure all participants were daubed with each and every colour. We continued like this until all the paint was gone, then engaged in a futile attempt to clean up with some baby wipes Ã¢â‚¬â€œ almost wholly unsuccessful in my case. Following mild panic when Vivek then joked we weren’t allowed in the restaurant, (thank God it was a joke) we sat down for lunch.

I’m fortunate enough to have dined at Cinnamon Kitchen a couple of times before and the Holi lunch surpassed all expectations. Grilled Kentish lamb escalopes were tender and gorgeously spicy served with a fresh paprika raita (try saying that after a few Neela Heeras).  The main was king prawn coconut curry which was creamy and comforting with huge, juicy prawns, ghee rice and a side of rich daal.  A sweet carrot samosa with fig-semolina halwa was up next followed by coffee and petit-fours to finish.

It really is a great event to take part in and very reasonably priced Ã¢â‚¬â€œ just be careful which meetings you arrange for the rest of the day.