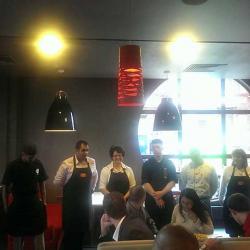 I’ve always fancied myself as a judge on a cookery show. I don’t know whether I’d be the pompous one with the obviously dyed hair, the old geezer wishing it was still 1960 or one of the women with a posh accent and dead eyes.

However the call  has not yet come. Working on the basis that one has to start somewhere though, I accepted the request to judge for Accor as they decided a’signature’ dish for their Ibis  hotels.

As a morale builder and bit of fun, Ibis had run a competition to all their outlets to find a dish they could put on the menu of just about every hotel. The competitors are not super chefs, it’s part of their job but not all of it. The dish had to be simple enough for everyone to make in scantily equipped kitchens, cost effective and one that customers would go for.

So after a brief handshake with fellow judges, it was on to the raised platform of my dreams. Would I be Mr Nasty? Would I be soft and cuddly? Would I be feeling sick by the end of the evening? Dishes were to be judged on the story behind them, presentation, ease of repeatability, cost etc

It’s up to you New York 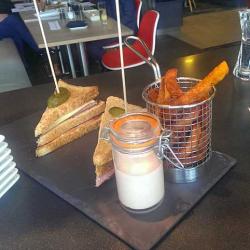 The first competitor was on holiday so his manager was making his dish for him. On a kitchen monitor we saw him toast bread and construct a’New York deli sandwich’. It looked a lot like me trying to make breakfast at home while running late. Presented to us it was reasonable, apart from the sliced bread used, and it didn’t taste too bad. A bit of a no brainer though.

Not so hot peppers

Even less of a brainer was the next dish, sweet peppers filled with chili and microwaved. Even the chili was, as the breakdown showed, bought in. Chef’s contribution was to press the’on’ button. It was as uninspiring to eat as you might imagine. 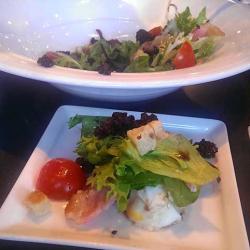 Next up was’Darren’s Brunch Salad’ with the eponymous Darren constructing a salad of mixed leaves, black pudding, bacon, croutons, cherry tomatoes, balsamic vinegar and, rather cunning trick this I thought, sugar looted from the sachets for tea and coffee.

It looked pretty good; the dressing was sharp and sticky, the bacon a bit underdone. The poached egg was a readymade, microwaved and apart from its peculiar square shape, not bad at all. Well done Darren.

Fish out of water 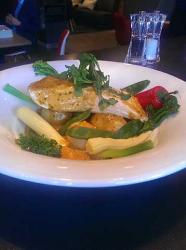 Then came for me the obvious winner. Presented by its creator, a nice lady who was totally tongue tied with nerves Cajun Spiced Salmon looked very much like a dish someone might want to eat. A good mixture of vegetables, salmon well cooked (in a microwave and why not?) and a creamy spicy sauce. It was tasty and I would have paid the £10.50 suggested price.

Yhe next dish,Fogg’s Jamaican Experience, a dish of jerk chicken, lime and coriander yoghurt, bell peppers and flatbread was not bad at all but was simply too complicated to ever work on the menu. Too much marinating, too many ingredients. 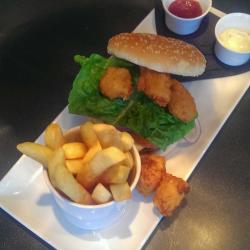 And finally a surf n turf burger, basically a burger with scampi and oven chips. This was a goodish idea, everyone loves burgers and scampis, but the microwaved burger would have reduced a food blogger to tears. It was that bad. On the plus side the scampi were well cooked and I am a bit of a sucker for scampi.

So we retired to come to a verdict. The salmon won easily and despite my reservations, the experts picked the New York Deli Sandwich as runner up.  The winners get a training programme with the head chef of the Sofitel St. James Hotel and some glory. They deserved it.

The Cajun Salmon will also be on menus from mid October