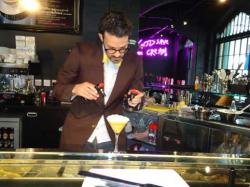 Growing in fame and popularity The Icecreamists, have recently launched their new flagship store in Covent Garden. Their first store is now known as the ‘testing kitchen’. As I walk by and peer into the windows I see a dark interior with hospital drip bags on display, filled with what I can only assume is not human fluid but instead various alcohols. Although slightly eerie, it poses the question, is this ice cream rehab?

The flagship store, is not too far off, the skull and cross bone Union Jack flag in their signature colour of neon pink creates added mystery around the store, is it really just ice cream they are selling? A creating session meant I would soon find out. 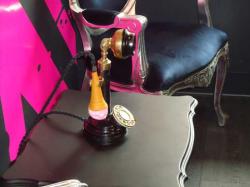 Inside a pop culture theme creates a playful atmosphere with plastic ice creams dotted around the store and splattered over CCTV cameras, and larger than life lolly sticks with trickles of dried paint acting as melted ice. An old phone sits at the entrance with an ice cream as the earpiece, it doesn’t get much quirkier than this.

Although still in a legal battle with Lady Gaga over the title given to the human breast milk ice cream – Baby Gaga, they still manage to churn out some of the most deliciously enticing ice creams. The new store will feature a brand new rotating menu (with the possibility of human breast milk ice cream making a come back) and over the next couple of months will incorporate new products to ‘test’ out their popularity. Owner and rebel Matt O’Conner informs me that amongst the products to test out they are currently thinking of working on the most calorific ice cream yet. 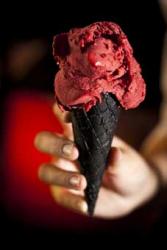 With treats such as the new jet black ice cream cones, this is fashionable ice cream. Even the staff are dressed as sexy ice cream police, in PVC and all. Known as the ‘agents of cool’ their job is to ‘liberate the world one lick at a time’ with their cooler than cool ice cream. Delights such as ‘toast mortem’, although grim sounding is an upgraded alternative to a ‘Nutella on toast’ breakfast consisting off toasted panettone topped with chocolate ice cream whipped with hazelnut liqueur. As seductive as it sounds, this little treat will set you back £8.95.

The décor is most certainly entertaining and as I make my way upstairs to the ‘lounge area’ I am met with portraits of ‘Cone -l Gaddafi’ and a partially naked Kate Middleton with the phrase ‘Two scoops?’ plastered across her midriff. This place certainly has a sense of humour about it.

The creating experience was an enjoyable one. Being able to watch how such tasty ice cream cocktails are whipped up with unconventional ingredients such as chillies, added to the eccentric attitude of the place, no other ice cream parlour does wacky like they do. Who else makes ice cream cocktails with balsamic vinegar and a blowtorch? People who are extreme about ice cream, that’s who. 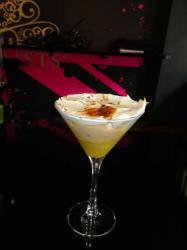 Being able to test the recipes out really reinforced the effort and originality that had gone into creating them. These people truly are ice cream extremists. Taking old Italian tradition and recipes for ice cream and transforming them into a palatable experience using unusual ingredients to add a modern twist. The whole ethos behind The Icecreamists is to be different and shock the world into ice cream therapy, it is about creating an atmosphere in which to love ice cream.

By Foodepedia15 May 2011Articles