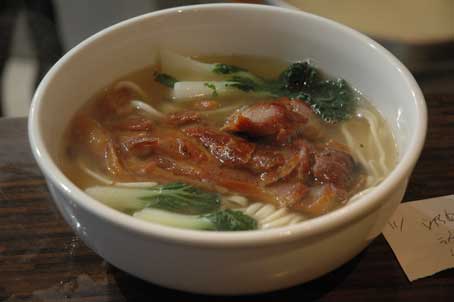 Gordon Ramsay has memorably pulled a noodle, as we now know of course, but today is my chance to try my hand at this genuinely ancient art. Teddy K.C Chen a Director of Inn Noodle confirms the noodle’s long history while letting a small grin crack his otherwise stern face, ‘Italians think they invented pasta and spaghetti, huh? Stolen from Chinese!”

We’re at Inn Noodle in Oxford Street, just a Dim Sum throw from Tottenham Court Road tube, one of three noodle restaurants that Teddy and his partners run.Despite its location, surrounded by rubbish fast food joints, this is the real Chinatown deal right down to the steamy plate glass window that faces the street. Here Chef Fei Wang does his remarkable, theatrical stuff creating fresh noodles from dough in seconds. These he then drops into boiling stock to create a range of delicious Shanghainese noodle soups and dishes that are swiftly swallowed down by a clientele of Chinese expats and savvy Western diners, all looking for really authentic food at more than fair prices. 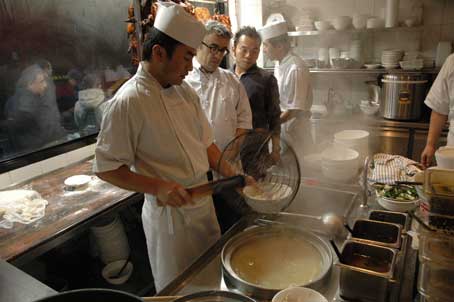 Making a lot of dough

‘We go through about 30kg of noodles a day,” chef tells me through an interpreter. Having spent ten years perfecting his skills in China before being brought direct to London, Fei’s Mandarin is better than his English. Behind him is an industrial strength mixer stirring and kneading the mixture that makes the initial noodle dough. ‘Oh just flour and water, you know,” says the interpreter airily, having got a response to my question about ingredients. I think there’s a bit more to it than that, but judging from chef’s face it’s all I’m going to get out of him. Like the Colonel, he has his secrets and proportions are one of them. He does however cheerfully confirm that there are no preservatives in his noodles.

La Mian, or pulled noodles are a dying art in their home of Northwest China and Lanzhou in Gansu Province he explains. So many places simply use dried or fresh from a factory in chilled bags. The texture and the taste are simply not the same; he shakes his head sadly contemplating the folly of frozen and dried. His dough once through the mixing machine is lifted in a quivering massive lump to his workstation in front of the street-facing window and ducking to avoid the Beijing ducks flying above his head, he takes a large lump to begin the first part of the creative process, the kneading. 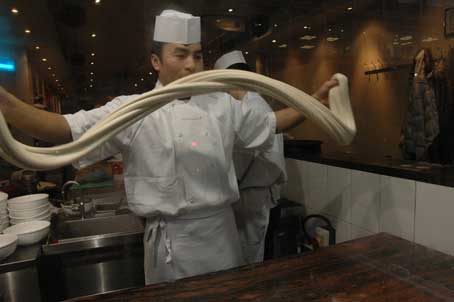 Toss it, twirl it, taste it

The dough is stretched out between his hands, flipped and twisted and flung into the air where it is looped and stretched again before coming magically back down into his hands. The braid of dough is folded over itself and the process repeated with chef performing ever more elaborate patterns in the air as passers-by scramble for mobile phones to take his picture. Like a pizza chef he loves the theatre of what he does, flinging the dough up almost to the ceiling before twizzling it down again. And like a pizza dough this performance is absolutely necessary because it is this kneading process that changes the dough by working the glutens in the flour. Only a chef with his years of experience and passion knows when the dough is correct for the next part though and only when he is happy is the dough chopped into chunks about thirty centimetres long by ten wide and lightly covered with cling film to keep from drying out. 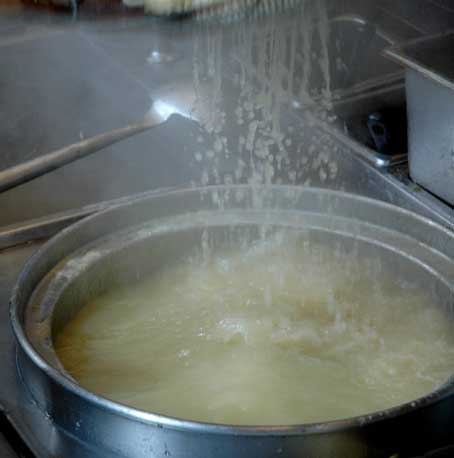 There isn’t much chance of that because orders come in thick and fast. Once chef gets the request he hand rolls out the chunk on his lightly floured work place to about fifty centimetres long and one thick and then with the lightest of touches and corrections he ensures it’s uniform all the way along. Picking up one end he joins the two ends together in his left palm, separating the two strands with his middle finger. The he grabs the looped end with his right hand brings it to his left to create four strands and then stretches them out and does it again. And again. And again, pausing only to flick the ever increasing and thinner strands into the flour to keep them from sticking. Suddenly he is holding a cats’ cradle of perfect noodle strands about two millimetres thick and he turns and drops them into the boiling water for thirty seconds before draining them into a bowl where he adds the hot stock and all the ingredients of the customer’s chosen dish. It simply could not be fresher. 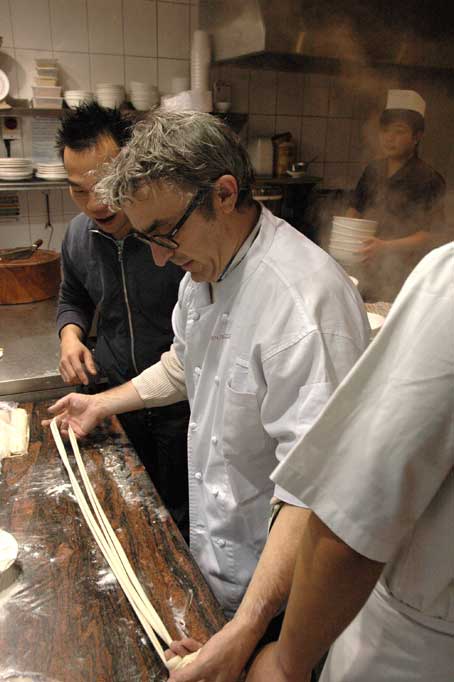 Make way for the expert

Now it’s my turn to try. Chef is indicating that I should scrub my hands and then put on the chef jacket he has thoughtfully provided. It’s a bit late for that as I am already covered in indelible stains from slurping a bowl of noodles earlier but I do like dressing up. The other chefs chopping their duck and tending the Dim Sum steamer all look a bit worried at my appearance in their world but cheerfully stand aside to let me take my place at the big window. I take a piece of dough and roll it out with my hands just like plasticine worms at kindergarten, but mine wont roll evenly; it’s thin here and thick there and instead of being round has flat spots. Chef corrects most of the imperfections with a few deft moves and then I try the looping bit. It takes a few moments to get the ends sorted out, and the dough feels curiously alive and springy, but then I do a pull and suddenly I have some noodles, albeit very thick ones, we loop and pull again and some drop away and break but they are becoming a bit more like the real thing. A couple more pulls and I have a decent number. Chef beams his approval then scrunches them up and tosses them into the bin. Ah well. Orders are piling up and I slip back to the side of the counter where I truly belong, as chef gets busy with his cats’ cradles of noodles once more.

Inn Noodle here in Oxford Street, in Queensway and now in Chinatown too is probably the only place in London where you can eat hand-pulled fresh noodles as well as excellent and authentic Dim Sum. The taste is unique and the price is right, so treat yourself to a bowl of authenticity and while you’re at it watch a master craftsman at work.