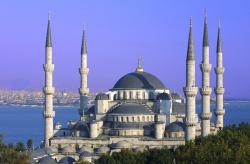 Like no other jilted capital Istanbul engulfs visitors with its razzled charms, the musk of rose petal tinged with rancid fish-heads the prelude to your renewed affections. Important things have happened in this city of minarets; here the past isn’t so much a passive resident but a restless dervish whirling down the backstreets off Taxsim square, where men smoke the hookah and sip coffee as thick and loamy as compost.

Smoke from a hundred-thousand car exhausts breathes a black patina over Ottoman porticos, stiffening the coats of street-urchin cats so that they look permanently electrified; backlit by sunlight it hangs in a shimmering miasma above the Bosporus, Black Sea Strait, gateway to the East and home to tribes of cannibal jellyfish.

Strung out along the Galata Bridge, fishermen pack their catch in glass bell-jars, layer upon silvery layer circled by marauding seagulls. Under the arches, horse mackerel, mullet, and turbot are blistered under a hot grill and served with plump grains of sticky, milky rice and a lemony salad. The people of Istanbul enjoy seafood so much they have a popular saying: “If I caught my father in the sea I’d eat him.”

Sweet and juicy mussels are a popular street food, stuffed with herby tomato rice it’s an inverted kind of paella served in the shell. Another street vendor will sell sweet corn-cobs caramelised over hot coals or chewy discs of sesame-topped bread. Bread is close to a Turks heart; they will inhale the scent from a bakery as though it was the sweetest perfume. Sometimes a little salty feta is pressed into the dense, cackey crumb, sometimes chopped black olives or chilli. 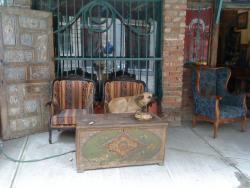 Istanbul smells vital and ancient – a good burnished smell like the sepia pages of well-thumbed books – and the sky, a vast screen of perpetual special effects, shows a beautiful apricot lustre at dawn tinged with rose pink at dusk when the city is aglow with residual warmth.

Breakfast involves eggs of some variety, from simple hard-boiled to more elaborate concoctions like menemen, scrambled eggs cooked with peppers, chilli and oil. Olives, cucumber and tomato will also be on offer, as will sheep’s or goat’s milk cheeses and sweet rose-petal syrup for spreading on fresh bread. Fassoulia is a popular breakfast dish made from sliced green beans stewed until silky soft with olive oil, tomato and garlic. It is usually served cold while a hot version made with creamy cannellini beans is served throughout the day.

Like Venice and Naples, Istanbul is a city that speaks to the individual; some will remember the tranquil beauty of the Blue Mosque, others the Grand Bazaar with its fiendish traders who barter with guillotine precision, never missing their mark, but for me Istanbul is at its most evocative when approached by water. Each daily crossing of the Bosporus on a shaky ferry brings a closer, territorial intimacy as you imagine an alternative existence moving about the vast city as a native, at home with the striking exoticism.

When I think of the customary rituals of a city where it is possible to feel fully occupied while doing nothing much, I think of the call to prayer, that archaic swell that seems to come from the mouth of the city itself, a floating layer of sound that levels everyone to listeners. I think of miniature glasses of hot, sweet tea grasped between forefinger and thumb and tumblers of anise flavoured raki turned cloud-coloured with a splash of water. 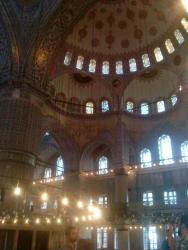 The wide shopping avenues off Taxsim square are lined with designer shops, but wonder down the side streets into a network of vintage stores piled high with typewriters, leather trunks, birdcages and retro ephemera. Turks have a sharp eye for fashions and the days of picking up a real bargain are no more, but the narrow, ornamented buildings falling into gentle dilapidation come close to the heart of old Istanbul. Here you can listen to live gypsy fasil music, while Arabic cafes serve food with a Moorish twist such as spiced and cured meats sujuk and pastirma; salt-roasted pumpkin seeds and lupini beans; and a molten mixture of stringy cheese mixed with cornmeal that’s eaten like a fondue.

Istanbul also has a well-established tradition of European-style coffeehouses, many specialising in wobbly milk puddings and the famous baklava – a ground paste of nuts sandwiched between layers of butter-brushed filo and drenched in rose syrup. My favourite baklava is baked in a flat sausage spiral, the creamed pistachio showing bud-green through the thinnest layer of translucent pastry. Another speciality dessert is kunefe, served from a hot pan it has a crunchy texture like shredded wheat with a filling of sweetened cream cheese, the dessert is finished with hot syrup and chopped nuts. Fruits platters feature apricots, green plumbs, figs, cherries and doote (white mulberry), while chunks of watermelon are traditionally served with cheese.

The city has its own version of fast food restaurants, dishing up traditional food from school-dinner style canteens. These restaurants specialise in stews, stuffed vegetables such as artichoke and aubergine and the Turkish soup known as chorba, made from stock and lentils and served with a squirt of lemon. Dolma – rice-stuffed vine leaves – is very popular, and manti, tiny meat-filled dumplings covered in a yoghurt sauce, are another local favourite. 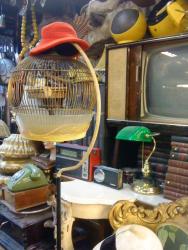 Unlike the clods of suspiciously perspiring meat common to the UK, the doner kebab is a Turkish speciality and is usually eaten from large oval plates in seated restaurants; thin slices of spit-roast chicken or beef are placed atop chopped bread and covered in spicy tomato sauce, fresh yoghurt and olive oil. Because kebabs are usually served with hot pickles, Ayran is sold to counter the chilli burn. Ayran is a natural yoghurt drink thinned with water and a pinch of salt; it is to Turks what gazpacho is to the Spanish.

Four times an imperial capital (Roman, Byzantine, Latin and Ottoman) the city retains an aura of great power, its ancient palaces and mosques set amongst parks landscaped with tropical flowers and neo-classical fountains. Despite the awesome antiquity Istanbul is a very hip city, not least because of its hybrid Eurasian character which puts it at the forefront of internationalism. New money is much in evidence and the city hosts many international events such as the star-studded Istancool festival, now in its second year.

Never-the-less, Istanbul doesn’t easily concede to commercial tourism. This is a complex metropolis and the sometimes grimy patina is as much a part of its romance as the Topkapi palace. The city’s irreverent character can express itself in wily ways; in a rancid gust from an ancient drain or in the gold-toothed smile that invites you to browse without buying. Even the mosques reflecting white sunlight off their space-age aluminium domes can catch you off-guard. Over 10,000,000 people pulsate throughout this megacity and the unhurried bustle is neither threatening nor entirely benign, creating an atmosphere of imminent possibility and a feeling of having arrived right at the very centre of things.

For stuffed mussels and fish walk along the Bosporus and under the arches of the Galata bridge.

For European style restaurants and rooftop views of the city, Galata District