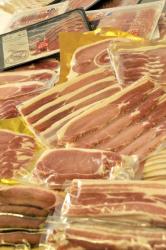 You know what, our editor’s a pretty decent bloke. Usually I’ll brighten up a dull day by searching through Youtube for people falling over or ringing my mate Deadman at work and playing 80s power ballads down the phone. Though on this particular day, as if my porky little peepers were playing tricks on me, in drops an email from the gaffer with a job of judging bacon.

Oh yes…judging…bacon. It has to be up there with the world’s top jobs, like video game testing or playing up front for Villa. Plus, how hard can it possibly be? Bacon is bacon, right? Wrong. Actually you’re right, but there’s more to it than that, so you’re wrong.

The power of bacon should not be underestimated. Cooking it releases an intense odour that has the ability to kill off the most horrific human hangover. In fact, the overwhelming inducement of continuous cooked, crispy bacon even convinced me that going to Telford was something to relish.

If I were to quote Mr Balboa, ‘the world aint all sunshine and rainbows” for the modern day British pig farmer. Years ago Britain banned the inhumane conditions to which British pigs were accustomed, allowing the animals a better standard of life. Imagine the battery chicken vs free-range chicken debate that was so highly publicised and apply it to piggies. It’s not only kinder to our porky pals but it also results in better quality meat.

Unfortunately, Europe failed to follow suit and still allows pig farmers outside of Britain to keep their swine in conditions that not even stag parties would choose. Then, to make matters worse for the British pig farmer, it’s still NOT illegal for companies in Britain to import pig meat from the continent. Doesn’t sound fair does it? Probably one good reason for that, it’s not.

So how can you tell that a product that comes from a British farmer and that’s from a high standard of welfare? Luckily for us there’s a symbol that signifies this, a red tractor. I suppose it’s like looking for the Lion mark on eggs. Not only will you be eating a product that’s guaranteed from a British farmer and had a higher quality of life; you will also be eating a better quality product.

Hopefully by now you’ll be starting to understand why bacon isn’t simply just bacon. The only choices I used to have with bacon were white or brown bread, followed by Daddies sauce or Ketchup – but my eyes had been opened by Tina from BPEX (British Pig Executives). A remarkable and impressive lady that knows her bacon inside out, although she does prefer brown sauce to Daddies and calls ketchup ‘tomato sauce”, but we’re not all perfect.

Tina also happened to be my judging partner, or Baconista, for the day and lead me through possibly one of the greatest experiences of my life. Plate after plate of anonymous bacon landed on our desk with a brief description of the process by which it had been cured. The bacon undergoes a sort of beauty pageant judgement first in its raw state, showing off its pink and white bits, then follows a second judging by eating a cooked version.

Ok, that’s a lot of information, just what do I mean by the way in which it had been cured? Traditionally it’s obvious, curing is done with salt, sugar or smoke…yet these days there are even more. Producers are coming up with more and more extra ingredients to throw into the curing process to leave a characteristically unique taste to their bacon.

I can’t possibly write about every single type of bacon that I judged, well I could but I’m not going to, but I will mention a few rather unusual ones. For example, I wager that a large majority of Foodepedia readers will not have sampled lemon and lime bacon, which had a sweet marmalade taste to it. For those who like a heavier taste the stout soaked bacon is a stronger, darker flavour. Though if you really want a boozey bacon bite, I’d definitely opt for the navy rum soaked bacon.

Throughout the day we managed to get through over 150 different bacon entries. It’s opened my eyes to understanding what I’m looking for in bacon, in terms of texture, taste, flavour, source and cut. Highlight of the event? I finally found out what those little white bits are in the pan when you fry bacon!

Bacon Connoisseurs Week is scheduled March 19th – March 25th, during which the winners of the Rashernal Treasure Award and the Red White and Bacon Award will be announced. If you would like more information then please visit www.lovepork.co.uk