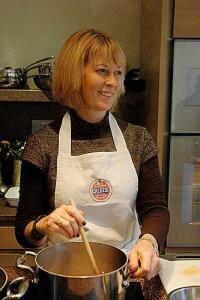 Katie Caldesi is peeling an orange. Normally when people do that in front of me, especially on trains, I move away muttering darkly about lack of respect for others, but this is remarkable. She slices off the skin all around, cuts between a segment and without pausing turns the knife so that she comes back the other way. The segment drops off neatly and the membrane between is left still attached to the fruit. By the time she finishes the remaining orange look like a Rolodex.

I’m watching Katie prepare some dishes from her new book The Italian Cookery Course: 400 Authentic Regional Recipes and 40 Masterclasses on Technique in the teaching kitchen at Caldesi in Marylebone. Husband Giancarlo has popped his head in briefly but has gone to a meeting. I ask Katie how it feels to be writing a cookbook when her husband is a famous chef. ‘Well Giancarlo isn’t a natural writer and he hasn’t got the patience to sit down and write books,’ she explains. ‘I have actually done the co-writing on the previous books of recipes we have brought out. On the book of his mother’s cooking I interviewed him for his memories. With the second one it was recipes we had developed together. I like writing and it seemed natural for me to do the third one. This time I’ve also sourced the recipes too, so it’s entirely my book, the result of over three years looking and listening and eating.’ She has travelled extensively, as the title suggests, ‘back and forth to Italy, seeing parts I had never been to before, meeting fantastic chefs, cooks and producers and learning from them,’ she says, as she places the orange segments around fish on wooden skewers – tuna, salmon, monkfish and prawns. ‘Orange I find so much nicer than lemon, it doesn’t cook the fish as it marinades and it isn’t so assertive.’ 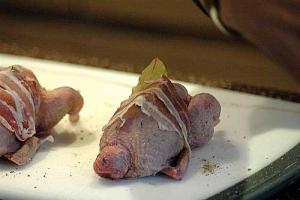 Two quails are on the chopping board ready to be trussed. As Katie twirls string and pulls the birds into neat shapes she explains that the technique, which like the orange slicing, seems as easy as breathing to her, is explained fully and with photos in the book. ‘It is a cookery course,’ she says patting a quail’s rump affectionately, ‘not simply a book of recipes.’ The birds go into a hot pan where they sizzle and jump. ‘I learnt from our chefs here a while back that food should be seared almost to the burning point, that onions, for example, should be properly browned. I was guilty, I think a lot of people are, of being timid and impatient and not getting the important first stage done right, so much flavour comes from that. The other thing I have learnt is courage in seasoning, that’s so vital.’

While she has been making our fish starter, a pan of water containing nothing more intricate than an onion, carrots, bay leaf, peppercorns and celery sticks has been simmering away. This will be the stock for the quails and also for the mushroom risotto to go with them. ‘Celery I think is the key ingredient, ‘Katie muses, giving it all a stir while I peer in and instantly steam up my glasses, ‘it has that special aroma and unique flavour.’ 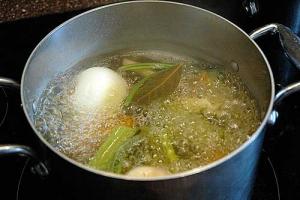 Flavour, honesty, it’s what’s Italian food’s all about. Michelin stars don’t often come the way of Italian restaurants because the food simply does not make use of complication or fancy presentation. ‘Italian restaurants that do get Michelin stars seem to do it by almost mutating into a kind of French restaurant,’ Katie says looking around for the removable control knob for her induction hob.’ Italian food doesn’t ‘present’ well and it’s not supposed to. I mean in Italy sauce is not cooked separately to the meat, you can’t have a ‘sauce section’ in the kitchen. Oh you can load up the dish with expensive ingredients, but no matter how much truffle you shave on the pasta it’s still pasta with truffle. Simple. That’s the way the food is.’

The quail is now well browned and wine is added to the pot with a tremendous sizzle that has us all jumping back. Once almost all evaporated, some stock is poured in, the lid put back on and the birds left to cook for an hour. ‘It’s one of my favourite dishes,’ Katie says, ‘so full of flavours and pot roasting works so well with small birds.’

Katie spent time with many top chefs to create the book, including the legendary Franco Taruschio. ‘He’s so quick,’ she recalls, ‘I’d pop out the room in the middle of a dish he was showing me and a minute later when I came back he’d have cooked something else entirely. He’d tell me that he had decided I had to try another great dish so he’d made it in an instant and then he’d tell me the history of it too, amazing.’ 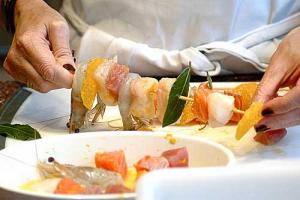 The risotto is on the go and Katie tells of the variations of method. ‘I met one star chef in Milan and he told me the risotto he served me was THE authentic Milanese risotto. A few days later another top chef served me a risotto that was quite different. He said his risotto was THE authentic one. Both were delicious but you begin to see how hard it is in Italy to define anything. Not only do the regions disagree but even chefs in the same town have different ideas.’

‘What is common is a good hot stock, you mustn’t let the temperature drop as you gradually add it to the rice, and you must toast the rice grains first and stir, stir, stir. No walking away. There is a way of pre cooking risotto that some kitchens use, but it never gives the same fantastic result.’ Her risotto has fistfuls of dried mushrooms and saffron powder and is already beginning to look deliciously creamy. ‘Left over risotto can be shaped into balls with a cube of mozzarella stuffed inside,’ she points out. ‘Roll them in breadcrumbs and deep fry and you have Suppli al Telefono, so called because when cooked and broken open the Suppli trail mozzarella strings like telephone wires.’ The book is full of ideas for ‘leftovers’ because the Italian chef and mother never wastes a thing, there is always something good for tomorrow’s lunch 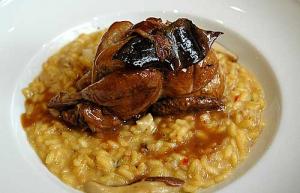 Getting her assistant to keep stirring the risotto, Katie moves on to dessert. Hot chocolate in a cup, a recipe she discovered outside Parma. ‘Our son loved it and chef gave us the recipe. Adults, we find, like a shot of brandy in it,’ she smiles. It’s certainly child’s play to make; milk, double cream, egg yolks, sugar and good plain chocolate. Everything but the chocolate goes into a pan and is heated to 85C and stirred to make a custard. Once the custard coats the back of a wooden spoon and you can leave a trail after running a finger through it, she adds the chocolate till it melts. Then it waits its turn to be eaten.

About an hour and a half after starting we sit down to eat, the fish starter is simple and simply delicious and as we serve up the risotto and quail Giancarlo, whose sense of smell must be sharp, reappears at just the right moment to bag himself a bowl of risotto and sit down with us. The quail meat falls of the bone, rich in flavour and the risotto has that 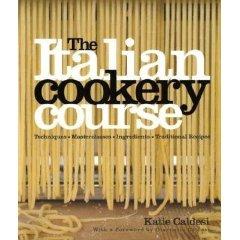 creamy consistency with each grain retaining a small crunch that for me is the hallmark of perfection. This is what I like to eat and Katie’s book is a treasure chest of such recipes and worth all the considerable work and effort she has put into it. The book is out now and can be bought from the Amazon link below. With its equal emphases on technique, ingredients, tradition and background, as well as being a very good read in itself, this is the Italian cookbook you need to treat yourself to as an early Xmas present. We left Katie and Giancarlo chatting over the last of the red wine, a couple of top chefs and clearly a very happy couple.