Driving through the leafy lanes of Cookham, I had anticipated a morning of education and instruction in the ways of the 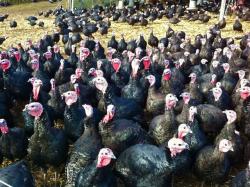 turkey, under the firm guidance of formidable farming empire, the Copas family. Having made their living off the land for over 300 years in the Berkshire village of Cookham Dean, the Copas family have been farming fruit and fowl for centuries.

But as I soon as I met the team at King’s Copice Farm and the young heir of the turkey throne Tom Copas, I realised that this was going be fun, lots of fun. After hearing the ethos behind their farming practice and touring the site, it became clear that this family’s claims for the welfare of their birds is not a shallow marketing gimmick. These guys really love their flock.

Tom delighted in telling us about their unique social and vocal tendencies, how they’re reared with TLC from the age of four weeks and the havoc that too many stags can wreak amongst the more peaceful lady population. You could see genuine amusement in his eyes as he told us how curious they are and why they have to carry out turkey firework training in the lead up to the festive season. Confronted with the inquisitive population of Copas bronze turkeys, we had a ball communicating with the noisy gang, as they answered loud and long to our turkey calls. 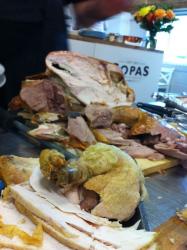 The mood took a turn for the serious as Tom showed us into the processing area, where their beloved bevy of tasty birds annually meet their demise in order to bring joy and digestive satisfaction on Christmas Day. Reared for 26 weeks, the Copas turkey has lived a full life in the company of happy brethren before meeting their end. Only once they’ve had time to fully mature and start putting on the fat that comes with middle age, are they finally sent to turkey heaven. Gently herded through a series of dim passages, the calmed turkeys are slowly lead into small enclosures. They’re processed with dignity in a quiet, darkened room, plucked by hand and hung for two weeks to deliver the tastiest, most succulent meat for discerning butchers and consumers alike.

After our tour we were taken to the newly-acquired premises that the Copas’ have prepared for their new venture, masterclass demonstrations. In the effort to promote their brand and engage the locals and curious customers, Copas will offer a series of Masterclasses beginning on the 24th October. The classes will teach game hunters and brave-hearted folk how to pluck and draw game, They’ll teach budding home cooks how to joint and bone poultry, and show dinner hosts how to carve at the Christmas table with confidence, plus a range of other complementary techniques to help you breeze through the festive season.

I could tell you what I learned from the delightful and charming Tom Copas the third, but that would be cheating. I will say that I came away with the confidence to carve my turkey this Christmas, without resorting to a panicked hack in the privacy of the kitchen, and I can honestly say that I had a good time in the process. Turkeys, aside from being undignified runners, awkward, needy and overly curious, are by far the noblest and brightest bird in the barnyard.

For more information or to book a Masterclass at Copas Turkeys, visit www.copasturkeys.co.uk
By Foodepedia15 October 2013Articles