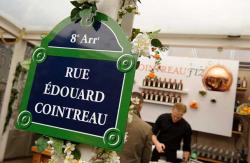 The spectacular Skyroom rooftop, in the shadow of The Shard, has been transformed into a lush flower garden complete with, a garden shed photo booth and an elegant Cointreau Fizz bar. Judith takes the lift.

I’m standing on the Rue D’Edouard Cointreau surrounded by floral displays with a cocktail in one hand and a little Parisian macaron in the other.  It’s only the sight of The Shard looming above that reminds me that no, I’m not in a Paris boulevard.

This little garden in the City of London is the work of Cointreau, who are promoting the iconic orange liqueur with a series of summer garden parties with a French feel.  The spectacular Skyroom rooftop, in the shadow of The Shard, has been transformed into a lush flower garden complete with, a garden shed photo booth and an elegant Cointreau Fizz bar. 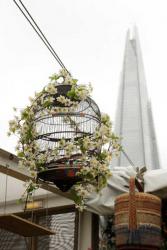 I must admit is a while since I tasted Cointreau, and then I think I drank it on the rocks. As a base for the cocktails served at the party, it works surprisingly well. My favourite is the Cointreau Fizz Cucumber & Basil but the pink Cointreau Fizz Strawberry & Mint which looks a bit like a fizzy Pimms is also going down well as the sun sets over London’s skyline.

Cointreau Fizz Garden Parties are being held at The Skyroom, London Bridge on Tuesday, 25 June and 2 July 2013, from 6:00 Ã¢â‚¬â€œ 10:00pm. Register for free at www.facebook.com/CointreauUK

–          Participants must be aged 21 years or over. Guests will be given tokens which can be exchanged for Cointreau Fizz cocktails

o   In 1875 Edouard Cointreau (son of Edouard-Jean who co-founded the company in 1849) created a liqueur from a perfect balance of bitter and sweet orange peels meticulously selected for their quality.  This liqueur became known as Cointreau

o   Cointreau is widely available at all good supermarkets and off licences at (RRP £15.99/ 50cl)