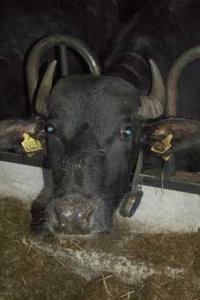 One of the first things you notice about Jody Scheckter, the organic squire of Laverstoke Park Farm, is that he notices everything. As we move away from admiring his herd of water buffalo sheltering from the rain in their massive barn, he mutters into his memo taker ‘another back scratcher for the buffalos’ having heard mention that the big beasts are currently having to queue up for their mechanical treat.

The second thing you notice is that Jody’s 8000 acres are going past the window really rather quickly and that, oh dear, there’s a muddy bend coming up fast. Jody was, in case anyone in the car has forgotten, the 1979 World Formula One Driver Champion.

Earlier, back in the dairy where he slowly and carefully makes wonderful mozzarella from his buffalo herd’s milk, I’d seen him pause for a millisecond looking into a bucket whilst still talking to me. Ten minutes later he pulls one of the dairymen aside to say that he thinks there is a mark in the bucket and it should be cleaned again. His attention to detail is remarkable and while his staff clearly like and respect him, they also know that he will miss nothing and so nothing can be missed.

This farm, financed from the sale of Jody’s business selling firearms simulation equipment now used all over the world by armies and police forces, isn’t just a huge enterprise it’s also a model of how an organic, self-sustainable farm can be. Tractors run on rapeseed oil, the organic compost heap is bigger than some farms and even the gates that automatically swing open as our car rushes towards them are each powered by a combined wind turbine and solar panel affair. For a man whose job once involved burning gallons of fossil fuel in seconds this is remarkably green. So why is he now making mozzarella?

‘I like mozzarella,’ he says simply as we watch the giant hopper, filled with fresh buffalo milk at 6 a.m. this morning and then heated to 90F, being rotated to empty its now separated contents into a large trough. ‘It’s only good when it’s fresh and if it’s come all the way from Italy to your plate then it’s not fresh is it?’ From the hopper pour gallons of whey and we step back to avoid the splash. Once that has drained, the curd appears and is helped out by Tomaso Valenzano wielding a large knife. Tomaso is Italian and has been making Mozzarella for twenty years.

‘You cannot replicate that knowledge with machines,’ says Jody as we watch Tomaso cut and turn the massive slabs already solidifying. Once Tomaso has ascertained that the curd is ready, partly by eye and partly by testing, the lumps are fed into a machine that replicates the ‘pulling’; the kneading and stretching under hot water once done by humans and which makes the curd elastic. ‘This we have to mechanise,’ says Jody raptly watching. ‘But this machine has two arms so it is very close to human in its work. It comes from Modena in Italy, the home of course of Ferrari my former racing team, going there to buy this machine was good for my memories.’ 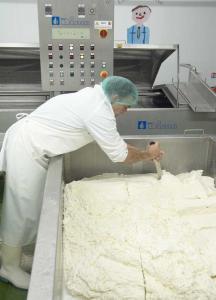 It’s such a simple process, in theory, making mozzarella, that Alex James bassist of Blur once made some in front of me using nothing but a saucepan and a camping gaz stove. Admittedly it didn’t come out all that well, but that was probably down to the combat conditions he was doing it under. Once Jody’s curd has achieved the correct elasticity it goes to a machine where it is pressed into moulds to make balls; small, medium and large. These then drop out into a water bath where they cheerfully bob along like the plastic ducks you used to fish out at fairgrounds. Jody catches a couple of small ones as they fall and we pop them in our mouths. They are fresh and with a firm but yielding texture but, as he points out, ‘not quite ready yet.’

They make their merry way to another bath, this one heavy with salt. This gives flavour, obviously, and causes the skin to set taut and glossy. Jody fishes out some more for us to try and they are now perfect. Now they simply get put into their final containers of brine and they are off to the shops, in this case Waitrose. ‘We use these plastic pots, ones designed for yoghurt actually,’ says Jody still throwing mozzarellas into his mouth like sweets. ‘Those plastic bags you often see mozzarella in don’t stack well and when you open them you always seem to send brine everywhere!’ Detail again. 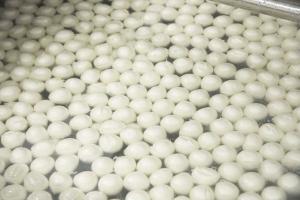 Over at the side Tomaso and Simon Shepherd are now making speciality Burratos. Basically they tear some ‘ritagli’ or ‘scraps’ of spare mozzarella into strips and place them inside a flattened disc of still hot and stretched mozzarella. The sides are pulled up around and fresh cream added before the ball is sealed. It’s ideally eaten within 24 hours and never past 48 and is, needless to say, quite delicious. ‘How many can you make an hour,’ demands Jody of his team of two. ‘About 10,’ they reply. ‘You need to make 40,’ he says and they laugh along with him, but you never quite know when Jody is joking. They exchange nervous glances when he turns his back. If he does indeed want 40 an hour, then that’s what he will get, or else.

At Laverstoke they make ice cream from the buffalo milk too and Jody takes me upstairs to sample some. His enthusiasm is infectious and he hands me spoonfuls of all the flavours faster than I can eat them. ‘What’s your favourite?’ he asks. It has to be the liquorice, a flavour from the past that’s perfectly balanced out within the rich ice cream with only the natural sweetness from the milk. Also standout is the ‘Grown up coffee’ flavour and ‘Mother’s Own Dolce’, all ice creams that you could happily drown in. 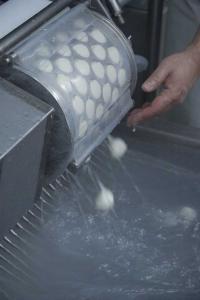 No time for that as we are off again. Back in the car Jody gestures at newly planted vines for wine that stretch as far as the eye can see. Next we see fields of hops to flavour his Laverstoke Park beer and over a hill and into the next field we come across pigs happily living in free range huts and spread out across the landscape like an encamped mediaeval army.

Their destination, like all the livestock, is of course the abattoir. Here though the abattoir is in the farm, not a stressful distance away, and was designed by an animal welfare expert from California. It’s light, bright and airy and there are no blind corners so that the animals never feel trapped. It’s never going to be a jolly place obviously, and I’m glad it’s not operating when we visit, but it’s as good as is gets.

The meat becomes, amongst other things, sausages. Trying these in Jody’s nearby mansion, a beautiful combination of preserved history and modern design looking out over his rolling acres of parkland, you can taste the quality. It’s the inevitable result of his incredible passion for pure organic grass and herbs for the animals to graze on, their stress-free natural lives (and deaths) and attention to detail at every stage. There is even a bio lab on the farm where state of the art gadgets from Doctor Who analyse soil samples sent in from all over Europe by farmers eager to find out how their soil can be organically improved. It barely makes any money he says but it is unique in Europe and another example of how, hard-headed businessman that he clearly is, Jody has higher things on his mind than just pure profit. He even has a school for farmers on site run by his wife. 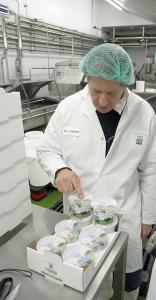 Jody drops me back at the main farm building and rushes inside to attend a meeting, he probably rushes everywhere. A modern organic farmer with no time for the tree-hugging side of things but a purely practical belief that he and his family should eat well and naturally so should we all.

Laverstoke Park Farm is a shining example of how things can be done if those in charge are clear-headed businesspeople, as well as organically inclined. Jody Scheckter is already in the driving seat and, as usual, is leading from the front.

The Farm Shop at Laverstoke Park Farm is available on line