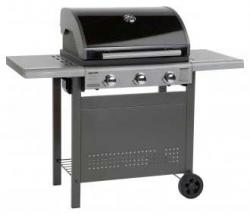 Like many a male I spent last weekend putting up a barbecue, driven to it by the rare sight of sun and a nagging family. Normally we just wheel out our trusty Weber charcoal BBQ but this this time we’d been persuaded to try a gas one supplied for testing – the Leisuregrow Grillstream 100 and just in time for National Barbecue Week too.

Now like most food fans I’ve always rather looked down my nose at gas BBQs. If you’re going to cook on gas, you might as well cook in the kitchen, has been my argument. A gas BBQ won’t give you that unique flavour, nor can you smoke so well inside it .Food that is, not you and 20 Marlboro.

On the other hand, there is the fact that a charcoal BBQ can be a right pain to light and in any case needs lighting a good 45 minutes before cooking can commence, something which makes it all too much of a fuss for weekday cooking.

This particular gas BBQ also had something special to recommend it; Grillstream technology.It was this clever idea that won approval in Dragon’s Den and went on to win a licence for factory fitting to Leisuregrow BBQs. To survive the den and emerge not fatally holed below the waterline is rare, to come out with a bright future even rarer.

Grillstream technology inside the Leisuregrow basically means that as it cooks the fat coming off the meat is swiftly drained away down a slope and eventually to a catch container. This stops flare-ups, always a curse when grilling as they blacken meats badly, and it also means the meat cooks on a film of its own fat while still getting the naked flame resulting in good sear and caramelisation.

Assembling the beast – it came in a huge box that blocked our hallway for 24 hours so we had to hurdle it every time we came in – was like most assembly jobs a bit of a trial. After moving small children out of earshot to avoid them hearing the inevitable serious swearing, and armed with socket set, screwdriver, sharp knife and a cup of tea, I studied the pictorial instructions and set to work. 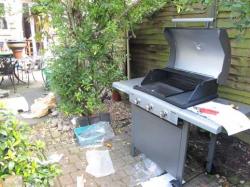 One hour later, sweating profusely and calling down damnation on the people that made the instruction book, I had it up and ready. Of course I’d had to disassemble it halfway through having noticed, with a resigned sigh, that I’d stupidly installed a key piece upside down, and I had quite a few nuts and bolts left over, but that’s always par for the course. It was nonetheless up and looking very impressive.

At this point I belatedly realised it needed a gas bottle. A trip to the local DIY store got me one filled with gas for £65. ‘Of course sir,’ said the spotty youth at the counter as I reeled back clutching my wallet, ‘only £25 of that of is for gas, the rest is deposit for the bottle.’ I pondered this for a moment, ‘so I get £40 back when I return the bottle empty and leave it with you?’ He smiled cheerfully, ‘no sir you get £12.50 back. Look at the BP contract’ I punched him to the ground saying ‘what kind of fool do they take me for? It’s not exactly going to be worn out is it?’

I didn’t of course, I paid up while making the kind of muttering, disgruntled noises I find myself coming out with more and more in shops as I get older and then left. 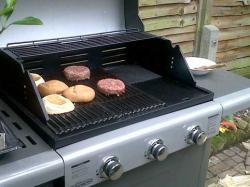 So onto the cooking. The BBQ has spark ignition, no batteries required, but as you can’t actually see the flames I wasn’t convinced it was actually going at first. Heat rising up soon convinced me. Two thirds of the grill area is Grillstream grills while the remaining third is a serious hunk of quality cast iron griddle plate. This too is angled so the fat can drain away. After a few minutes to let the griddles get hot we whacked on two thick pork chops for an adult dinner.

Almost immediately we could see the fat running down the U shaped grills heading off to the drain channel. After 6 minutes we flipped the chops and they looked good – crusty brown caramelisation and good sear lines. Another 6 minutes and they were done, as usual we checked internal temperature using the brilliant Thermapen. Anyone who barbecues a lot needs one of these, it’s a guarantee that you won’t send your guests home with food poisoning.

The meat was excellent; juicy and unburnt but with the just the right amount of crunch. Emboldened we put on some Donald Russell ‘carnivore burgers; very thick burgers indeed to see how the grill would handle a BBQ staple.

These did throw a lot of fat, and we did get a few flare ups, Inevitably some fat dripped past the the grill and landed on the heat diffusers and then caught fire. However the small amount that did fall meant that the flames went out again almost immediately. What was more concerning was the fact that the rear of the grill seemed to be a lot hotter than the front. This could have been a false assumption as the rear was more sheltered from the wind and so perhaps only ‘felt’ hotter. The burgers certainly cooked at the same rate anyway and again were nicely crusted outside, pink and perfectly cooked inside. Excellent meat but I would question the size though, a bit too thick really for the average mouth although anacondas would have no problem. 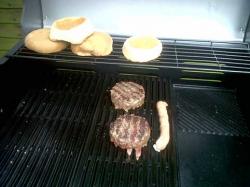 If you’re going to get a gas BBQ you’d be making a mistake not getting one with the Grillstream technology. It’s a simple idea but one that works very well and actually improves on the flavour you get from a standard gas bbq. The very reduced risk of flare ups is a big plus, especially when using every square inch of the big grills to feed a big crowd. The downside of course is that all that collected fat has to be disposed of and it’s a bit of a yucky job. We put ours in the corner of the garden for the foxes and it disappeared overnight and our cat looked oddly happy the next day.

The Leisuregrow is well-made and sturdy. with a lovely solid enamalled cover with built-in thermometer for proper slow roast BBQs, and has very useful side ‘wings’ to stand your plate and waiting meat on. In general it has the look and feel of a quality build and both larger and smaller versions are available. Also availabe is a Grillstream grill to retrofit to Weber charcoal BBQs which seems a great idea and the simplest upgrade ever.

The Dragons passed on actually taking up Grillstream, but Leisuregrow didn’t. It’s a decision that has given them a massive edge in the gas BBQ market and beyond.

By Foodepedia30 May 2012Articles