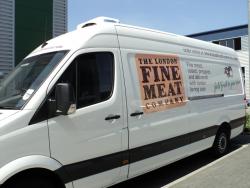 The London Fine Meat Company was established in late 2009. Stuart Ferretti, who owns the company, has a long history in the meat industry and his initial intention in setting it up was to supply the restaurant trade in and around London with quality meats. Earlier this year Stuart took the step of supplying to the public direct and having heard about this I decided to give his service a road test.

Being an enthusiastic supporter of on line shopping, getting most of my bulky supermarket items and wines that way, this seemed a sensible thing to do, especially since the decline of the traditional high street butcher. Although, it has to be acknowledged that specialist butchers seem to be springing up, for example about a mile from where I live in the space of a few years the High Street has seen three halal butchers open.

I’m no stranger to ordering meat on line although I have to say my consumption doesn’t really suit regular on line purchase. But at times, like getting the Christmas turkey or when entertaining, it’s perhaps the best way to source quality meats from some of London’s finest butchers without the need to go traipsing across this fair metropolis, taking the best part of half a day to buy it. I’m quite fussy about meat; other than chicken, there are few meats that I am happy to freeze, I find that the process makes most other meats bleed out more and as a consequence they are less juicy and succulent when cooked. 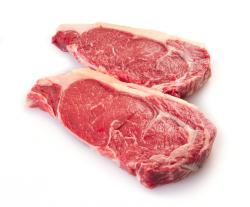 Anyway, I ordered a selection of meats from The London Fine Meat Company, but more about my experience later. Having consumed most of my order I went to Stuart’s facility in Streatham and talked with him about his business, to get the supplier to plate story.

Apart from giving me the background I have already mentioned he told me that stringent rules are laid down by the Food Standards Agency for suppliers. He has a hygiene consultant who visits regularly to help ensure that those standards are met. He showed me around the plant which is spacious, spotlessly clean and uncluttered, so much so that it looks stark and almost clinical, which arguably it should do. I was impressed with the order and cleanliness of the place. Since start-up in late 2009 Stuart has secured regular contracts with the Aubaine restaurant chain, the Renaissance Group of gastro pubs and Angus Steak House, as well as many individual restaurants and schools. He spoke a little about the exacting standards that chefs require and his need to ensure the meat he supplies is of the highest quality.

He told me that all his meats are sourced from within the UK and that everything possible is done to prevent wasted food miles. In preparing meats for delivery they are vacuum packed to prolong their freshness and given use by dates well within the margins that would normally be given by retailers. They are supplied in recyclable polystyrene boxes which The London Fine Meat Company will collect on the next delivery, wash out and reuse. His facility in Streatham even has a wind turbine to harvest power that helps run it, so his operation is as green as it probably can be.

So, to my experience. I placed my order three days before I wanted it delivered, giving a time slot that I would like delivery to be made, and yes, within that slot, a white clad delivery man came to my door with two boxes filled with the variety of cuts of meat that I had selected. They were each vacuum packed or sealed in coated paper packages, and all were chilled well with ice bars to ensure temperature control. 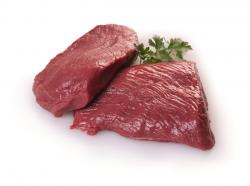 As for my order, firstly a pack of two organic rib eye steaks that, when cooked, were divinely tender and tasty. A 1.5 kilo boned and rolled leg of pork that I cooked in a hot oven (gas mark 7) for an hour and ten minutes and it was perfect, juicy and tender. I also had a 1.5 kilo leg of lamb that cooked in an hour at the same temperature, leaving it nicely pink in the middle and amazingly tender. A 1.5 kilo free range chicken was also very tasty, having been cooked for just over an hour at the same temperature (i.e. until the juices ran clear when the bird was up-ended). Wild venison haunch steaks were remarkably full flavoured and tender, despite my slightly misjudging the cooking and getting them medium, rather than medium rare. And there were some excellent meaty and full flavoured sausages, Toulouse and Cumberland, both of which went down remarkably well, and yielded hardly any fat when cooked. As you can see I was very happy with the items I’d ordered, the meats were all very high quality and I am happy to recommend The London Fine Meat Company to anyone.

When I was discussing my experience of their service and the quality of their meats with Stuart, as well as the lack of quality butchers around, he was conscious that the point at which free delivery was offered (£75) might be a little high for the domestic market. As a consequence of this he has recently lowered this giving free delivery to customers making orders of £45 or more. I should think a family of 4 or 5 would probably get through that amount of meat in the space of a week and should allow them to avoid the need to freeze, thus eating the meat at its best.

What’s more, as an introductory offer, The London Fine Meat Company offer a 10% discount on every customer’s first order, which is certainly worth taking advantage of. Stuart told me that he will deliver to addresses London-wide. They have had a few teething problems with their web ordering so if you happen to experience any, give him a call, the number is on their site and if there is a problem he will do his best to sort it out.