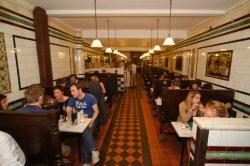 The seafood certainly looks game at The Bonnie and Wild and the game looks good too. This old Manzies restaurant, more used to serving Pie and Mash, Jellied Eels and other dishes that my mother claims to love, probably has never seen anything like it.

By day the original interior, all cracked tiles and wooden booths, is presumably home to toothless old pensioners, the dwindling remainders of the area’s once proud working class population, sucking up the aforementioned oddities. Now every Saturday night, bowing perhaps to the inevitable, it’s transformed into somewhere a great deal classier and rather more expensive.

The clientele tonight are very Islington of today; young, well-paid, self-confident and middle class and some have even brought their parents, silver-haired and quite stern looking people from the nicer parts of Norfolk.

The little four seater booths rather Balkanise the crowd, and it certainly is a crowd as this opening night is sold out, but at the same time it’s rather cosy in the way local Indian restaurants used to be. The narrow marble-topped tables mean a bit of jostling for those sitting opposite each other, you have to offset your plates to jigsaw fit, but it’s all good fun.

Bonnie Gull Ltd and The Wild Game Co are specialist suppliers of Scottish Seafood and seasonal Highland game at Leadenhall Market and Broadway Market respectively. The Bonnie and Wild is their ‘part time’ BYOB restaurant open only on Saturday nights. It’s thankfully not a ‘pop up’, a phrase as tediously cliched now as ‘small plates’.

A short menu is punchy with promise and to start we have the BBQd Scottish pigeon breast with chorizo and caramelised apple and BBQd Mackerel fillet in a chilli and coriander marinade. You may notice a theme here – BBQ. This is because Manzie’s kitchen is not a restaurant kitchen as such and so the team has supplemented it in the simplest way possible with a grill. 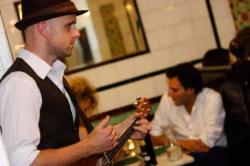 It works. The pigeon is perfectly cooked, as in barely cooked at all. Already an excellent piece of meat, it benefits from the barbecue and the sweetness of the apple. The chorizo could have done with a bit more cooking to give it a texture contrasting with the pigeon, but that’s a quibble.

Mackerel for me is always too strongly flavoured a fish, but P loved hers, the briny capers bringing a welcome whiff of the ocean and the peppery rocket and spiky chilli here all good partners to a self-assured and firm fillet.

Coley is now an everyday restaurant fish, where once it only fed the cat, and it deserves its new status. Here it came coated in chilli and also BBQd, but neither treatment did it too many favours. It’s too squishy a fishy to be dealt with harshly and it lost texture and the chilli was too heavily laid on.

Far better were the two big langoustines and the razor clams that came with it, both of which were sea fresh perfect. The BBQ flavours made them sing even while I was smashing open the langoustine claws to get at their sweet meat. The samphire grass lawn underneath had crunch and the lemon and parsley butter was smooth and cut into the meaty razor clams. 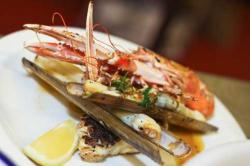 Chips were easily the best I’ve had all year, fluffy, crunchy and with those lovely little bits in the bottom of the bowl you tip into your mouth when you think no one’s looking.

BBQ’d asparagus had a somewhat odd flavour, of lighter fuel it seemed, but the BBQ looked gas to me. Not unpleasant, but just a bit odd. A bit like the bloke who wandered around the room playing the ukulele all evening.

A selection of Scottish cheeses wasn’t exactly from North of the border, but nae need to get annoyed about that. They were fine cheeses at a perfect room temperature and that’s what matters. A citrus tart with raspberries and crème fraiche was sharp and refreshing, a simple dessert done well.

And The Bonnie and Wild is a simple idea done well – take quality, don’t muck about with it and do it all in an informal fun setting. This was opening night and any slight mistakes will hopefully be fixed in time for the next Saturday. Don’t forget to bring your own bottle and reservations are definitely a must.