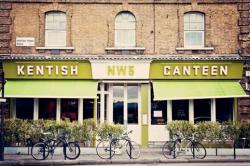 It’s an ugly knot of a junction where Kentish Town train station hammers into Fortess Road. Motorfumes whirr before being sucked into a slipstream to Parliament Hill up the road and there’s a profusion of betting shops banging out the desperate.

Apparently, this patch of town is being spruced up with hipster galleries and music venues. What I loved most, however, was the al fresco terrace at the Kentish Canteen – an all-day diner – that became a breezy suntrap on a boiling June Saturday evening as we looked out into blue skies.

Still, the décor was refreshing. The place has a New Yorky feel, sort of high white ceilings with a raucous orange, bronze and lime green colour scheme and big, colourful crayon prints splashed on the walls. It was pretty full of funky types, healthy looking diners mainly under the age of 30.

After a swift Mohito, we shared some nicely-balanced baba ganoush with coriander, chilli and crostini – although where was the chilli? The flaked smoked salmon they served, smoked themselves in the cellar, was excellent, with soft lemony undertones. Serrano ham on Spanish tomato toast – couldn’t fault it, and a roast Piedmont pepper filled with tomato, anchovy and garlic – did what it said, and again, no flaws.

In fact all the food was like this – pretty faultless – which perhaps is what this creaky corner of Camden borough needs to redistribute the wealth. So my grilled chorizo sausages with roasted sweet potato chunks, spinach and corn relish was just that, gastropub-style, raw spinach leaves under baked potato chunks, nothing fancy.

And T’s spinach and ricotta ravioli with asparagus, cream and lemon sauce was all those ingredients and fine – although the measly shavings of asparagus stalk were slightly disappointing. Our puddings of passion fruit cheesecake and homemade raspberry ripple icecream – that night strawberry – were similarly fine.

The wine list, very reasonable in pricing from £14.95 to £33 for white and red, covered a good range of classics although the list itself suffered from having no tasting notes whatsoever where a couple of words would do well.

So, Kentish Canteen is a good bistro-style café. Yet despite some charming service and the almost flawless food, I can’t rave about it like other reviewers have. Where’s the dirt, the raw knuckle of cuisine that differs, that exceeds expectations? Not here, this place simply fulfils expectations. Although that sunny fumey terrace, I must say, is deliciously wild.