It was 11.30. I push the door open at La Cucina Caldesi and walk in, the place is buzzin’, everyone gettin’ ready for the Loyd Grossman Chilli Cook-off. It was tense in this steamy joint, but I was cool, confident that I was gonna be left standin’ tall at the end of this bun-fight. Lights, camera, photographer and sound guys were there making sure they’d catch every moment of this journo-clash. It wouldn’t be pretty. Then through the door walks Andy-The Chilli-Welch, the Press Association’s hot shot, I knew it’d be tough. There’s some nervous, edgy eye contact, we’re introduced, shake hands, then move to different parts of Caldesi’s place. The clock was ticking by, moving ever closer to High Noon. 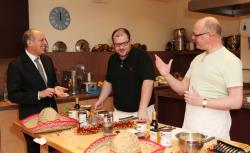 There were supposed to be three of us in this battle, but as noon approached, it was clear we had a no-show – it was between Chilli Andy and me. As the seconds ticked by to noon, the tension rose, you could almost hear ‘Do not forsake me oh my darlin” playin’ in the background. The steaks were high (well, ground beef within use by, actually) – this hullabaloo had been arranged to find the perfect chilli, as part of the launch of Loyd Grossman’s ‘classic’ and ‘fiery’ chilli sauces, there could be casualties.

Noon arrives and Loyd signals the start of the battle – my chilli, pretty much a classic, against Chilli Andy’s ‘out there’ version, usin’ pancetta, anchovy and some other less conventional ingredients. I think to myself ‘this’ll be a cinch’. The theme to ‘The good, the bad and the ugly’ now in my head, we both chose our weapons, each going for pretty sharp chefs’ knives. We get down to the business of the day, Loyd moving between us tellin’ us that chilli is very much an American western dish not Mexican as most think, and checkin’ on how we were makin’ our different chillies.

I chop some onions, then move to the range with those and the minced beef in hand, put a pan on a high heat with a little oil and cook the mince through, to release any fat. With a bit of caramelisation on the mince I take it out of the pan, damn! there’s no residual fat. The beef was very lean, I have to add a little more oil before putting the onions into the pan to sweat down and pick up the meaty bits stuck to the bottom. This done, I throw in the herbs, the chilli powder and ground cumin and cook them though before putting the cooked mince back in. In goes a tin and a half of chopped tomatoes, tomato puree, a glass of red wine, some water, an Oxo cube, a bay leaf ripped into four pieces and I bring it to a simmer. My chilli is practically there, it just needs simmerin’ for about 90 minutes and some adjustments later. What’s that, just an hour to cook it? No! I have to crank up the heat.

About 10 minutes to go, our no-show, Hayley ‘The Heat’ Nolan bursts in, declaring that had she got there on time her chilli would have beaten both Andy’s and mine. I’m not convinced; her timing made me think she wanted to avoid the probable shame of not winnin’ and she claimed to be a novice. 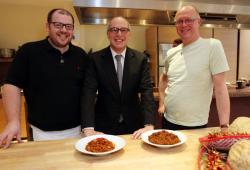 Time’s up, the judgin’ begins. Chilli Andy and me take our work to the judgin’ table, Loyd tastes Andy’s, coughs, splutters; he needs water, too much chilli heat? He composes himself then tastes mine; he likes it! Loyd then comes to a decision….. he dodges the bullet, declaring them both a successes, but to see how it all pans out watch the video footage above.

After the judgin’ we sit and chow down on the competition chillies and chillies made using Loyd Grossman chilli sauces, as well as other samplers usin’ Loyd’s sauces includin’: a mini burrito, tacos filled with chilli beef and avocado and more. I have to admit, the Loyd Grossman classic and fiery sauces are very good, used to make a chilli or to add tang to other Mexican style dishes, they were all very tasty and not head-blowin’-off hot.

If you want to cook up my version of ‘The Perfect Chilli’ you will need: 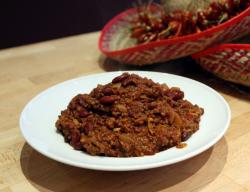 3 to 4 teaspoons ground cumin (start with 3, add more after tasting about 40 mins into cooking)

4 decent sized cloves garlic, mashed into a pulp with salt

About 1 can of water

Oil, if the beef doesn’t yield any fat when cooking

Use the one I describe above to cook. You could substitute the wine with a bottle of lager – Loyd tells me that it adds to the taste – or you could just increase the water you use. Ideally a chilli needs to cook on a low heat for at least 90 minutes (longer if possible) simmering and thickening gently, and being stirred regularly. It should have a good rich thick consistency when finished, enough to stand in a mound when put in a dish, but not dry. Towards the end of the cooking process you should add salt and pepper to taste (if needed) and if you crush a couple of cloves of garlic and stir them around in the chilli before serving (removing those and the bay leaf before plating up) the crushed garlic will freshen up the garlicky flavour. Tip: I always make up much more than I need, it freezes well and can be reheated in the microwave with perfect results.

If you want things simpler and far quicker, use Loyd’s chilli sauces, for those you just have to brown the meat, add the jar of sauce and simmer for 10 minutes before serving. It couldn’t be more straightforward and they do taste good.

For more information about Loyd Grossman sauces, go to: www.loydgrossmansauces.co.uk