At Victoria’s A. Wong restaurant, Nik Speller went in search of culture, understanding and an 8-course taster menu that read like a journey around half of the globe. 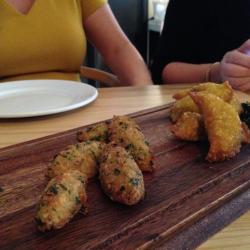 If, four weeks ago, someone asked if I knew where Macau was, I’d have said yes and then hoped there wasn’t a follow-up question like:’Well, where is it then?’. I didn’t know where Macau was, my first answer, just a foolish attempt to look clever and cultured.

If someone asked me that question now, I’d say:’Of course, it’s near Hong Kong’. I’d also go on to say that this month, there is an opportunity to sample Macau cuisine at A. Wong, in London’s own Victoria.

That’s the power of social media and the power of the press launch. Invite people to a restaurant, feed them, and play a short video clip. Guaranteed attention. Macau cuisine does deserve this mind you and I can say this now with the intelligence and culture of someone who has tried it.

A. Wong, the restaurant named after Head Chef Andrew Wong, is playing host to Florita Alves – a specialist in Macau cuisine – from 17th to 29th November. Together, they’ll be serving up an 8-course taster menu of the eclectic food that Macau is renowned for, influenced as it is by the culinary traditions of Africa, Portugal and, of course, China. 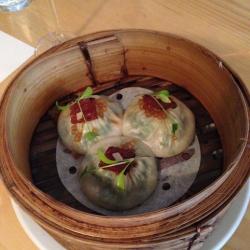 The taster menu started well. I like things that have been fried, perhaps I’m part Scottish? Salted cod fritter and a pasty of pork with tarragon. Crunchy little things, dipped in something green and mildly spicy. I could see myself sat at a rooftop bar, drinking an alarmingly luminous cocktail (like the one in the promotional video) and swallowing plenty of these whole.

The second course was a Shanghai dumpling with a small square of glazed dried pork. I could have taken a far larger square of that pork, say a Yorkie sized bar of it. The dumpling, with it’s oozing liquid that you have to drink before chewing, cold and strange. Not really my cup of tea. Neither was the prawn. Too fiddly. Too much picking, not enough chewing. A net loss on the calories front. 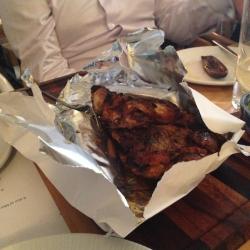 The chicken though, now that was a dish. Delivered in a bag, black from it’s roasting and hot with spice. Fingerlicking good should be their slogan, if someone hasn’t taken it already. I just wish I’d had more of it. Damn food bloggers, writers and journalists are a greedy lot, and even though I steamed in first and did my best to barge them out of the way, I still came away with a piece you’d struggle to call a nugget. Networking opportunities ruined for all eternity for a mere morsel.

The final dish of the eight, was a Portuguese egg custard tart, served with a small glass of tropical Guinness – coconut, coffee jelly, and kahlua. The tart was boiling hot and my pig-like eyes caused the roof of my mouth some trouble, as I wolfed it down far quicker than it could cool. Sweet, sticky, delicious. The tropical Guinness (my name, not theirs) was an Irish coffee, accompanied by that old fashioned scent from the day’s of your grandmother’s baking that only coconut can bring. I can’t tell if I liked it or thought it awful. A strange concoction that I’d try again, if only to force myself down on to one side of the fence or the other. 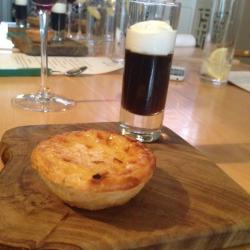 Macau cuisine, it would seem, is a real talking point around the dinner table and on Twitter. It seems that there’s some knowledge out there, but if the sample size was one, and that sample was me, the average understanding amongst the public would be slim to none. What better chance is there than this, to sample the cuisine of this special administrative region designed, prepared and cooked by someone who knows it best.

The Macanese tasting menu is available from 17th to 29th November at A. Wong. Booking is required: