San Sebastian may have all the headlines when it comes to food, but Madrid can still make the grade. And when you get tired of tapas, there’s the museums and art to graze on. With Gastronomica Madrid 2013 now in full effect, Nick Harman hit the city streets to see a tiny bit of what’s on offer. 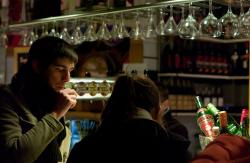 Do you like football? Do you like tapas? Then you’ll love Puerta 57 in Madrid. Pass through the busy Barra Cibeles, redolent of garlic and the after shave of well-dressed Madrilenos, into the SalÃƒÂ³n Madrid and you’re gazing down at the floodlit ground of the Real Madrid stadium. Way down there epic matches have been fought and the sainted feet of Beckham once regularly twinkled over the hallowed turf. Up here your only struggle is to decide which of the premier league tapas on offer to put in the back of the net next. 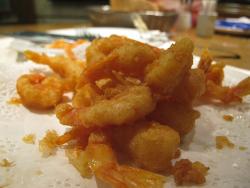 I ate a Russian salad that would have made Lenin turn capitalist and plump prawns robed in a delicate web of dry, crispy batter. A plate of cutely shirt button sized clams, briefly steamed open, drenched in garlic, butter and oil and whisked over to diners from a stove just ten feet away, were sweet and nutty. I could have stayed all night. 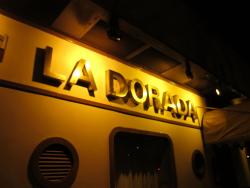 But the essence of tapas is to taste and move on and so fuelled by Rioja it was off to La Dorada. A seafood place (a dorada is a sea bream) with an ancient wooden bar running deep into the gloom at the back it has a more informal vibe. The fact that it couldn’t be further from the sea, Madrid being pretty much in the dead center of Spain, doesn’t stop the fish here being first class. 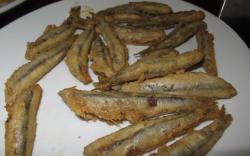 Whitebait, or possibly fresh anchovies, came in light batter and in heavy profusion together with seared cubes of dogfish, or rock salmon as we sometimes call it in the UK.  It’s a relative of the shark (the barman resorted to miming Jaws to explain this) and fried it has pleasingly solid texture, almost like monkfish. A plate of fried eggs slipped on top of matchstick sized battered and fried fish was my favourite here, the egg broken as soon as the plate landed so as to ooze out into the fried fish and make a delicious mess. 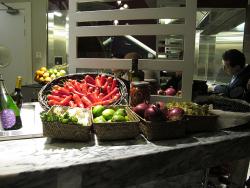 Io restaurant was next, my progress now a little slower owing to the amount of fried food I’d taken on board, not to mention all that Rioja. Deep in the financial zone of Madrid, Io looks the part – smart, shiny, sleek and modern and with a bouncer on the door.’No I’m not!’ corrected the hombre,’I look after people’s cars as the parking’s a nightmare around here.’ 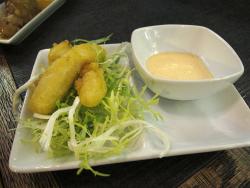 The tapas at Io are advertised as modern; meatballs arrive on dinky white mini-plates along with delicate croquetas of jamon and salt cod with a bath of mayonnaise for them to be plunged into. A little lacking in atmosphere in the evening, Io is probably livelier at lunch when the local businesses pop in. 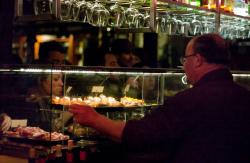 I swung by the Mercado San Miguel in the old town, built in 1916 this was once one of the city’s main covered market places but today it’s been refurbished to be a more modern home of tapas bars and food shops. The original cast iron pillars soar up to support a roof of wooden planks and its location near to Madrid’s main square makes it popular at all times. 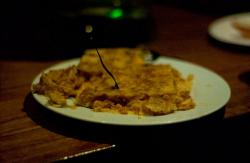 There are over 30 food stallsand a great cookbook shop here by day, but at night the tapas bars spill out to occupy any spare space. It’s crowded all the way up to closing time and like our own Borough Market it’s a bit touristy and pricey, but for at least an hour you can happily wander about, shoving through the good-natured crowds and grabbing a bite here and a booze there. 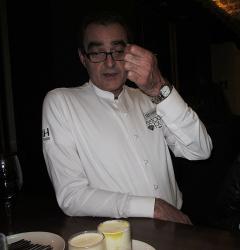 And finally to Estado Puro. Based in a hotel, this is nowhere as bad as that might suggest. The decor is designery and it’s convenient for a post Prado museum stop. They do a modern tapas menu here, but for me the mussel’meatball’ went too far and hit the gag reflex. The chef is ex El Bulli, so that means some creative ideas are on offer. Sliders were overly salty, but then you shouldn’t really go to Madrid to eat that kind of stuff anyway. Much better was’21st century tortilla’ which came surprisingly in a glass, the potato foamed on top of a runny yolk with some fried onion. You had to down it one and, tasty though it was, I began to get that familiar Fat Duck/El Bulli sense of queasiness coming on, although I suppose after four hours, lots of fried food and big glasses of red wine, it may not have been entirely the tortilla’s fault. 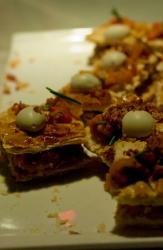 And so to bed, barely scratching the surface of Madrid’s food offerings, and regretting rather the Spanish people’s seeming suicidal disdain for green vegetables in favour of meat and fried things. But then who doesn’t like fried things, and let’s face it you can always eat salad tomorrow!

Madrid’s Gastronomica festival  ‘for the five senses’ runs from 19 January to 3 February offering tapas routes with a signature tapas and a bottle of local beer for Ã¢â€šÂ¬3, as well as selected restaurants serving special set price menus at Ã¢â€šÂ¬ 25 and Ã¢â€šÂ¬40. There are also six selected’super’ restaurants at Ã¢â€šÂ¬75, one of them being cheffed by our own Simon Rogan from L’Enclume. 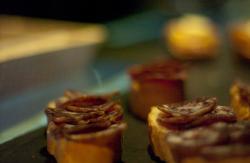 There are guided visits to, among others, the Thyssen and Prado museums to see unique works of art centered around gastronomy and  visits to the normally private kitchens of the ancient Royal Palace to see how chefs managed before Thermomixes and Sous Vides.

The full Madrid Gastronomica programme can be seen here.