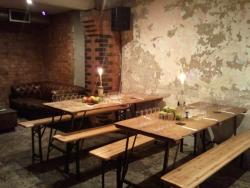 I’ve never been a fan of cider – it brings back too many bad memories. Most resounding of these is that of when, at the age of fifteen, in the queue to a scuzzy underage night in East London, my friend handed me an unmarked bottle of ‘White Ace’ that I foolishly took a swig of. Not believing that a drink could taste that bad – and all too aware of Tom’s reputation as a prankster – I remember wondering how Tom had managed to carbonate his own urine.

Needless to say, most cider is a world away from the putrid concoction backed by kids who have yet to warm to the taste of beer: friends of mine have been keen to prove that most cider is actually quite nice. But despite their instance, when Magners invited me to a tasting event for ‘Magners Specials’, a range of apple and pear ciders infused with spices, I was wary.

Situated in the basement of an East London bar, the tasting session is run by Aoife Sheehan, who developed the three Magners Specials flavours. ‘These are my babies’ she tells us – ‘if you don’t like them I’ll cry!’

She is also one of the presumably small group of people in the world with a PhD in ‘Flavour Science’, a fact that becomes evident when she begins to take us through the intricacies of human taste and the impact of production methods on flavor.

The set up reminds of the session me of a secondary school science class with long benches decked out with pipettes, vials of powders and rows of plastic glasses, and with Aoife talking us through each step of the process.

In such an environment, I keep having to remind myself that the vessels in front of me are filled with cider rather than potassium permanganate and that it’s safe to drink their contents. This sense of unease is most profound when we ascertain whether we are ‘tasters’ ‘non-tasters’ or ‘super-tasters’. The procedure for this involves dropping blue food colouring onto one’s tongue, placing a piece of card with a hole over the coloured area and counting the number of taste-buds: In addition to being mortified when the girl sat opposite me manages to take a photo of me halfway though this undignified procedure, I cannot escape the feeling that the vivid blue liquid in the pipette is going to burn a neat hole in my tongue. It doesn’t, and it transpires that, like most of the room, my companion R and I are ‘tasters’. Content to be distinctly average, we begin with the actual cider tasting.

We start by trying two of Magners’ current flavours. First is Magners Original, which, to my infinite surprise, is actually quite nice, with a good depth of flavour and pleasing warmth. R, a fellow cider sceptic, seems less enthused but concedes that it is much nicer than what he had expected. Though R far prefers it, I am less keen on Magners Pear Cider, which, though less insipid than other pear ciders I have tried – Aoife notes that Kopenberg Pear Cider has twice the sugar of Magners’ – is still slightly too sweet for my liking.

We then open the first of the Magners Specials: Pear and Ginger. This tastes more like ginger beer than cider, but is less fiery and has a distinctly cidery aftertaste. Again, this is much less sweet than its closest competitor, Crabbies Alcoholic Ginger Beer. Aoife agrees ‘Crabbies is very sweet’ then adds ‘this is much more serviceable’ – as far as I can make out, this is an industry euphemism for ‘easy to back’.

Spiced Apple and Honey, the second of the three new flavours, tastes more like a conventional cider, but has a strong cinnamon aftertaste. It’s quite an evocative taste, and as I sit trying desperately trying to figure our what it reminds me of, someone on the other end of the bench exclaims ‘it smells like Christmas!’ She’s spot on – it really does.

The final bottle contains Magners Spiced Apple and Rhubarb. This is similar to Spiced Apple and Honey; it also has a cinnamon aftertaste but has a smokier, more acerbic quality to it. Of the three, this is by far my favorite.

Though I can’t see Magners Specials dragging me away from my beloved beer any time soon, I can easily picture myself ordering any of the three flavors – particularly in the winter. This bodes well for the new range – if Magners Specials can convert me, they can convert anyone.