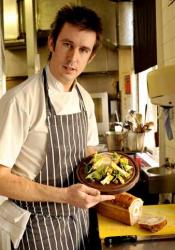 Lord but the 70s were ugly. Truly the decade that fashion forgot. You only have to look at old TV footage of riots and other fun events to see horrors that would curdle your milk, and I don’t mean the coppers whacking hippies with truncheons either. The flared trousers the police were wearing should have been a sackable offence all on their own.

It was a funny time for sure. The 60s Summer of Love colour and vibrancy had morphed into a permanent grey drizzle over the land. Rock bands were portentous and boring, everlasting strikes meant rubbish lay uncollected, while corpses went unburied, and upstairs in a nondescript semi-detached house in South London I was staring out of my bedroom window waiting for punk to happen.

My mother was unaware of the storm of filth about to literally break out over her head, she was busy in the kitchen experimenting with weird things she’d been given by her Italian friend at work – garlic, olive oil, basil – that sort of thing. My father viewed it all with deep suspicion; he liked the days of the week to be marked by the same dish, Lambs’ Heart Monday, Steak and Kidney pie Wednesday, Sausages and Mash Thursday etc. I can see the food now lying on those horrible patterned plates that vied with the wallpaper in an effort to give you instant migraine.

None of this nostalgia bothers Jesse Dunford Wood of The Mall Tavern though as he wasn’t around to see it, being not yet born at the time. 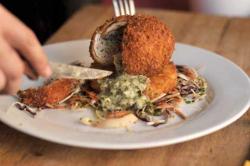 He finds it all rather fascinating and exciting instead, so much so that he has constructed his pub menu around retro dishes and has put out a selection to show us.

Forget fancy presentation, this stuff is as ugly as a Led Zeppelin roadie’s bum crack. Now I don’t hold that presentation is everything, far from it, but this is pushing it rather. Take the Chicken Kiev for example, when we watched Jesse make it for us we didn’t really take it in. Now we see a big old ball, (Jesse says many customers mistake it for a Scotch Egg) sat on a hash brown, itself on a bed of coleslaw. It’s a lot of earth colours, as well as lots of flavour, especially when you stab the Kiev to release a larval flow of garlic butter onto the layers below.

Pork crackling with bramley apple sauce is gorgeous, a bar snack you can feast on, while that old dinner party cliché of Fried brie with cranberry sauce is actually better than you expect or remember. ‘PGT Village’ smoked salmon and soda bread from the smoker on the pub roof is as good as Hix’s salmon, whilst Pigeon Pie is very well made; light golden pastry surrounding two perfect pigeon breasts. Overcook those and you’ll be eating them for a week and then using them to repair your shoes. It’s delicious but filling, maybe we ate more in the 70’s to replace energy lost whilst strenuously disco dancing? 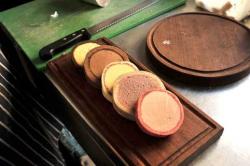 And to finish Jesse rolls out the Arctic Rolls, that staple of 70’s tea times. I recall the excruciating brain freeze of eating them, because mother always forgot to get them out early to defrost a bit and I was too greedy to wait. Jesse’s come in all flavours and are of far better quality than I recall the originals ever being. Nostalgia only takes you so far, clever cooking does the rest

I can’t imagine the Mall Tavern winning any Michelin Stars with this kind of food, but I can see them winning a loyal and regular customer base. The latter is what pays wages, not the opinions of faceless ‘inspectors’ who probably wouldn’t understand the menu anyway, so pull on your flares and boogie down to the Mall Tavern and tuck in.