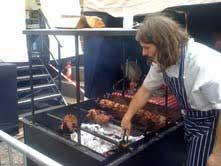 The Manchester Food and Drink Festival is now in its thirteenth year and its promoters claim that it has become one of the prime fixtures in the culinary calendar. There are events spread all across the city and in its suburbs. There are meals on the city’s trams, a cooking workshop aimed at promoting healthy eating amongst children and a fine foods village offering such rarities as ostrich and kangaroo burgers.

But as the festival expands and seeks to become established as a major culinary festival, it faces a problem that is a microcosm of the city’s own development. For as Manchester moves away from its industrial past to a city that is becoming of a cultural hub – the BBC relocation being in full swing – the city needs to be able to embrace its future whilst not losing touch with its local idiosyncrasies. Looking through the festival programme, one event embodied the possible antagonism between the old and the new. This was an event featuring a three course meal made using ingredients found in neighbouring county Cumbria. The location for this particular meal? The Harvey Nichols store found in the city centre.

But on reflection, this presumed antagonism may just be a form of snobbery on my part. Why shouldn’t a city like Manchester be able to have both a Harvey Nichols shop and a menu reflects regional produce? On the second day of the festival, I went in search to test whether this was a viable conflict or merely an imagined problem.

The event was held at the Festival Hub in Albert 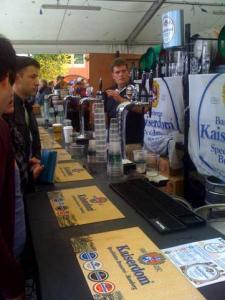 Square. It married two events; the chocolate festival and the Greater Manchester Ale Festival. It was held on a small scale with only a couple of hundred people present in a fenced-in area. The chocolate festival had a mixture of local producers and those based in London but representing the business they had in Manchester. The most interesting producers came from just outside the city, based in the suburb of Ramsbottom. This town boasts a high density of culinary curiosities. There is the Chocolate Cafe which is famous for its chocolate pizzas and it was these that drew a long line of slathering attendees. In addition to an award-winning wine shop which was offering small thimbles of chocolate wine, local producers were showing off their use of the cocoa bean. My girlfriend snaffled up a Belgian chocolate pudding made by a local farmer. I wouldn’t say that it was one of the best puddings I have ever had but the richness and complexity of it made it well worth the four pounds handed over.

Moving towards the Real Ale tent, we saw a staple of local flavour with a brass band playing. Only a few metres away was another Mancunian institution, Holland’s Pies, who have not only been around since 1851 but are also the proud sponsors of Coronation Street. Their pies were exceedingly popular and it was not hard to see why. There was a long line waiting and by the time I got to the front, several of the pies had sold out. However, their peppered steak and steak and kidney pies went down a treat and were a welcome comfort under the familiar grey skies.

Inside the ale tent, there were fifteen breweries and microbreweries showcasing their wares with a mixture of those that were local to the area and those that came from further afield. This was certainly the most boisterous part of the event and the staff did well to keep up with the demand, especially with a swathe of rambunctious rugby league supporters in tow. The first ale I tried was a pale ale from the local Greenmills brewery called Northern Lights. It was rather flat and with not much in the way of real potency. However, my personal favourite was Weston’s Cider Twist, a raspberry flavoured cider that managed to restrain some of the more tart aspects of the raspberry flavour.

The event went some way to convincing me about the possibilities that the Manchester Food and Drink Festival has to offer. It is not ashamed to have such fancies as Belgian chocolate puddings on display whilst reassuring you that you can always find somewhere offering a pie and a pint.