First of the rockstar chefs, rejecter of Michelin Stars and grabber of headlines, Marco Pierre White is one of P&O Cruises Food Heroes. Nick Harman catches up with him mid-voyage 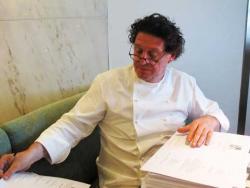 Ã¢â‚¬Ëœ’I signed around 1500 of these yesterday,’ says Marco Pierre White indicating a pile of menus in front of him,’there’s about another 1000 still to go.’

Ã¢â‚¬ËœYou should get a rubber stamp made up.’ I suggest tentatively,’that would make it a lot easier wouldn’t it?’ He turns the Marco stare on me and there’s a beat of silence.’But it won’t be the same will it?’ he points out,’the people getting it won’t know it’s fake, but I will.’ 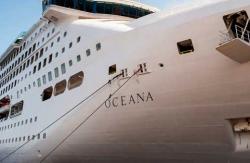 No longer a Michelin 3 star chef, he eventually threw them back saying that he was sick of trying to impress people who knew less about cooking than he did, Marco is still a man who doesn’t cut corners and doesn’t let customers down. 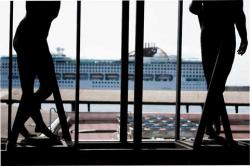 I’d watched him on and off the day before, sitting in his restaurant Le Jardin aboard the P&O cruise ship Oceana, signing those menus and always happily pausing for conversation with any passenger who stopped by to say hello. The man who once revelled in creating tabloid friendly scenes in his restaurants, with diners being ejected or insulted often simultaneously, is a gentle man and a gentleman these days.

P&O take food as seriously he does; Marco isn’t the only big name they have on board their ships there’s Atul Kochhar of Michelin starred Benares in Mayfair, James Martin of telly fame, patissier Eric Lanlard and wine expert Olly Smith as well. All either have restaurants aboard P&O liners or come aboard to do demos and lead shore excursions.

And the food is remarkably good wherever you eat here on Oceana, not just in the celeb restaurants, and I tried every breakfast, every lunch, every dinner, and every snack and afternoon tea just to make sure. Any image you might have had of people sliding about in furiously pitching canteens at sea while eating institutional food are dispelled immediately you get on board.

Food is very much a form of entertainment on a cruise liner, especially on days when the ship doesn’t dock anywhere. To be able to eat well any time of day is something fun to do, just like any other of the myriad forms of entertainment on board. And it’s nearly all inclusive; once you’ve paid for your cruise you don’t have to pay for any food at all unless you eat in Le Jardin or the smart Horizon restaurant up on deck basking in the evening sun and even then it’s only a small surcharge for food of such consistent quality.

Take Marco’s Le Jardin for example. High up in the ship’s central atrium it’s quietly genteel. If you want to eat there in the evening it costs a measly £5 supplement per head. And as the ship bobs gently to the next sun kissed destination, it’s a very pleasant place to be,

Despite the restaurant’s name it’s Italian food that’s being served, but then Marco does have an Italian/French name himself.’I never used the Pierre bit growing up in Leeds,’ he tells me,’I had enough problems at school being called Marco as it was. It was Egon Ronay who later started using my full name in print and it stuck.’

The food menu changes every other day for the evening meal and includes starter, main and a trio of desserts. A sharing platter of Prosciutto, Duck Rillettes, Salami and Bel Paese Cheese with Mustard Fruits and Piadina Bread is a big lavish board with everything tasting fresh and lively. Bread comes with olive oil and balsamic vinegar, just as it should.

Pork Milanese to follow was slightly oily but otherwise very good and on top of perfectly al dente pasta, while the pizza was remarkable from an oven on a ship –  properly thin and crispy with bubbling mozzarella and plenty of pepperoni, chili and spicy sausage.

And with four desserts to choose my  trio from – a fine tiramisu, a baked ricotta cheesecake with a cherry compote, and a rich chocolate torte with hazelnuts was my swift choice. The food at Le Jardin is every bit as good as a decent modern Italian restaurant ashore and in fact better than many. I went back lots of times as we cruised around the Canary Islands and always ate well.

Ã¢â‚¬ËœFor me the ambience of restaurant comes first,’ explains Marco accepting a pot of tea after checking it’s been done the way he likes it; ‘two teabags in the pot, yes?’ he quizzes the waiter,’then the service and then the food. The food should be excellent produce, perfectly and simply cooked’, these are his principles that guide Le Jardin as well as his pubs in the UK.

Service across his and all  the ship’s restaurants is modelled on a classic English five star hotel, a place Marco knows well having started his career in one. Waiters are everywhere and always on the ball. I saw one drop a knife as he set for the evening meal and he immediately picked it up and put it in the box for washing up even though nobody else was watching; many a waiter elsewhere would have simply carried on and laid it on the table. 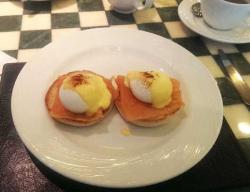 Ã¢â‚¬ËœGenerosity, that’s something I like too, not accountants and portion control,’ Marco says firmly. Certainly you can’t fault any restaurant on board for that, from the self-serve buffet to the main all-inclusive sit down restaurants.

Le Jardin does a beautiful breakfast too, think fresh juices and fruits, perfectly poached eggs and smoked salmon, a wide ranging lunch offer and big snacks available throughout the day until late at night. No extra charge. 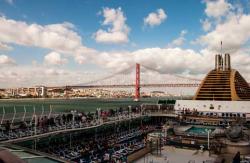 The next day Marco, resplendent in chef’s whites, does a Q&A with the passengers in the main theatre and fields some blunt questions with good humour. He’s a Yorkshireman despite his posh accent and many of his interrogators are too and they all get on well. 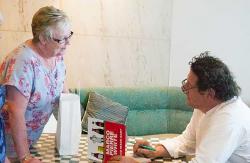 Then it’s off to sign some books, a large queue quickly forms and he poses for photos and signs away like a man who has never heard of repetitive strain injury.

That evening and every evening after on our way back to Southampton he strolls the tables of Le Jardin, totally at ease and always more interested in the guests than himself. The shark is swimming with the tide and clearly enjoying every minute of it.

Marco Pierre White restaurants with P&O:The White Room on board Ventura, Cafe Jardin on board Oceana, Cafe Bordeaux on board Aurora and the Ocean Grill on board Adonia, Arcadia and Oriana

A seven-night fly-cruise holiday on Ventura to the Mediterranean with Marco Pierre White starts from £1,099 per person. Departing October 8, 2014 the price includes return flights, resort transfers, an inside cabin on Ventura, full board meals, daily afternoon tea and entertainment on board. Ports of call include Venice, Koror, Corfu, Rome, Ajaccio and Genoa. To book, visit www.pocruises.co.uk, call 0843 373 0111 or contact your local agent.

Join Marco for master classes, cooking demonstrations, hosted dinners in his restaurant on board, The White Room, and hosted shore excursions to food markets and restaurants where applicable.