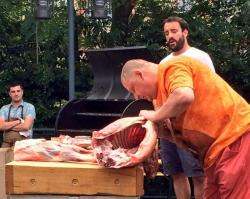 chicken is more than finger-lickin’.

It’s a good job A Certain Politician isn’t at Meatopia. The (reputedly) pig-lovin’ PM would be in as much distress as his alleged former amour if he’d witnessed a burly butcher going at a particularly fine porker with his chopper.

Luckily for all in attendance, the guy wielding the weapon today is only looking for lunch, not a lover. Master butcher Steve West is a man with an axe to grind – quite literally. The boys from Blacklock have demanded he chop up their whole hogs with the long-handled implement he’s toting around the festival site, but, to put it bluntly, the blade isn’t currently the sharpest tool in the box. It does the job, though, and after a few deft strokes the pigs are in bits and we’re all covered in bits of pig. I’d expected to suffer with meat sweats and a horrendous hangover, but not pork dandruff.

Not that it seems to bother anyone. In fact, all those in attendance are such meat fiends that it probably serves as a sort of catnip. If meat in your meat is not enough, you can have bacon in your Bloody Mary – or in Carl Clarke’s grilled pineapple jam. The same chef whips beef dripping into butter, whilst fellow burger-meister Fred Smith 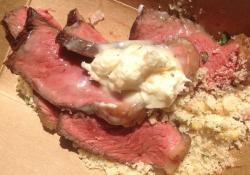 On the DJ BBQ-hosted Cutting Room stage, something is getting James Whetlor’s goat: the fact that the UK largely overlooks the meat he champions through his company Cabrito. Y’see, we don’t even allow most billy goats to live long enough to get gruff Ã¢â‚¬â€œ the vast majority are slaughtered mere moments after birth. But this so-called dairy industry’by-product’ can yield the sweetest meat, as anyone who tastes James’s kid goat shawarma or raw hand-chopped kibbeh quickly attests.

Raw isn’t too rare an occurence at Meatopia. Jose Gordon makes his super-aged steak into tartare, whilst in his’Rudolph’s Last Supper’ session, Finnish chef Matti Hurttia serves a venison sashimi so good I could swear Christmas has come early.

Later at The Cutting Room, I try Turner & George’s two inch-thick, thirty five day-aged grilled ribeye. The flavour is so 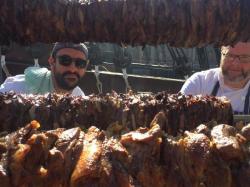 savoury and nutty it tastes as if the steak has been doused in blue cheese butter Ã¢â‚¬â€œ but it’s just the meat’s own majestic profile. The marbling we’re shown on the freshly-cut slabs is incredible; the fat creamy, yellow, abundant, and downright delicious when dancing flames crispen its edges.

As I’m like Jack Spratt, fat is fine by me. Accordingly, I stretch my stomach still further with two versions of lamb belly Ã¢â‚¬â€œ the first cooked by Kitty Fisher young buck Tomos Parry; the second by The Rum Kitchen’s Ross Clarke, who’s opted to give his meat a stimulating dunk in Kenyan coffee and add a saucy slick of Sriracha sour cream.

All that eating is thirsty work, so it’s handy that the Docker Ale somm-ale-ier Melissa Cole has co-created for the event with 40FT Brewery has been freely flowing since breakfast time. As the sun sets and the Paul Simon-playing New York Brass Band insists’You can call me Al’, we seek out a spirit we’ve been dying to try, and all agree that 58 Gin indeed warrants drinks expert Ian Buxton’s accolade of’number one gin to try before you die’.

Having single-handedly consumed all the inhabitants of Old MacDonald’s farm, it’s high time for me to stagger home. After 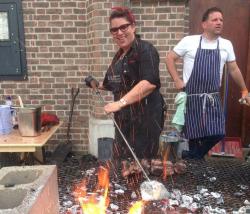 any other booze-fuelled evening out, it’s a safe bet I’d end up in bed with a kebab. Tonight, though, a sexy little salad is the only thing I tangle with.

But when I wake, there’s no chance of me going cold turkey. It’s breakfast time, there’s a big bacon sarnie with my name on it, and I’m a slave to the slogan:’Eat, Sleep, Meat, Repeat’.